The Daily Nexus
News
Seeking Solutions to Sexual Assault
November 13, 2014 at 5:00 am by Rachel Ann Reyes 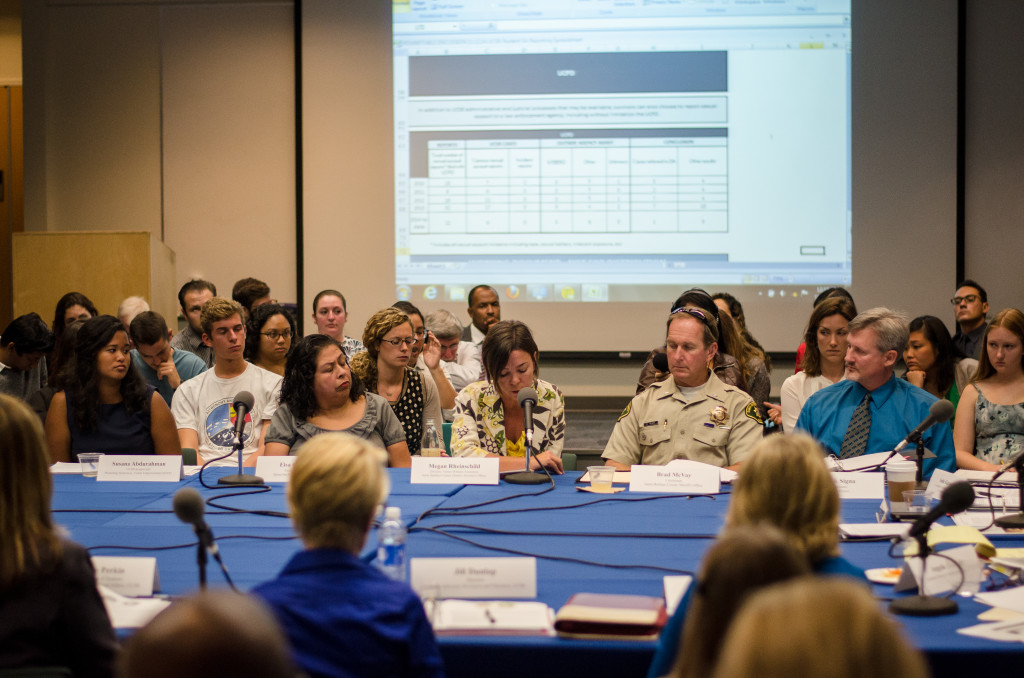 Senator Hannah-Beth Jackson and State Assemblymember Das Williams helped conduct the roundtable discussion to examine how the university responds to complaints of sexual assault and harassment, as well as what disciplinary policies and preventative education exist regarding sexual assault and harassment. According to Williams, the roundtable ended with an “overwhelming consensus” that campuses must do more to protect students.

“Nothing has really been done, at least effectively, to address campus sexual violence,” Jackson said. “[I’m] mad as hell about this situation … This is simply unacceptable.”

“We really need to address this problem through education, prevention, deterrence, treatment and action,” Jackson said. “Those who are found to have violated what is I think … is simply an appropriate code of conduct need to have drastic steps taken to punish and discourage that behavior going forward.”

Jackson said she is in support of legislative efforts toward ensuring that those who sexually assault individuals are rightfully prosecuted.

“Yes needs to mean yes,” Jackson said. “We can no longer accept a culture that excuses rape, that condones rape, that protects rape or sexual violence anywhere, let alone on our college campuses.”

One heavily discussed topic during the roundtable regarded the process by which non-UCSB student perpetrators are currently dealt with and how that process can be improved. According to Associate Dean for Student Wellness Angela Andrade, the university may look at cases where non-students are sexually assaulted or harassed, but can only administer punishments to UCSB students.

“We look at those cases and see if there’s anything we can do, but ultimately … our campus regulations [only] gives us the authority to discipline students that are enrolled at UCSB,” Andrade said.

Benjamin Partee, the Dean of Educational Programs at Santa Barbara City College, said that while SBCC does not have their own police team to enforce anti-sexual assault policies, the college maintains good communication with the SBCC Office of Student Life, Isla Vista Foot Patrol, the Santa Barbara County Police Department and UCSB Police Department.

“I believe we’re going in the right direction as two entities that have individual students in Isla Vista,” Partee said, “and it’s our hope that we can help eliminate the assaults.”

Katie, a UCSB student and sexual assault victim who chose to withhold her last name for personal reasons, said her experience working with the university was entirely positive, in terms of academic accommodations and understanding her options, but that problems arose along the way.

“My real issues didn’t start until the investigation got underway with law enforcement,” Katie said.

Katie said she made the report because she did not want to be one of the many victims of assault who do not have their case heard. However, Katie said she encountered “a lot of insensitivity” in the way IVFP dealt with her case.

“It was just a process of re-victimization,” Katie said. “I feel like I went through way more pain than I needed to and had to tell way more people my story. Things don’t get to a hearing because there are so many reasons that people are discouraged before having a chance to get to there.”

UCPD Lieutenant Mark Signa said that sometimes officers working with sexual assault and harassment victims fail to handle the situation out of a lack of understanding and experience.

“We need to continue to work on that training and to make an effort to build that relationship and improve our abilities to work with the survivors of these assaults,” Signa said. “It’s an ongoing process, we’re not perfect. We’re trying to do the best we can. We need to do better.”

Jackson said she applauds progress made to combat sexual assault and harassment cases on campus, but that they are only beginning and that more serious punishment for perpetrators are in order.

“[Students] are going to be our leaders in the future, and if we cannot do that then we have failed the university,” Jackson said. “We will have failed our young people, both men and women, and we will not be doing our job.”

Jackson also said she feels frustrated that, despite years of activism, not enough has been done to establish a “culture of no excuses.”