The Daily Nexus
Opinion
Curiosity Killed the Cat (But Orgasmic Pleasure Brought Him Back)
November 13, 2014 at 7:00 am by Matt Togni 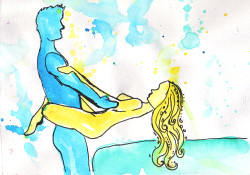 You know you’ve experienced it … you’re at a party with your girlfriends, taking shots, nerves feeling loose, when suddenly something else starts to loosen up, too.  It’s supposed to be a girl’s night, and it most definitely is, but now you’re starting to feel horny for reasons you can’t really understand. Then, your group’s favorite song comes on, and just as T-Swift is going on about how “miserable and magical” you’re feeling (in the best way of course), you turn to your best friend and realize how hot she looks in that crop top and short shorts.  You’re singing, you’re grinding and out of nowhere you’re making out … What happens next is history — well, her-story really — because you let curiosity get the best of you and quite literally let the cat out of its tight, zippered bag.

Let’s be honest (or should I say lesbihonest?): Sometimes, you just want to experiment outside of your sexual norms. As a gay man, there are plenty of times I like to hook up with girls just for fun, and while most of these experiences are purely erotic, devoid of any romance whatsoever, they still happen and I enjoy every second of them. With that said, I’m not the type to cuddle a girl. To be honest, I don’t even hold hands with girls and not because I don’t like them or don’t think that they’re pretty, but really because I reserve romance for men — probably because I’m gay. Still, I like to venture out and try new things, and, to be totally honest with you, I’d call you a liar if you told me that you never at least thought about doing the same.

The really interesting thing about experimenting with other genders is that many of us have thought about the idea of doing it, but never really the act of doing it. What I’ve found in that past is that our brains separate eroticism and intimacy pretty well … because, let’s be real, it’s not like you want to date last Saturday’s dime piece or even your fuckbuddy. Sexual chemistry and romantic chemistry are two pretty different, albeit intertwined, concepts. I sleep with a lot of different guys, for instance, but I don’t have romantic interest in most of them, and the same goes for when I’m experimenting with girls. With that said, the first step in turning your experimental thoughts into sexual actions is to stop and realize that your sexual attraction to someone and your romantic attraction to someone are totally different from each other.

Once you’ve started to realize that intimacy and sex are totally separate concepts, you need to ask yourself: Do I want to do this?  Experimentation isn’t for everyone, and I’m not going to be the first to tell you that if you’re not comfortable breaking through your sexual boundaries just yet, you don’t have to. Still, it can be really fun to start slow, and most girls will agree that tipsy makeout sessions with your best friends can actually be really fun. And men, don’t be afraid to break social norms either, because, I’m sorry, but grabbing No. 49’s ass after the football game isn’t really that far from kissing; rather, it’s just one of many socially acceptable forms of male-on-male eroticism.

With that said, I’m also here to tell you that finding members of “the other gender” (the one you don’t normally find sexually appealing) attractive doesn’t have to dictate your sexuality as a whole. I think it’s funny when straight guys ask me, “Well, how do you know if you’re gay if you haven’t tried girls yet?” Why? Because I have slept with girls and guess what, the V just doesn’t really appeal to me like the D. So on the flip-side, why have I slept with girls if I know that I’m gay? Because it’s fun. Like, really fun … it’s totally a spur-of-the-moment type thing that happens just as randomly as group sex or BDSM, and doesn’t make me straight or bi or pan or anything for that matter. Only you can define your sexuality — nobody else. And to all you straight folk out there, I’m here to tell you that flipping to the other side for a night won’t make you gay. If it did, let’s be real, I’d have a lot more gay friends than I do right now.

All in all, experimentation can be a really fun way to spice up your sex life and explore your own interests. While lots of people are afraid of the idea of experimentation, realize that almost everyone I know has had some sort of “out-of-the norm” sexual fantasy that they couldn’t really explain, and that it’s okay for you to have them, too. In essence, sexuality isn’t black and white at all. In fact, it’s a rainbow of colors that blur together and coexist in absolute awesomeness that knows no boundaries and has no limits. In closing, let me leave you with a fun little motto I’ve recently decided to live by: Fuck the rules, because fucking rules.

Matt Togni is happy, free, confused and lonely at the same time.

It is shocking to think that the Daily Nexus allows this moral and intellectual offal to be published.

I know, right! I mean, who does this guy think he is, exercising his first amendment rights?! Everyone knows sex is WRONG! All references to sex must be BANNED!

The Daily Nexus is free to publish what it wishes to publish. Nevertheless, it is unfortunate, as I said, that they choose to publish such inane, vulgar and morally depraved ramblings of this deviant. And, of course, there is nothing wrong with talking about sex. The talking about sex isn’t the issue here. What is depraved and disgusting is the view of sexuality that this author espouses and the vulgarity with which he expresses this offal. Sex is something upon which moral obligations obtain and is much more significant than the dim view of it that this author seems to… Read more »

Moral obligations? For Pete’s sake, the man isn’t advocating incest. What’s Matt’s account of his sexual lifestyle going to do? Bring back the free-love movement? The hippies? Tie-dye as a fashion trend?

You are entitled to your opinion. But honestly, name calling? Deviant? For whatever imaginary crime you think Matt has committed, at least he hasn’t stooped to an elementary-school-bully mentality.