The Daily Nexus
News
Companies Compete To Cure Water Issue
November 13, 2014 at 5:00 am by Celene Chang 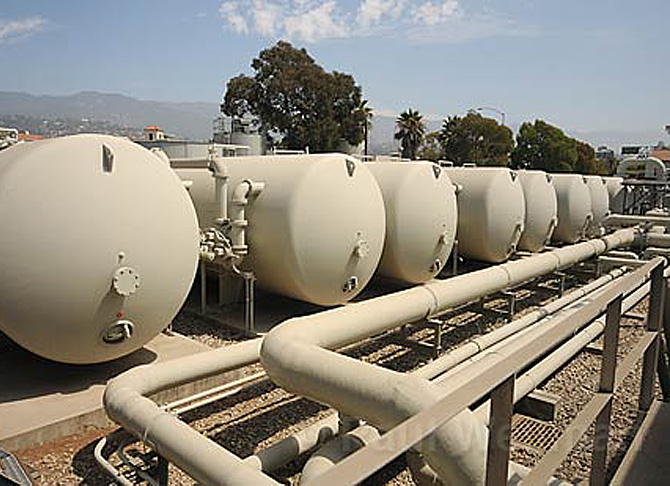 The Charles E. Meyer Desalination Plant plans to produce around 3,000 acre feet of
drinking water per year but has the capacity to produce 7,500 acre feet per year. Photo Courtesy Of UC Davis Center For Watershed Sciences

The Design Build Operate (DBO) plan will combine various companies from different backgrounds in order to address all aspects of reactivating the plant. The three DBO companies include Acciona/Filanc, IDE Technologies/Kiewit and AECOM/Veolia.

The Board of Water Commissioners Project engineer Bob Roebuck said the committee is looking to request a proposal from the companies this coming Monday, Nov. 17, which will be confirmed in April depending on precipitation levels.

“We’re looking at awarding a contract on April 7,” Roebuck said. “Here’s a caveat — if we have a lot of rain this winter season, then we would delay issuing the contract.”

According to Roebuck, the amount of rainfall the City of Santa Barbara receives this coming winter and the amount of water in store in the reservoirs will affect when the city will start awarding contracts to begin construction. The desalination plant is currently scheduled to begin construction around April 2015, and to be completed in June 2016.

Roebuck said the committee plans to keep the desalination plant producing around 3,000 acre feet per year unless the drought continues, at which point the city will request an increase of production up to 7,500 acre feet by next year.

“Initially we are looking for it to produce 3,125 acre feet per year,” Roebuck said. “The permit allows it to be increased in size all the way to 10,000 ft.”
According to Roebuck, the approximate capital cost of the entire project is estimated to be around 30 to 40 million dollars.