The Daily Nexus
News
Three Plays Grace the Stage for One Acts Series’ 50th Anniversary
November 10, 2014 at 5:00 am by William Leiva 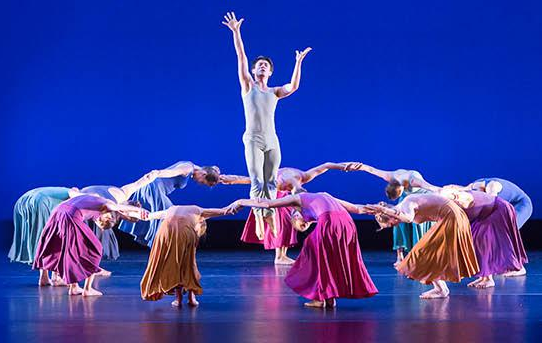 The department of theater and dance presented the 50th anniversary of their One Acts series, a weekend of one-act undergraduate plays presented Friday through Sunday.

The One Acts consisted of three twenty-five-minute-long plays covering various topics including identity, control, relationships, eating disorders, sexual assault, insecurities and self-harm. The first play, “Degas C’est Moi” depicts French painter Degas and his constant obsession with his own identity. The second play, “Barefoot in Nightgown by Candlelight,” is a story about power. The last play, “The Most Massive Woman Wins,” depicts the experiences of women suffering from bulimia.

Fourth-year theater and dance major and director of “Most Massive Woman Wins” Kirsten Nygaard said the series event is a senior project that must be approved by the theater department to count towards her emphasis in directing.

“The One Acts is entirely orchestrated by students,” Nygaard said. “It is not only a senior project that I must fulfill, but it is also a continuance and commemoration of the theater department’s hard work to provide the One Acts’ 50th anniversary for students to enjoy for free.”

According to Becca Gilbert, theater and dance major and director of “Barefoot in Nightgown by Candlelight,” although the plays are free, donations help keep the program going. According to Gilbert, the play told the story of three young girls who played dangerous, risk-based games in an exploration of how power affects relationships.

Gilbert also said the audience should take in all three plays instead of choosing a favorite.

“I do not think it is important to favor one play over the other,” Gilbert said. “They’re all different and all equally important and beautiful. I also think it’s important not to focus on one of the plays because the show and the event is really about all three of the shows, not just one.”

Fourth-year theater and dance major and director of “Degas C’est Moi,” Nabra Nelson said her play differs from the others because of its focus on comedy and the notion that happiness is found through human connection.

“Mine does not tackle any larger societal issues,” Nelson said. “My play is lovingly hilarious and about finding true happiness through human connection and relationships rather than fame or recognition, so I hope that audiences come away from it thinking about their priorities in life and hopefully taking some time to appreciate those that are close to them.”

According to Nelson, participating students have worked all quarter to put together quality performances, with rehearsals lasting 20 hours per week since the beginning of the quarter.

Gilbert said the project gives young artists a platform to display their talent and share the play’s distinct themes.

“The One Acts are important because they are a showcase of all student work. They provide a platform for student artists to collaborate and create some brilliant work,” Gilbert said. “We are all very excited to share these themes with the audiences.”

Fourth-year theater and dance major and performer in “Barefoot in Nightgown by Candlelight” Lauren Mercier said she tried to inform audiences about issues surrounding sexual violence through her character role.

“My character tried to forget about her rape instead of embracing it,” Mercier said. “It is important to inform the audience because it can trigger traumatic events for people who have been sexually abused.”

Fourth-year theater and dance major and actress in “The Most Massive Woman Wins” Kali Deming said her character, Rennie, plays a crucial role in describing the life of a woman who struggles with body image and maltreatment.

“Rennie struggles with bulimia. My favorite part of the show every night is sharing Rennie’s story — sharing what has led her to where she is. Many people have mistreated Rennie in her lifetime, and bulimia is her coping mechanism,” Deming said. “Rennie shows people not only how dangerous eating disorders are, but also how dangerous it is to treat someone poorly. Her story reminds a person to act with kindness and love, which is really the root of most problems.”

Deming said she hopes the audience comes away with a different perspective on the meaning of beauty.

Deming said she hoped her play resounded with any audience members who struggled with eating disorders.

“Eating disorders are so prevalent today. There should be a handful of people in the audience for every person that has either struggled with an eating disorder themselves, or have known someone who has,” Deming said. “I hope to touch them, to reassure them, to help them believe in themselves. And I hope to show people that this is a problem and we do need change.”