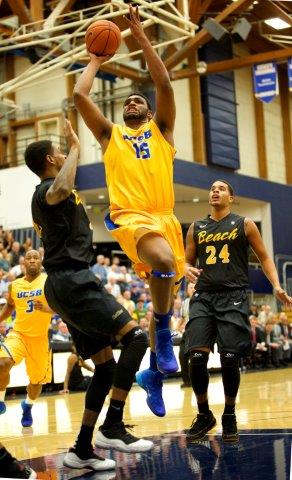 Senior center Alan Williams enters as one of the best players in the nation and leads an experienced UCSB team. (Daily Nexus File photo)

It’s been nearly eight months since the UCSB men’s basketball team last played in a competitive game, an ugly 31-point loss to Cal Poly in the Big West Tournament quarterfinal that dashed hopes of the program’s first NCAA tournament appearance since 2011.

Tonight at the Thunderdome, the Gauchos embark on another campaign to capture the Big West championship when it plays Point Loma Nazarene University in the team’s lone exhibition match of the season. Headlined by senior center Alan “Big Al” Williams, UCSB enters with its best opportunity of reaching the Big Dance in recent memory.

Picked to finish second in the conference in the Big West Media Preseason Poll, Santa Barbara has the pieces to top the conference standings and end the year ahead of preseason favorite, UC Irvine.

The team will center around Williams, the 2014 Big West Player of the Year. He is predicted to repeat his performance of last season when he averaged 21.3 points per game, 11.5 rebounds and 2.4 blocked shots per game, one of the best statistical seasons of last year.

Williams was recently ranked as the No. 29 college basketball player in the country by ESPN and his inside presence and offensive efficiency is the reason why. Last year, Big Al took the fourth-most shots in the nation, taking 37.2 percent of UCSB’s shots and still averaged a 57 percent shooting percentage from the field.

His strength in the paint and hustle crashing the glass make Williams one of the best players in any conference. Now in his final opportunity to reach the NCAA tournament, the big man is poised for another big season.

Williams’ production is a given, but perhaps a greater indication of the Gauchos’ success this year will ride on his teammates’ play. UCSB returns four starters from last season including junior guard Michael Bryson, whose three-point shot gives the Gauchos a perimeter threat. Bryson was second on the team last year at three-point shots made with 55.

At the point, the Gauchos have one of the best ball handlers in the conference in senior Zalmico Harmon. In his first season with UCSB, Harmon averaged 5.1 assists per game, second in the Big West. More impressively, he ranked second in the nation in assist-to-turnover ratio at 4.6-to-1.0.

With the return of junior guard T.J. Taylor and junior forward John Green from injury, the Gauchos also have depth at the bench. Taylor returns after having missed all of last season due to hip surgeries; before last year, he started 33 games at the point. Green, who has only played four games in three seasons because of injuries, brings athleticism for the Gauchos.

Although Santa Barbara does not officially begin the season until Nov. 14 when it travels to take on college basketball powerhouse, No. 5 Kansas, the Gauchos still have to face Point Loma first.

Point Loma, located in San Diego, is in its first season as a member of the NCAA, competing in Division II. In their first preseason game against San Diego State, the Sea Lions lost 74-45, as only one player on the team scored over six points in the contest.

Tip-off for tonight’s game is scheduled for 7 p.m. in the Thunderdome.