The Daily Nexus
Previews: What's Going On
Mitchell Kriegman to Come to Discuss “Finding Your Voice in TV”
November 7, 2014 at 3:29 pm by Erika Lee 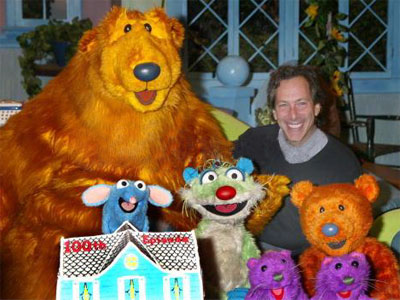 Are you interested in breaking into the entertainment and film industry? Did you grow up watching cartoons on Nickelodeon and are curious about how they were created? Do your Friday night plans include watching Netflix or scrolling through your Instagram feed for the hundredth time? If you said yes to any of these questions, here’s a perfect opportunity to spice up your evening. Tonight, Magic Lantern Films in I.V. Theater will host a special talk, Q&A and book signing with novelist and screenwriter Mitchell Kriegman.

With over twenty-five years of screenwriting experience under his belt, Kriegman is a veteran of the television and film industry. Some of his credits include writing for “Saturday Night Live”, “Rocko’s Modern Life” and “Rugrats”. Not to mention, he’s the creative genius behind beloved children shows “Bear in the Big Blue House” and “Clarissa Explains it All”. Kriegman is also the founder of his own production company and has taught film and writing at a local university in Southampton, New York. During his talk, this Renaissance man will be sharing his crazy stories about working in television as well as giving valuable advice in finding your voice as an artist. Exclusive clips from shows that he has worked on will be shared onscreen.

In addition to his extensive work in TV and Film, Kriegman is also the author of “Being Audrey Hepburn”. The novel tells the story of a nineteen-year-old girl who escapes her humdrum life through a fascination with her classy idol, Audrey Hepburn. After trying on Hepburn’s famous black Givenchy dress, her life is transformed into a whirlwind of glamour, excitement and drama.  In Friday’s event, he will be signing copies of the novel after his talk. The $4 ticket price at the door will count toward each attendee’s purchase of “Being Audrey Hepburn” at the end of the event, which will available at Chaucer’s Bookstore.

To sum it all up, it’s going to be a four-part event at I.V. Theater: a screening, talk, book signing and Q&A session — a recipe for an awesome night. Whether you’re a young college student who dreams of making it big in Hollywood, but doesn’t know where to start or just somebody curious about the dazzling and mysterious world of showbusiness, you will definitely be in for an intriguing night with the jack-of-all-trades, Mitchell Kriegman.

For more information on Mitchell Kriegman, go to beingaudreyhepburn.com.

Great post. I was checking continuously this
weblog and I am inspired! Extremely useful info specially the last phase :
) I handle such information a lot. I was seeking this particular info for a long time.

Thank you and good luck.