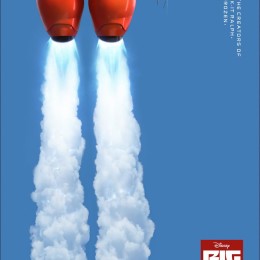 A star on Hollywood boulevard reads “DISNEYLAND: Award of Excellence Special Achievement for 50 years of Magical Entertainment.” Whether it’s through the meaningful soundtracks or the valuable life lessons, Disney’s spoonful of magic has helped many people follow their dreams and believe in themselves.

This Friday, Nov. 7, Disney ventures beyond its classic tales of fairies and princesses and delves into the modern world with “Big Hero 6.” The creators of “Tangled” and “Frozen” have packed humor, emotion and action into this soon-to-be classic. Set in the futuristic city of San Fransokyo where cable cars hang Japanese lanterns, “Big Hero 6” reveals the story of a robot who just wants to help.

It redefines what it means to be a family.

“Big Hero 6” affirms that family is not just the kind you’re born into, it’s the kind you find along the way. Producer Roy Conli of “Tangled” puts this idea at the movie’s core. “It’s a powerful theme that audiences relate to. The nuances of the relationships in deeply emotional films like “Bambi” or “The Lion King” are so interesting. There’s something about these stories that can really touch people,” Conli explained.

In line with the atypical sibling protagonist pair of “Frozen,” BH6 features brothers Hiro and Tadashi Hamada who promote the idea that platonic love conquers all. The Hamada duo also spearheads a new ethnicity that Disney had not explored until now: hapas (half Asian, half Caucasian).

Baymax, the huggable robot, has all the solutions.

Don’t be fooled by Baymax’s lack of facial expression and human brain. This plus-sized inflatable healthcare companion will make you laugh, cry and love. Baymax was invented by Tadashi to revolutionize the medical world by scanning patients to diagnose and treat their issues. He diagnoses Hiro with puberty, asking, “Will catching the bad guy stabilize your pubescent mood swings?”

Whether you’re experiencing puberty, collegiate worries or just having a rotten day, Baymax has the solution.

Its unconventional friendship warms your heart.

Just as mountain man Kristoff and his reindeer Sven form the unconventional friendship in “Frozen,” so do Hiro and Baymax in BH6. This compassionate robot provides sorely needed emotional support for Hiro. Their relationship will warm your heart, and their banter will split your sides.

“I fail to see how flying makes me a better Healthcare Companion,” says Baymax when Hiro upgrades his features. “I fail to see how you fail to see that it’s awesome,” responds Hiro. When Baymax has a low battery (the robot equivalent of intoxication), Hiro helps him reach home like a true friend.

It will have you rock out.

The music score celebrates the action and emotion of BH6 with a 77-piece orchestra infused with synth sounds and new music from Fall Out Boy. “We wanted a score that was melodic with prominent themes, while pushing technical boundaries with electronica music, too,” said director Don Hall.

Fall Out Boy wrote and performed the music to the scene in which Hiro transforms his uber smart college friends into high-tech heroes. “They’re testing out their new super suits for the first time in the scene,” said Pete Wentz. “You get the sense that they’re stepping into a bigger role. The story’s in the DNA of Fall Out Boy. It is an authentic story and it’s who our band is — we’ve always identified with the underdog.”

It teaches how to be a true hero.

A buff Greek guy once said, “A true hero isn’t measured by the size of his strength, but by the strength of his heart.” In Hiro’s case, his strength lies in his mind. He is forced to deal with a huge problem when disaster hits. Unlike Hercules, Hiro does not have a sarcastic satyr (half man, half goat) at his side. He must find courage within himself using only his brain, a dream and a puffy robot.

“It’s really a hero’s journey. The friendship Hiro forms with Baymax opens his eyes to what it really means to be a hero,” said director Chris Williams.

So what are you waiting for? Something amazing, you guess? Then come join Hiro’s family and let Disney help you find your inner hero. Remember: Dreams do come true. All it takes is faith, trust and — you know the rest.

“Big Hero 6” is playing at the Camino Real Marketplace Theater all weekend. Jane Huson recommends that you stay in your seats for the credits, since something amazing is supposed to happen.

Copy and paste for a free virus! Infect yourself now and you’ll get malware, absolutely free too!