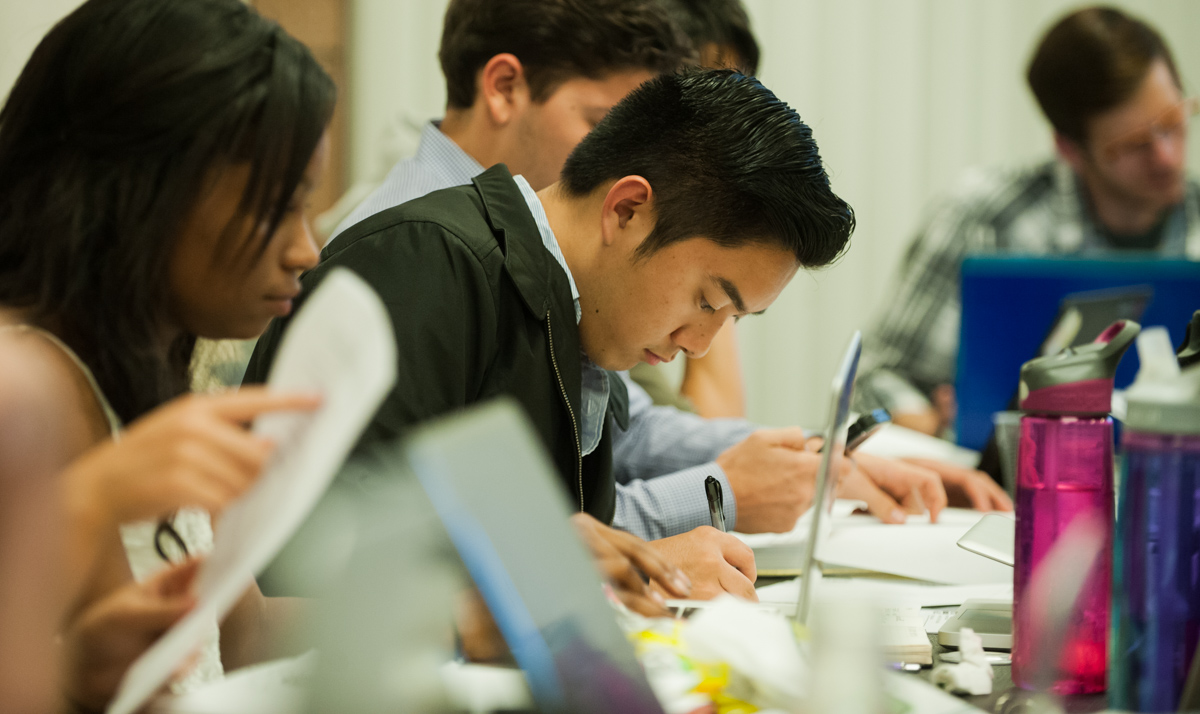 Senators discussed the issue of ratifying the Finance and Business Committee request to freeze S.C.O.R.E.’s funds. If approved, all student delegates selected for the Student of Color Conference this weekend will not be allowed to attend. Kenneth Song/Daily Nexus

Last night, the Associated Students Senate met in the UCen’s Flying A room to discuss a variety of issues and receive input from several community members.

The primary focus of this week’s meeting was the potential freezing of the Student Commission on Racial Equality’s (S.C.O.R.E.) funds. The A.S. Finance and Business Committee has recommended that the Senate freeze S.C.O.R.E.’s assets “based on allegations that SCORE violated student government bylaws through their Student of Color Conference (SOCC) delegate selection process,” according to a statement released on S.C.O.R.E.’s Facebook page yesterday.

No members of S.C.O.R.E. were present at last night’s meeting.

During public forum, Senator Nikka Kurland spoke for A.S. President Ali Guthy saying the president opposed the freeze. Chief Financial Officer of the A.S. Finance and Business Committee Andre Theus requested the Senate not ratify the freeze approved by the committee on Monday.

“I am recommending that you not ratify the freeze,” Theus said. “Just to explain why I thought the freeze should happen is just that there was a lot of discrepancies happening … I think that’s the best resolution to this issue.”

A.S. Controller Amir Khazaieli spoke in favor of freezing S.C.O.R.E.’s funding based on the organization’s lack of disclosure about Student of Color Conference (SOCC) funding, a UC Student Association gathering to take place this weekend at UC Merced.

“According to policies and procedures, everything that [Finance and Business Committee] funds has to be open to all students in some way, shape or form. Nothing is, as of now, transparent in regards to this issue,” Khazaieli said. “Students have no say in who’s running [S.C.O.R.E.], how much money is spent on SOCC, what the sources of funding are for SOCC and how members of the SOCC delegation are chosen.”

As A.S. Controller, it is Khazaieli’s job to make sure student fees are being allocated properly and in accordance with A.S. bylaws. Khazaieli said S.C.O.R.E.’s leaders are currently spending student money improperly.

“I have an inconclusive set of data at my disposal to figure out whether or not student fees are being spent properly,” Khazaieli said. “I have to deem [the data] an inconsistent use of student fees.”

In its press release, S.C.O.R.E. maintains that its current process for selecting students to SOCC is fair and compliant with A.S. regulations.

“SCORE stands by its selection processes and deeply condemns [Finance and Business Committee] for attempting to freeze all of SCORE’s funding, which is used to support organizations and events that promote issues of diversity and inclusion of students of color at UC Santa Barbara,” the press release stated.

Senator and A.S. Finance and Business Committee member Jimmy Villarreal spoke to the Senate to summarize the committee’s thought process behind the freeze recommendation.

“When we asked the representatives from S.C.O.R.E. questions they weren’t always 100 percent able to answer them. I want you to know I do not think they misused funds on purpose at all,” Villarreal said. “Because the [Finance and Business Committee] wasn’t really able to decide one way or the other [whether or not funds were being misused], we recommended a freeze. There is an issue of communication between S.C.O.R.E. and the rest of the Association.”

Senator Nadia Blant said the proposal was pointless to approve, and would only waste time.

“I want to table it indefinitely because this whole thing is really tedious and unnecessary and it could stop a lot of things in the process that are unnecessary,” Blant said. “We shouldn’t be deciding anything right now, if anything we should be talking about it later but deciding something and sticking it on at the end of this bill that really doesn’t make any sense if you think about it, would be a waste of our time.”

The Senate decided to table the motion indefinitely and to take no further action.

“There’s no point in us pretty much cancelling this out. We’re pretty much silencing people’s voices,” Goulhiane said. “Giving them this extra time just until Sunday allows them to actually be able to voice their opinions.”

Goulhiane said that according to the A.S. Legal Code, a certain number of votes must be met during the elections and so far there has been a low voter turnout.

“We had three percent on Tuesday, based off of what I just heard today,” Goulhiane said. “After a day we reached five percent.”

According to Goulhiane, in order to pass the A.S. Legal Resource Center fee increase on the ballot at least 15 percent of the total students’ voter population have to vote yes on the referendum.

In addition to the needed 15 percent of votes, the fee increase will only become valid with a “20 percent overall turnout,” according to A.S. Executive Director Marisela Marquez.

Martinez said the Senate is also to blame for the contradiction between the elections committee’s decision and the Senate’s decision regarding putting the bill on the ballot.

“They as a committee voted not to have this put on to the ballot and then we, as Senate said ‘Yes, we should put this on the ballot,’” Martinez said. “So technically, this shouldn’t even be on the ballot, because this campaign bond was never submitted and we were all aware of it.”

“As Senators, we’re also representing our student community,” Koo said. “People not having the opportunity to read the language in the ballot is, in my opinion, very wrong and unfair towards both the LRC and the candidates who are running.”

The Senate discussed other options in reaching the required percentage of students needed to vote, but ultimately decided against the resolution to extend the special elections deadline.

The Senate also approved a bill that outlines guidelines for publicizing conferences and retreats as well as clarified consequences for not attending these events.

A version of this story appeared on page 3 of Thursday, November 6,2014’s print edition of the Daily Nexus.