The Daily Nexus
Sports
Andy Perez: The Ultimate Team Sacrifice
November 6, 2014 at 4:59 am by Michael Jorgenson 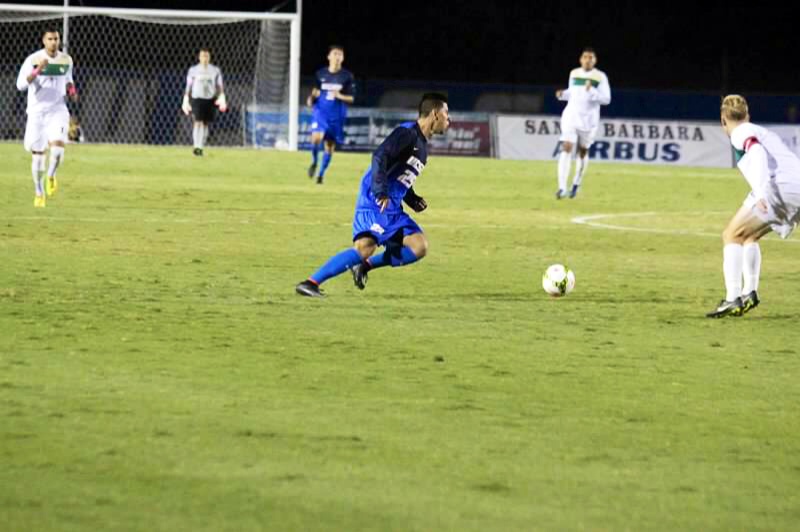 Winning in team sports is all about sacrifice. Day in and day out, athletes at every level sacrifice their time, their bodies and their blood, sweat and tears in the name of something bigger.

After all their hard work and determination, it’s safe to say that most of these athletes would do anything not to jeopardize their chances of making it big. Sometimes though, as was the case for midfielder Andy Perez of the UCSB men’s soccer team, things don’t always go according to plan.

Coming into the 2014 season, Perez was one of a large handful of underclassmen on a very young Gaucho team that still had much to prove. After a relatively quiet freshman year in which he appeared in just nine games, the Los Altos native had some uncertainty in terms of his role coming into his sophomore season.

After not seeing the field about a month into the season, Perez openly voiced his concerns to Head Coach Tim Vom Steeg.

“I’ve always aspired to be a starter or a strong contributor off the bench and this year I was a little worried that maybe my game wasn’t as developed as it needed to be,” Perez said. “I went to Tim and I told him that I think we should really discuss the opportunity of me redshirting.”

Vom Steeg agreed to Perez’s proposition, using stellar senior teammate and starting right back Kevin Garcia-Lopez, who redshirted his freshman year, as an example of how the situation could potentially benefit not only him, but the team as well.

However, after Perez sat out for the first 14 games of the season with no intention of playing, the circumstances surrounding the team changed. The Gauchos had been torn apart by injuries and suspensions, resulting in a mid-season slump in which they went 0-3-1 in four-straight road games, jeopardizing their chances of even qualifying for the Big West Tournament.

Then, after junior midfielder Adam Carn-Saferstein tore his MCL in practice, Vom Steeg had to make a radical decision.

“We literally ran out of midfielders,” Vom Steeg said. “I called Andy into the office after practice and I said, ‘I need you to play. We’ve got five games left and I need you to start on Wednesday.’”

For Perez to give up his redshirt season with just five games remaining, he would be giving up an entire year of eligibility, potentially hurting his lifelong dream of making it to the pros. The shocking request was not easy for him to hear and after telling his coach that he would think about it, he turned to friends and family for support. His father, being a former member of the San Jose Earthquakes, gave him perhaps the most important advice of all.

“My dad actually played professional soccer, so he has a little more insight,” Perez said. “He told me that although it does put me in a very difficult situation, Tim is my coach. He’s the one who brought me to this school and if he needs me, then I’ve got to do what my coach says.”

Finally, a conflicted Perez turned to Vom Steeg, sending him a text message asking for guidance prior to making his final decision.

“His response was very, very positive, telling me that he felt like I could be the spark to help us win some games,” Perez said. “After I read that text I was just like, ‘Okay, if you believe in me then I’ll do whatever I can to help the team out.’”

Perez made his first start in UCSB’s next game against Sacramento State. In a must-win situation, he felt more pressure than normal as he stepped into the Gauchos’ depleted midfield.

“The whole day before, I was a little nervous because I felt like there was a lot of pressure on me to come in and make a difference early,” Perez said. “Literally, the first 15 minutes of the game I wasn’t thinking about anything else but scoring.”

It didn’t take long before what seemed like a scripted story began taking place. In just the 17th minute, sophomore left-winger Ismaila Jome sent in a low cross towards the six-yard box that somehow reached Perez. Fighting off a defender, he got just enough of a touch to roll the ball just past the keeper and inside the left post, giving him his first career NCAA goal.

Since rejoining the team, Perez has started every game and the Gauchos have gone an undefeated 3-0-1. Their recent run of good form has earned them a first-round bye in the Big West Tournament and home-field advantage throughout.

While Perez is not the only reason that UCSB has performed so well under pressure this year, he certainly has provided the spark that Vom Steeg saw in him. Although he has given up almost a full season on the bench that he will never get back, Perez’s sacrifice has shown everyone what it truly means to be a team player.

A version of this article appeared on page 8 of Thursday, November 6, 2014th’s print edition of the Daily Nexus.