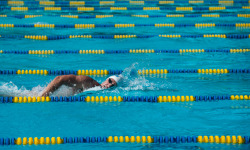 This Friday, the UCSB men’s and women’s swim teams will once again play host in a non-conference event against UC San Diego.

Coming into the weekend, the Santa Barbara men hold a record of 1-1 and the women stand at 2-1. Both teams remain undefeated in conference play. The San Diego men’s and women’s teams each will head north with a record of 1-0.

“This school is, without a doubt, one of toughest that you will see in Division II,” Head Coach Gregg Wilson said. “It is going to take a lot of preparation this week and focus when the time comes to come out on top on Friday.”

San Diego has had just one meet in its season so far, but it dominated in that competition against Claremont-Mudd-Scripps. The men took the victory 178-117 and the women coasted to a 182-111 victory.

This UCSD team is a familiar one to the Gauchos, especially to a particular member of the Santa Barbara coaching staff. Associate Head Coach of the Gauchos, Matt Macedo, became a Gaucho just this very year after serving three years as the head coach of UCSD. This will be his first interaction with his old team since he left in July.

“These next two weeks are going to be very important to us with the [Arena Invitational Meet] just around the corner,” Wilson said. “We want to see improvements and, of course, succeed in these next two meets, but we also want to make sure that we are rested and in good shape for that test down the road.”

The meet is set to kick-off this Friday at noon at Campus Pool.