The Daily Nexus
Sports Blogs
#YesAllAthletes
November 5, 2014 at 5:00 am by Sarah Stigers 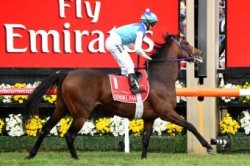 The death of race horse, Admire Rakti, has sparked debate on banning whipping in the sport. Photo courtesy of abc.net.au

Today my blog is a bit off my normal topic as something large has struck me that I believe deserves some recognition. When we think about athletes, we think of the men and women on a court or field, with a ball or competing on a track. But horses involved in horse racing are as prime of athletes as any human and the tragedies that have been occurring to our four-legged athletic counterparts need more recognition.

According to a rather depressing website called HorseDeathWatch.com, there have been 1,171 deaths in 2,795 days, as the large red and white numbers on the site glare up at me. The most recent is a horse by the name of Kneesy Earsy Nosey, who died yesterday from a broken hind leg.

The most news breaking occurrence that sparked this topic was the death of a Japanese horse called Admire Ratki, who died shortly after he finished his race at the Melbourne Cup in Flemington, Australia last week. The autopsy reports that Ratki died of an acute heart failure.

However, Ratki was not the only horse to die that day as another competitor was euthanized after it broke its leg from

being spooked from the crowd. This event follows the death of a mare in last year’s Melbourne Cup, which was euthanized after snapping a leg during the race.

But why is this so? Why are these horses dying and deteriorating on the racetrack? As Ward Young, spokesman for the Coalition for the Protection of Racehorses (CPR) said, he believes that horses are being used to race while still “under-developed” at two years of age, along with suffering from the use of whips and pressure to push these animals to the brinks of their “physical limits,” are prominent reasons why we see increased death rates of these athletes.

I feel like I’ve always heard stories about how horses like to run and the riders feel that they are competitive creatures, but once reading on how these animals are treated off the course, pumped with drugs and worked until they literally collapse in their stalls is more than I can handle. These deaths have sparked a trend to erase the use of whips from the sport and banning two-year-old horses from competing.

From my point of view I find it difficult to imagine how any athlete could condone the treatment of other athletes this way. Some people see the animals as just that, but no one really thinks about the fact that these animals cannot say no to the steroids and other drugs they are pumped with.

It’s time that we as a sports loving community stand up to the rights from which these athletes are being stripped, and urge the sport to support and maintain cruel free, drug free conditions, and let the horses do what they do best: run.