While some of you were out scouting parties on DP this Halloween weekend, the real celebration took place at the Santa Barbara Bowl. Some of the hottest contemporary Latin bands and DJs killed it onstage Saturday night in celebration of Día de los Muertos. For this special event, Santa Barbara Bowl became the center of art, music, dance and cultural festivities in remembrance of the dead. 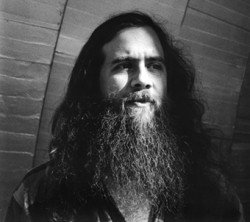 Doors opened at 4 p.m. and visitors were immediately welcomed with brightly colored banners, vibrant piñatas and the mystical music of DJ Carlos Niño. Paving a path to the seating area, there were multiple places to stop for face-painting as well as community alters to pay respects to lost loved ones.

At 5 p.m., people began to settle down in their seats while Hy Brasil started the night off with their signature harp rock ‘n’ roll. Lead vocalist Wyatt Hull let his long hair flow while he jumped around, singing and dancing in his cool leather jacket. Before their second song, Hull stopped for a moment and admitted, “This is our first show.” The audience cheered them on with support. At the end of their alternative and ambient electronic performance, Hull screamed, “Thank you Santa Barbara! I’ve always wanted to say that.” Their debut performance was a success and set the right mood for the night to come.

Seats began to fill up while people cheered on Las Cafeteras. They took the stage, huddled for a chant, took a brief selfie and settled into their positions. Filling the air with a vibrant fusion of folk music, Afro-Mexican music and spoken word, singer Denise Carlos danced her way to the microphone. Waving her gorgeous pinup dress back and forth and smiling at the crowd, Carlos said “It’s good to be home.” After seven weeks on a nationwide tour, the members of Las Cafeteras were glad to be back in California. Known for repping their hometown of East Los Angeles with community-focused political messages in their lyrics, their popular songs “El Chuchumbe,” “Ya Me Voy” and “La Bamba Rebelde” energized and inspired the audience. People threw fists in the air in agreement with the story-like lyrics about fighting for justice in Los Angeles.

With the same energy, the next group brought activist views, Latin, hip hop and rock music to the Santa Barbara Bowl. The lights dimmed down and Grammy-award-winning, multicultural band Ozomatli got everyone on their feet when lead singer Asdru Sierra yelled “levántate!” Everyone with a Budweiser in hand raised their glasses to the lyrics “dip, dive, socialize” in Ozomatli’s song “Saturday Night.” Other popular tracks like “After Party” encouraged the crowd to sway and enjoy the music together. The mix of hip hop, rock and Latin music kept SB Bowl pumped. Girls jumped on the shoulders of their friends, guys surfed the crowd for small moments and cups of beer flew through the air ever so often.

When I met up with couple Chris Zastrow and Michael Hillmen in the audience, Zastrow mentioned this was a pleasant birthday surprise. After 10 years of support, Hillmen made sure to cop these tickets for his birthday girl. Instead of celebrating Día de los Muertos on Los Angeles’ famous Olvera Street, the sweethearts came all the way from L.A. to see Ozomatli play. They were beyond excited to celebrate this holiday at Santa Barbara Bowl.

A little after Ozomatli left the floor, everyone’s phones read 8:30 p.m. Both the seats and the pit of the amphitheater quickly filled up. Raising the Mexican flag in support of the famous Latin alternative rock band, the crowd screamed wildly as Café Tacvba walked onstage. Lead singer Rubén Ortega strutted his way to the mic in shiny black boots with bright red laces. He let his long curly hair down and went all out as he sang Café Tacvba’s songs “Eres” and “Quiero ver.” Although the playlist was completely in Spanish, there was a common understanding of canto y baile, singing and dancing. The crowd ate up the mix of ska and funk and danced along all night. Even the volunteer ushers found themselves bobbing heads to the music every now and then. For more than an hour, Café Tacvba brought passion and energy to the amphitheater. Outrageous fans climbed onstage, dancing and taking selfies with the Café Tacvba band members.

The night didn’t seem to ever die down. In fact, several times the audience shouted “otro otro” asking for an encore. Of course, Café Tacvba couldn’t resist. The music of Café Tacvba in addition to Ozomatli, Las Cafeteras, Hy Brasil and DJ Carlos Niño brought about a sense of community. Even though the festivities were in remembrance of the dead, art and music brought the audience to celebrate life.