The Daily Nexus
Music
Young the Giant Plays Thunderdome in Diapers for Halloween Show
November 4, 2014 at 10:40 am by Mackenzie Hart 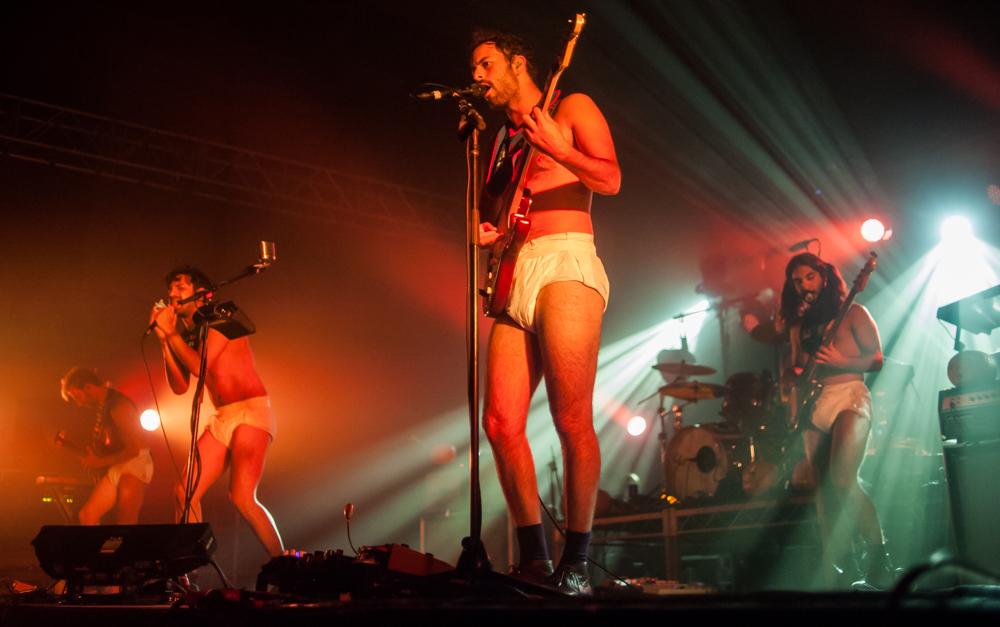 It was a dark and rainy night.

My pilgrimage to the “THUNDERDOOM” was a long and perilous one — I was almost trampled as I practically fought for a spot on the bus. So you can imagine how I felt when I finally arrived at the gloriously dry venue: soaked and frazzled, but excited nonetheless. I internally thanked the legendary partiers of Isla Vista, because if it weren’t for their past Halloween festivities, this five dollar concert brought by AS Program Board would not have happened.

Immersing myself in the crowd that huddled before the stage, I could already feel the anticipation hanging in the air. Finally, fifteen minutes after Young the Giant’s designated time of arrival, 10 p.m., a blonde-haired woman in a kimono and jeans finally stepped into the spotlight and was greeted by a gracious outpour of yelling and cheering. Soon enough, she was joined by a shaggy haired guy with a guitar. But this was not Young the Giant, contrary to what a surprising number of people thought. This was their opening act, a local band from Isla Vista named FMLYBND.

Charming the crowd with their chill California sound, FMLYBND easily won the crowd’s love despite some equipment faultiness in the beginning of their set. “Who here likes Joy Division?” they asked before letting loose a guitar-fueled cover of “Love Will Tear Us Apart.” “Where is my Mind?” by The Pixies and an original song, “Young Wild,” were also performed with a contagious energy, and as lights flashed on stage, the crowd swayed and sang along.

FMLYBND’s performance successfully charged the crowd with energy for the big event: Young the Giant. Cellphone cameras were prepared, weed was lit and condom balloons were blown and tossed around. Then, finally, it happened: a woman dressed in a French maid costume walked into the purple lights on stage, gingerly dusted equipment and signaled Young the Giant’s impending arrival.

One may have imagined the band originating from Irvine to arrive dressed in outfits any other indie rock band would have worn: cool graphic tees and jeans perhaps. But Young the Giant defied expectations. Staying true to the Halloween season, the quintet graced the stage in puffy adult diapers and bibs.

“I think we take the cake for the sluttiest costume,” frontman Sameer Gadhia joked with the crowd. Later, he brought up the diaper attire once more and said, “We played at UCSB before in Storke Plaza and I think we’ve played at a frat party. Who knew that the next time, we would play in diapers?”

Indeed, their wardrobe stunned the crowd, but not as much as their energetic rendition of “Anagram” from their new album Mind over Matter which kicked off their set. “It’s About Time” followed with fiery guitar riffs, lots of stage pacing and dazzling lights that framed the stage with a dreamy flurry of colors. But it was not until halfway through the set that they gave the crowd the number one song that we were all waiting for, the breakout hit that landed them on the map: “Cough Syrup.”

When the first chords of “Cough Syrup” sounded, a unified, exalted yell filled the Thunderdome and the crowd exuberantly sang along and fist pumped like there was no tomorrow. This launched more throwbacks from their self-titled debut album: beach vibe-y, guitar-centered “Strings” and “Apartment.”

After a painfully brief farewell and “thank you,” Young the Giant walked off stage only to be followed by a raucous demand for an encore. Right after a unified, “Olé, olé, olé! Gauchos, Gauchos!” the indie rockers delivered and ran back on stage to perform a groovy cover of “Ignition” by R. Kelly. Singing into an old fashioned microphone, Gadhia delivered swagger. Their title track “Mind Over Matter” concluded the set.

Still clad in their bibs and adult diapers (I think Gadhia even said something about the diapers allowing a lot of “gooch space”), Young the Giant said their thanks and a single bib was tossed into the crowd. To the kid that caught the bib, I envy you. To Young the Giant, thank you for the wonderful substitute to a rainy night in I.V. 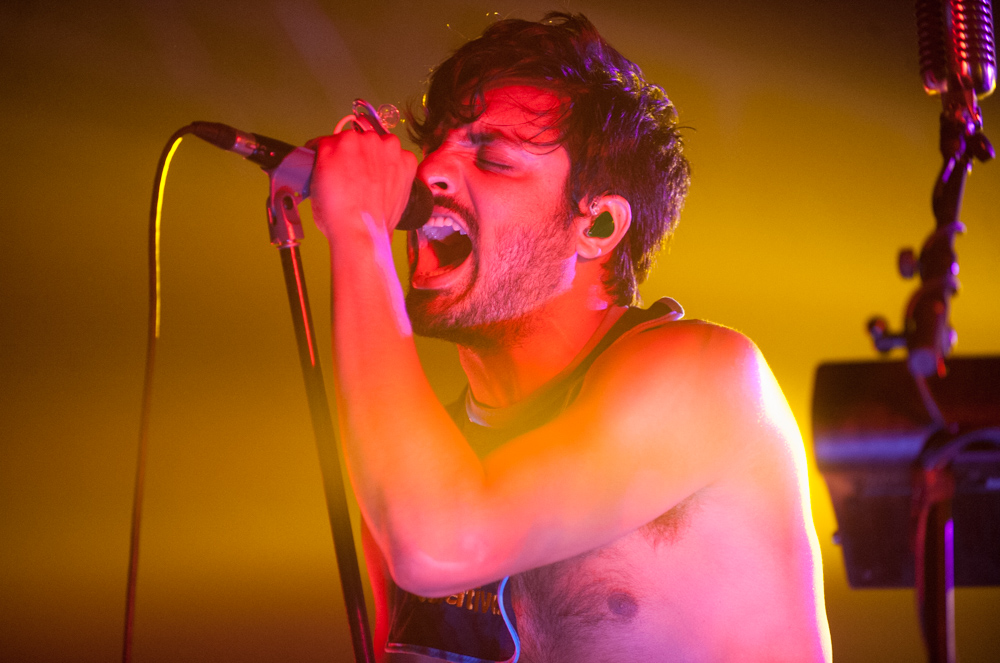 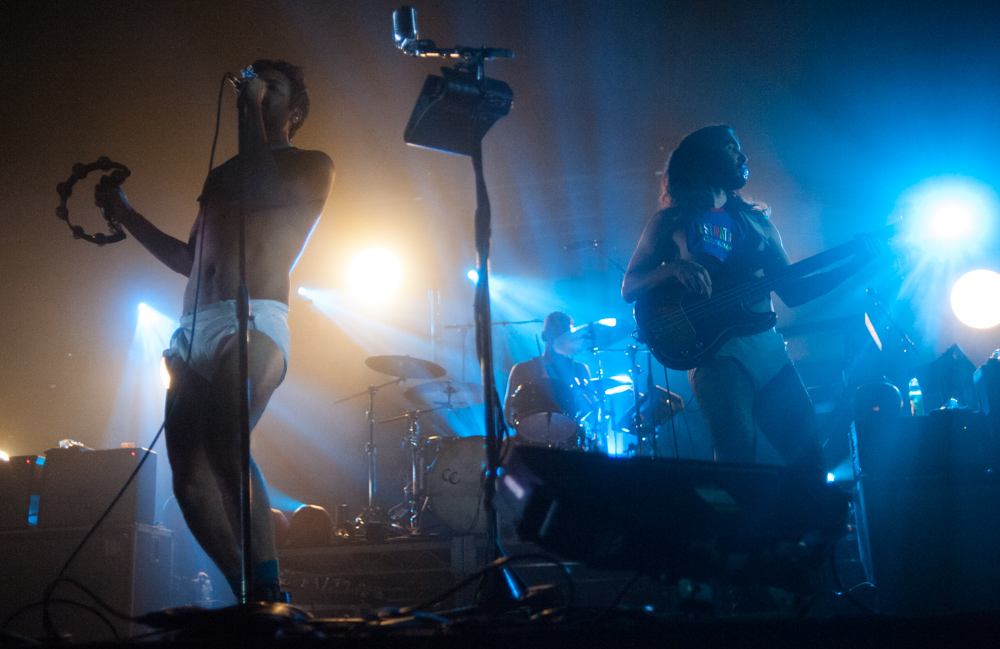 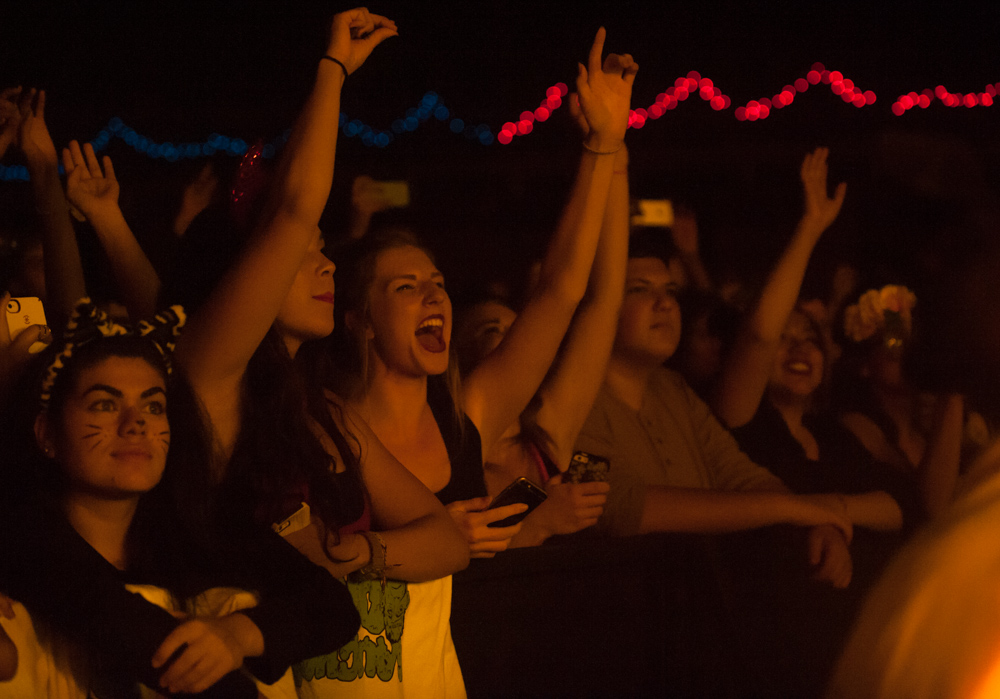 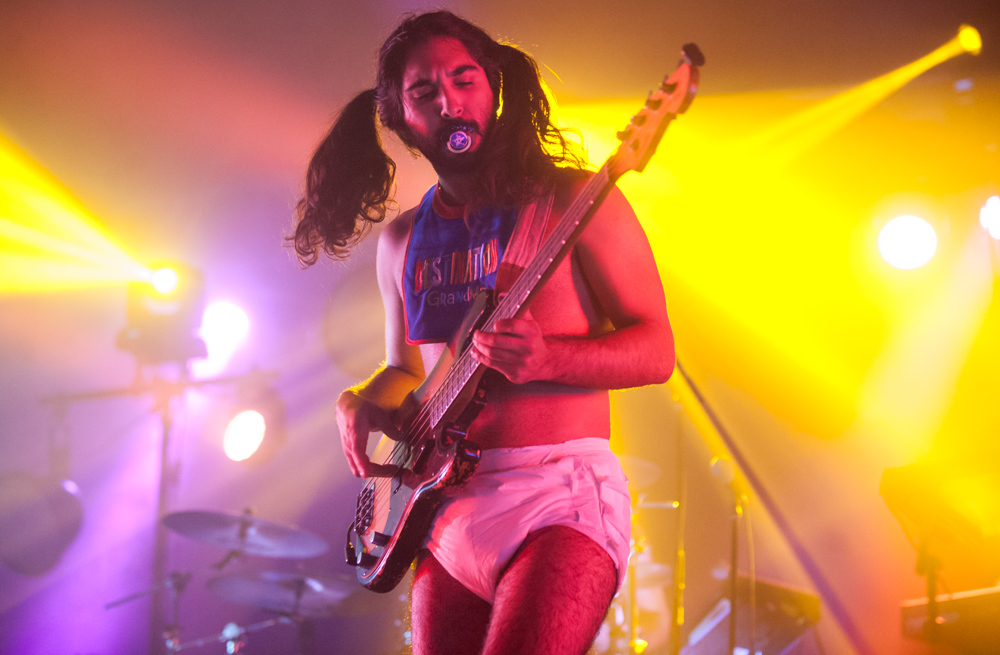