The Daily Nexus
Sports Blogs
Warriors First Look: Klay Thompson Gets the Max
November 4, 2014 at 5:00 am by Edward Moss 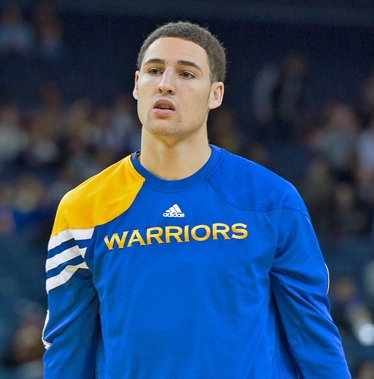 The Golden State Warriors made an excellent decision when they signed shooting guard Klay Thompson to a maximum contract extension on Friday. Keeping Thompson for the long term gives the Warriors an opportunity to join the NBA’s elite in the coming years.

After a summer of dabbling with the idea of trading for Kevin Love, but staying firm on not giving up Thompson in an offer, the Warriors signed Thompson to a four-year maximum contract extension worth about 70 million dollars. The contract will keep him with the team through the 2018-19 season.

The decision to sign Thompson now is a very smart one by the Warriors’ front office, as it would be much harder to keep him if he finished the season and became a restricted free agent. We saw what could happen if that were to occur with former Houston Rockets’ power forward Chandler Parsons as he left the team for the Dallas Mavericks after they offered him more money and after point guard James Harden called Parsons only a “role player.”

By extending Thompson’s contract, the Warriors will keep the former 11th overall pick in the 2011 NBA draft in the same backcourt with fellow “Splash Brother” Steph Curry, who the Warriors signed to a 44 million dollar, four-year extension on Oct. 31, 2012. Curry started his first All-Star team last season and together the “Splash Brothers” have led the team to two straight postseason berths, with last year’s season ending after a first round loss to the Los Angeles Clippers in seven games.

The Warriors are 3-0 to begin the season and are No. 2 on ESPN’s Power Rankings. Thompson leads the NBA with 29.7 points per game while adding 2.7 rebounds and 3.0 assists. On Saturday, his first game after signing his new contract, he scored 41 points against the Los Angeles Lakers in a 127-104 victory before coming back the next night with 29 points in a 95-90 win over the Portland Trail Blazers. Warriors’ fans will hope he can keep up the pace for the entire season and lead the team deeper into the playoffs.

The Warriors have a pretty solid team with Thompson and Curry playing in the backcourt and Andre Iguodala, David Lee and Andrew Bogut making up the rest of the starting five. The Warriors begin the season with Lee injured, but hope to have him back in the lineup soon. Draymond Green and Harrison Barnes will be the top two men off the bench to make up a very respectable top seven that can compete with most teams in the league.

The Warriors are close to a championship-caliber team with Thompson and Curry in their backcourt. Before being able to compete with a Kevin Durant-led Oklahoma City Thunder and San Antonio Spurs, Golden State will need to add another high-caliber player to its squad. Bogut, Lee, and Iguodala are all good players, but the Warriors need another star in their lineup to solidify the frontcourt. After a great move in signing Thompson, I’m excited to see what team management does to improve this team in the near future.