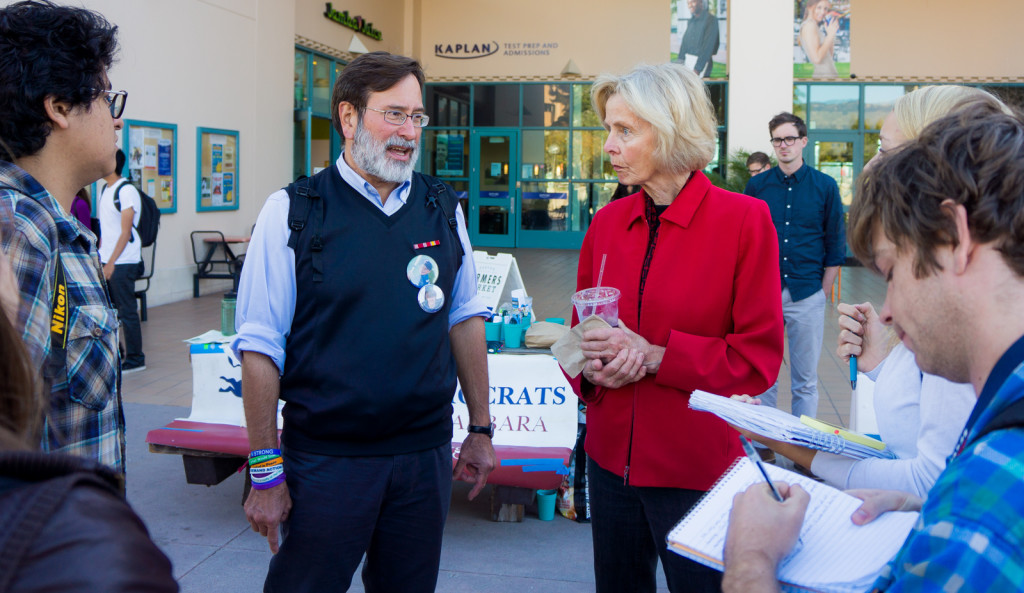 Congresswoman Lois Capps and Richard Martinez, the father of UCSB student Christopher Michael-Martinez who died in the Isla Vista mass murder this past May, visited campus and walked along the streets of I.V. yesterday to speak with students and to urge them to vote in today’s election.

Capps and Martinez tabled outside the UCen yesterday afternoon and informally took questions from reporters and students before heading out into I.V. to go door-to-door. During the tabling, they discussed proposed gun safety laws including a bill called the Pause for Safety Act, authored by California Senator Barbara Boxer.

While the current California ballot does not include bills that pertain to gun safety, Congresswoman Capps said all undecided or apathetic voters can help move forward two gun safety bills that have been proposed.

Capps said she supports Minnesota Senator Amy Klobuchar’s Protecting Domestic Violence and Stalking Victims Act and Boxer’s Pause for Safety Act, both of which were proposed in Congress earlier this year.

The Protecting Domestic Violence and Stalking Victims Act would close certain loopholes in the current legislation protecting victims of stalking and domestic abuse from gun violence. One revision is the inclusion of “dating partners” under the definition of “intimate partners,” allowing victims to seek protection from domestic violence and stalking.

The Pause for Gun Safety Act would allow friends or family members to seek a temporary “gun violence prevention order” if they fear that someone close to them is posing a threat to themselves or others. The gun violence prevention order would effectively prohibit, for a brief period, a given individual from purchasing or possessing a firearm and grant authorities permission to confiscate firearms already in possession.

According to Capps, voting certain candidates into office, such as herself, will allow for changes in legislation to happen.

“I’ve supported legislation ever since I got there; the relationship between gun violence and domestic violence, safety issues and now in this case, allowing a parent or someone else in a position of recognizing someone might be a danger to themselves or others, to intervene in time for the guns to be confiscated,” Capps said.

Since the events of May 23, Martinez said he has toured the country, visiting 11 states as well as Washington D.C. in a campaign to change state legislation regarding gun safety.

According to Martinez, solving gun violence issues requires more than one answer.

“There’s no one solution to gun violence; it’s a multifaceted problem,” Martinez said, “There isn’t one solution to this kind of thing. You make changes that incrementally solve the issue.”

Martinez said voting is a response that is one potential solution to gun violence.

According to Capps, gun control is not the only pressing issue in this “critical” election.

“I’ve always been a champion for making college more affordable,” Capps said. “We want to make sure that we protect the environment, that we put people to work in projects that will bring our economy forward, take advantage of alternative energy other than fossil fuels. There’s protecting Medicare and social security. There’s all kinds of issues at stake in this election.”

Later in the evening, Capps went door-to-door in I.V. to ask community members to vote the next day. This morning, she was up at 5:00 a.m. to hang pamphlets on the doorknobs of the residences in I.V. to remind voters to turn in ballots.

“There’s not a lot of excitement in this election, so they forget about the ballot, it’s still sitting on top of the refrigerator, and then they say ‘Oh my gosh, I have this ballot here!’ Well they can take it to any polling place,” Capps said, “And there’s several of them around Isla Vista and UCSB.”