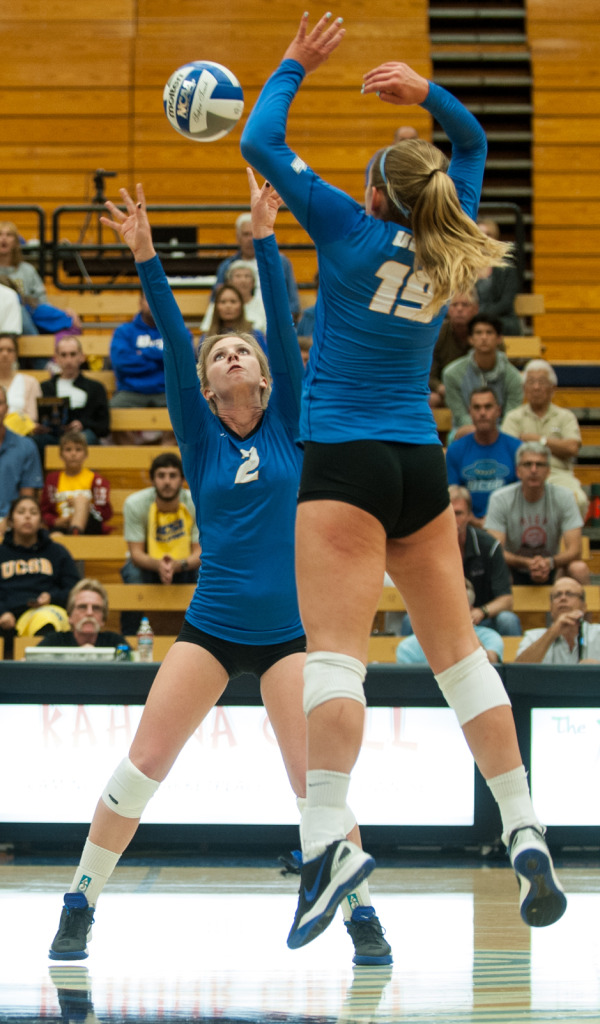 The UCSB women’s volleyball team faced UC Davis and UC Riverside for the second time this season and came out with a 3-2 loss to the Aggies on Friday and a 3-0 win over the Highlanders Saturday.

The Gauchos maintained their .500 record, advancing their record to 5-5 in the Big West and 10-11 overall, landing the team the sixth spot in the conference.

After a 2-0 weekend for the Aggies, Davis now puts up a 7-3 Big West record and 12-11 overall record, placing the team at third. The Highlanders are yet to find their first win after a pair of losses this weekend put them last in the division with a 0-10 Big West and 2-20 overall record.

“We fought really hard and loosing in five is always tough, because those are the game that are really fun to win,” sophomore outside hitter Ali Spindt said. “It pumped us up to take it out on Riverside the next day.”

The Gaucho defense held the Highlanders to a .113 average hitting percentage and 41 points. UCSB also hit 11 serve aces in its second win over Riverside this season.

“We served great [on Saturday] and we really gave them some problems being aggressive from behind the service line,” Head Coach Nicole Lantagne Welch said. “We caused some issues with their passing and we had enough of a balance offensively as well.”

Big hitters for the Gauchos on Saturday were junior outside hitter Ali Barbeau and freshman outside hitter Chanel Hoffman. Barbeau swung for a .318 hitting percentage with nine kills over 22 total attempts and 11 points. Hoffman also scored 11 points and had seven kills.

Offensive leader for the Highlanders was sophomore outside hitter Bri Holmes who hit for a .129 hitting percentage with 12 kills and 12.5 points, while also putting up three block assists.

“We were just hungry for a win,” Barbeau said. “We wanted to give it our all, and we didn’t want to come away from the weekend disappointed that we didn’t go 100 percent.”

The Gauchos trip to Davis ended in a 3-2 loss in the five-set match. UCSB came out strong to take the first set 25-20, but fell 25-14 and 25-21 in the second and third sets, respectively. The Gauchos came back in the fourth set 25-21 forcing a fifth set, which ultimately ended in an Aggie home-court victory of 15-10. The match marked the second loss the Gauchos have recorded against Davis.

“We didn’t come out to play as well in the fifth game, and that can be anyone’s game,” junior libero Shauna Klein said. “They beat us out and their hitters were on it.”

An evenly matched series between the teams made for a high-energy game. Both teams hit for an average above .250, racked in 62 total kills, and over 150 total attempts.

Defensively, Spindt had 20 digs and is now ranked second in Big West for digs per set with 4.41. She is also ranked fifth in total digs with 313.

“The loss was tough, but we put ourselves in a good position when we fought hard to come back and win the fourth set. Anything can happen in the fifth set,” Lantagne Welch said. “When we stuck to the gam plan we were effective, but unfortunately we didn’t do that some key times probably early in the match.”

For the Aggies, junior outside hitter/middle blocker Kaylin Squyres swung for 24 kills and a .286 hitting percentage scoring 27.5 points in addition to recording 11 of the teams 59 digs. Following Squyres, was sophomore outside hitter Allie Wegener who had 12 kills, four serve aces and 11 digs to score 17 points.

The Gauchos return home on Saturday to face Cal State Fullerton on Friday and UC Irvine.