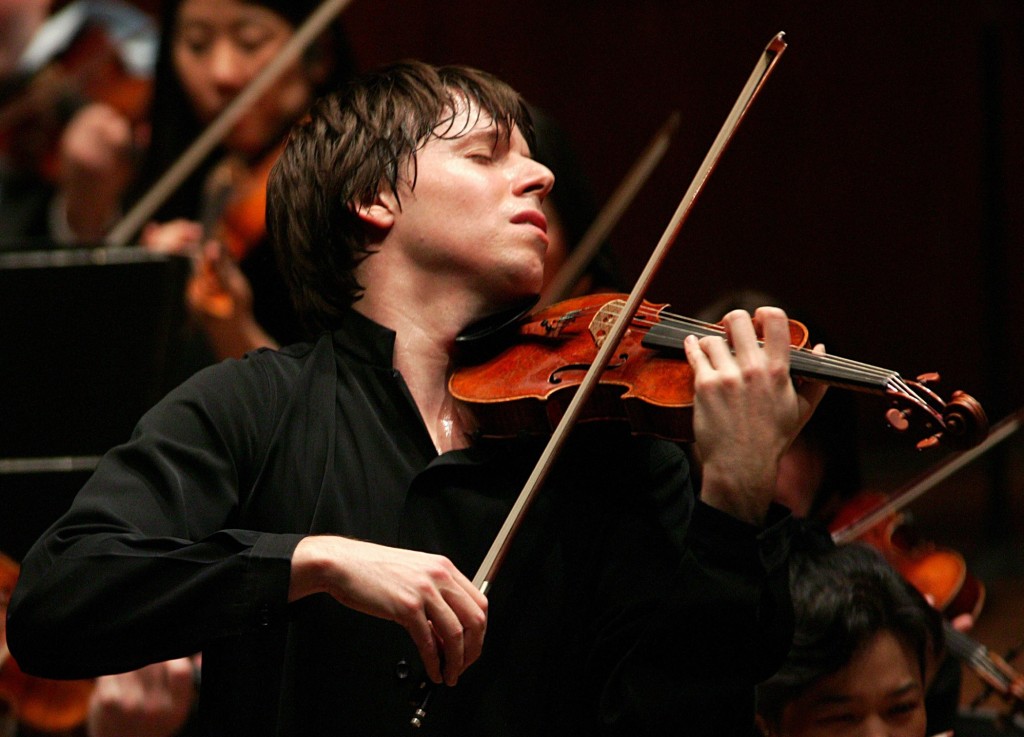 At age 17, Bell made his debut at Carnegie Hall with the St. Louis Symphony, and continued to perform with and conduct many major orchestras. At 18, Bell had his first recording with classical music label Decca. Since then, he has recorded more than 40 CDs as an exclusive Sony Classical artist. Additional recordings that led the prodigy to international fame include the soundtrack for the films Angels and Demons and The Red Violin.

As part of a 2007 Washington Post story examining context and art, Bell performed incognito in a subway station, and the story won the Pulitzer Prize for best feature writing of the year. Although already boasting a remarkable reputation in the music industry, Grammy-award winning Bell sustained his prestige that evening in L’Enfant Plaza subway station as one of the best violinists in the world.

Bell began Tuesday night’s show with Franz Schubert’s “Sonata for Violin and Piano in A Major”, also known as “Duo.” Composed of four movements, “Duo” was stylistically divided into five themes, ranging from subdued and wistful to athletic and upbeat. The virtuoso conveyed Schubert’s intentions with exaggerated movements and facial expressions. He whipped his hair and crouched, leaning towards Bax as if in conversation. Even without knowing the sound of Bell’s voice for the majority of the night, audience members engaged emotionally with the violinist through the drama.

An audience-favorite of the night came next: Edvard Grieg’s “Sonata for Violin and Piano” in F Major, Op. 8. A violinist and violist himself, second-year UCSB student Evan Davies was among those who favored the second selection of the evening. “I liked [Grieg’s sonata] because it was showier; there was more character to it. Overall, it was more of a flashy, entertaining piece,” Davies said. The sonata was divided into the traditional three movements, the third of which gradually drove up in fiery excitement.

Moving towards a somber close, Sergei Prokofiev’s “Sonata for Violin and Piano” in F Minor, Op. 80 was the third selection of the night. Following the intense sonata were two surprise selections: Sergei Rachmaninoff’s “Vocalise,” Op. 34, No.14, which is part of Bell’s album “Voice of the Violin” and Juilliard-graduate Sarah Chang’s “Introduction and Tarantella,” Op. 43. Bell dedicated “Vocalise” and “Introduction and Tarantella” to his violin teacher, as Tuesday would’ve been the mentor’s 105th birthday.

People of all ages – musician or not – took inspiration from the violinist. Children were especially astonished by Bell’s animated movements and unrelenting passion. Eight-year-old amateur violinist Vincent Le said of Bell, “Joshua is different because he moves a lot more than other violinists I’ve seen. Also, my favorite song was Grieg’s piece.”

Anne Sales, a representative of the older age group, caught up with me after the show and delivered insight on her feelings towards the performance. “One word: stellar. Every time he takes a deep breath between pauses, it’s complete silence in the room,” Sales said. “Why? Everybody’s just mesmerized. I still have goose bumps.”

Joshua Bell enchanted audiences young and old that evening in Granada with his song. Yes, his vocal song, because as Bell famously quotes, “The violin sings.”

Because “pianista” is accompaniment. Bell is the main act!

Many thanks for the great short article, I was looking for specifics such as this, visiting look at the other posts.