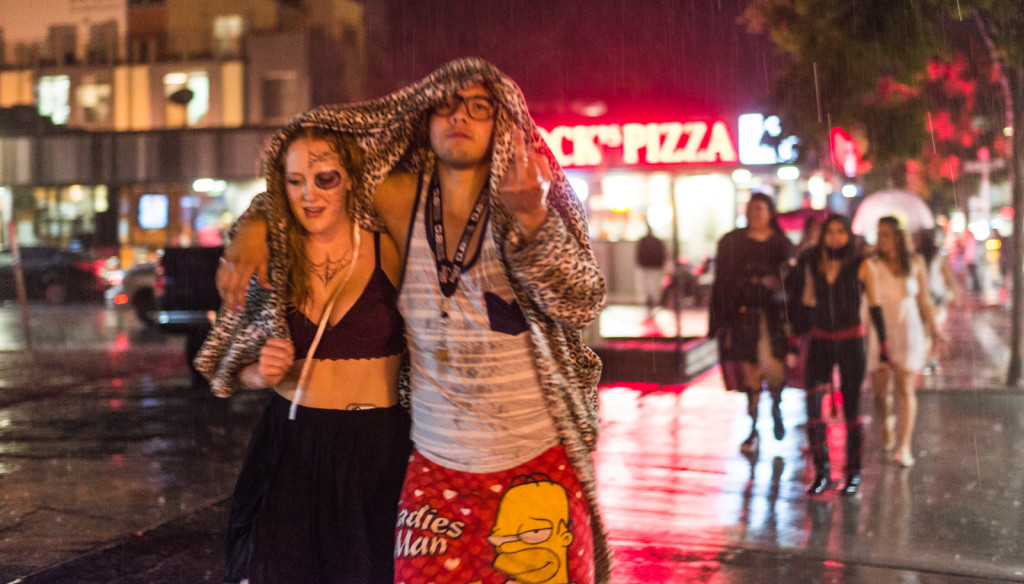 The rain may have kept out-of-towners away, but didn’t dampen the spirits of I.V. residents. William Zhou/Daily Nexus

There were no major incidents in Isla Vista this past Halloween weekend and arrests and citations were down significantly compared to last year’s Halloween attendance, according to a statement from the Santa Barbara County Sherriff’s Department.

According to the statement the crowd amounted to a few thousand people, mostly locals, and while official numbers are not yet available, the department said there were less than 40 jail bookings and citations for the entire weekend, compared to over 200 jail bookings and 250 citations on Halloween weekend last year.

The decreased number of infractions and reduced number of Halloween weekend attendees was attributed to efforts by the university and I.V. residents to discourage out-of-towners from coming to I.V., a large law enforcement prescene in the area, an on-campus concert at the Thunderdome, alternative activities for students and lastly the heavy rain Friday night, according to the statement.

The statement thanked UCSB and SBCC for good behavior and specifically thanked the “Isla Vista Safe” coalition, which is sponsored by the Santa Barbara County District Attorney’s Office, and all of the first responders in I.V. this weekend.

The department said the total cost of Halloween this year will not be available for several weeks, but because so many first responders were released from duty early due to the small crowd, the cost will be lower than previously estimated.