After a weekend of quality performances throughout downtown Santa Barbara, this year’s New Noise Conference and Music Festival culminated in the Block Party on Sunday in the fittingly trendy Funk Zone area. The term “block party” can be interpreted quite literally here, seeing as the party occupied only about one block’s worth of space. Although small in size, the mini-fest — which had Ghost Beach, FMLYBND, Pains of Being Pure at Heart, Gibbz and Cherub on the bill — had a lot to offer its attendees. 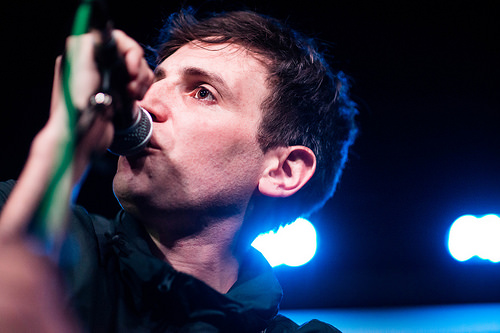 The Pains of Being Pure at Heart, Courtesy of blog.kexp.org

From vendors with unique artisan wears to a beer garden with the option to do a “silent disco,” there was no shortage of entertainment between the artists’ sets. The line of vendors was diverse enough to provide something for everyone. There were a few merchandise stands selling crystal gem jewelry and feathery headbands, while Lucidity had a booth for those looking to buy some true bohemian garb.

Because of Hope, a nonprofit that raises money for Uganda by selling their handmade goods, had a stand and, while they refrained from solicitation (thank god), they were on hand to educate passers-by about their mission. Art from Scrap, a local organization that keeps reusable art materials donated from resident businesses, provided a station where people could stop and make themselves a headband or bracelet for free.

Adjacent to the vendors there was a small food court with a seated area set against the backdrop of live mural paintings. Inspired by a girl painting a sea creature on what appeared to be a large dumpster, a few other artists started to set up shop and paint away for all to politely observe. Past the artisan popsicle stand and a wood-fired pizza oven, there lay the quintessential taco truck with three tacos for $5, making the meager food selection A-okay in my humble opinion.

Between the live mural paintings, silent disco and local art vendors, the New Noise Block Party held strong elements of DIY, and the atmosphere was largely created by the attendees. People did not simply show up to see Cherub (okay, maybe some did), but also to interact within the community and truly see what the Santa Barbara art world has to offer.

The harmonious nature of the mini-fest manifested itself when Kip, lead singer of rock-pop band The Pains of Being Pure at Heart, amicably handed me a free CD when I mentioned that I would unfortunately be missing their set. The sense of community reminded me that the Block Party was just as much about the local artists and networking in Santa Barbara as it was about the performances themselves. Although sometimes overshadowed by the bar scene, downtown Santa Barbara has a very conscious artistic community. New Noise Conference and Music Festival perfectly embodied this realm. The Block Party seamlessly concluded a weekend of music, education, networking and just plain ol’ good times.