The Daily Nexus
Volleyball
Santa Barbara Aims at Climbing Back Into Big West Contention
October 30, 2014 at 4:58 am by Sarah Stigers 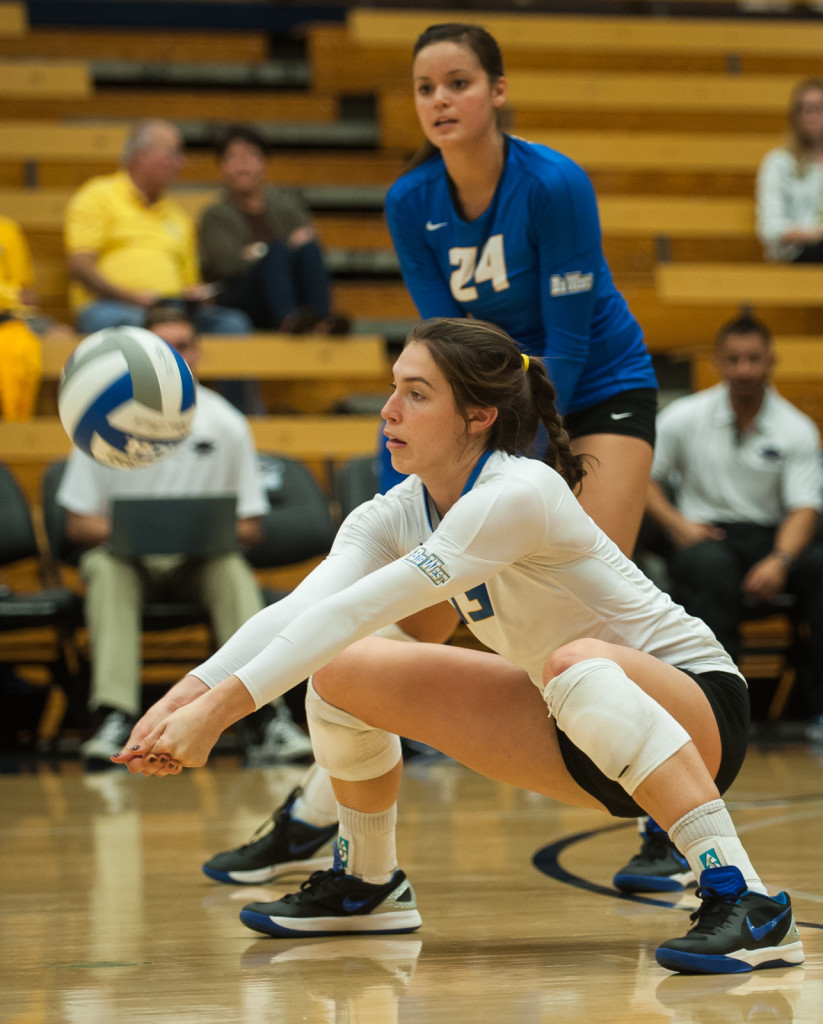 Ali Spindt receives serve during a match against CSU Northridge on October 18, 2014. The Gauchos swept the Matadors during that match. Kenneth Song/Daily Nexus

The UCSB women’s volleyball team stays on the road for the second weekend in a row as it travels for a rematch against UC Davis on Friday, followed by UC Riverside on Saturday.

“I expect us to play some inspired volleyball,” Head Coach Nicole Lantagne Welch said. “We didn’t play our best the first time we played Davis, so it’s a great opportunity to come in and show them what we have.”

The Gauchos fell to the Aggies the last time the two teams played in early October, but things have changed since the season has progressed. UCSB is now hitting more kills per set than the Aggies in addition to maintaining a .193 to Davis’ .181 average hitting percentage. The Gauchos have also recorded the second least amount of errors in the division, while Davis has the third most errors among Big West teams.

A top hitter for the Aggies continues to be outside hitter/middle blocker Kaylin Squyres. The junior is second in the league in both kills per set and total kills, averaging 3.96 per set and recording 313 overall.

Defensively, the Aggies’ senior middle blocker Katie Quinn also finds herself on the division leaderboard, ranking third in blocks per set with an average of 1.20.

For the Gauchos, sophomore middle blocker Phoebe Grunt continues to be a division leader in hitting percentage, converting .333 of her attempts. Spindt also continues to lead to league in digs per set, averaging 4.51.

“I think we will be more prepared this time for Davis, we’ve had a few hard fought matches since then,” junior outside hitter Ali Barbeau said. “I think we’re more prepared to tough it out, and stay in and be aggressive.”

Bringing up the rear of the league this season are the Aggies, who currently hold the last place spot.

Though it has not seemed to translate into wins, the Highlanders are currently shooting for 2,715 total attempts so far this season, putting them in the middle of the pack at fifth in the division.

“So much about this time of year is just executing the game plan and being consistent, and I think we’ll be able to handle that,” Lantagne Welch said.

The Gauchos play Davis Friday and UCR on Saturday. Both games start at 7 p.m.

A version of this article appeared on page 12 of October 30, 2014’s print edition of the Daily Nexus.