The Daily Nexus
Sports
OT Win Gives UCSB Momentum Ahead of Cal Poly Rematch
October 30, 2014 at 5:04 am by Michael Jorgenson 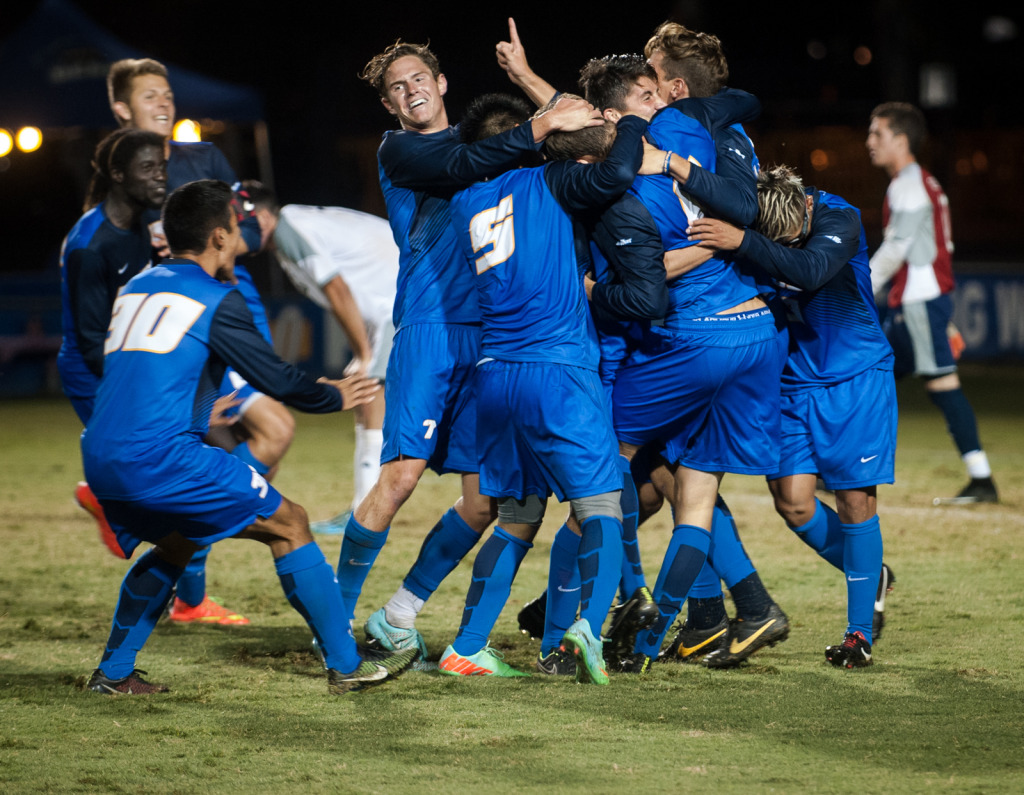 In last night’s battle for first place in the Big West North Division, the UCSB men’s soccer team came out on top thanks to yet another last-second goal by sophomore forward Nick DePuy, defeating UC Davis in overtime 1-0.

“We knew that Davis leads the country in ties for a reason. They came down here with one thing in mind and that was to not give up a goal,” Head Coach Tim Vom Steeg said. “We don’t shy away from the fact that we had to win tonight, so credit to the guys to stay after it, not lose focus and obviously being rewarded with a goal.”

Coming into the game, UCSB knew that it would have an extremely difficult time trying to break down the number one defense in the Big West. Although the Gauchos dominated possession for most of the first half though, they went into halftime scoreless, outshooting Davis a measly 3-2.

“I thought that we did okay in the first half,” Vom Steeg said. “But when you look at the scoreboard, for all that possession we only had three shots, and so we had to absolutely change and push and fight.” 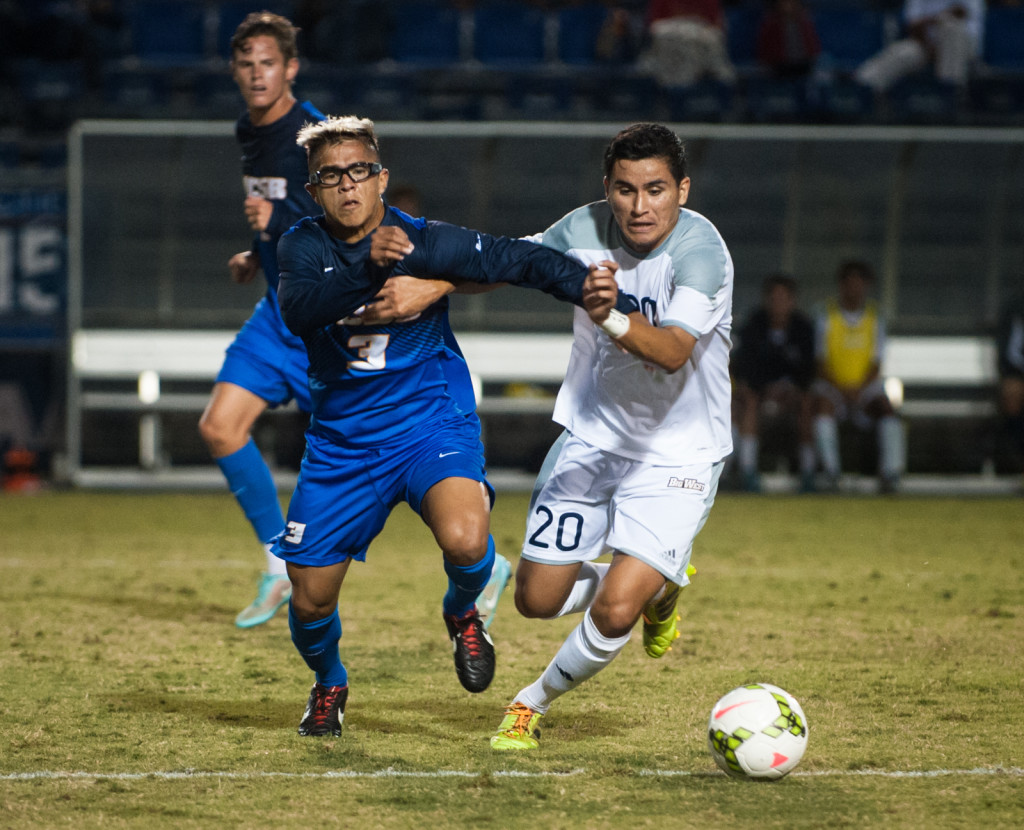 The second half saw a different UCSB method of attack, as the Gauchos pushed men forward in search of a winning goal. UCSB ended the game outshooting Davis 19-4, but a familiar story seemed to be unfolding for the Aggies as they maintained the shutout for the full 90 minutes.

UCSB had three great chances to score in the final three minutes of regulation, with shots by freshman midfielder Ryo Fujii and DePuy forcing Davis’s sophomore goalkeeper Armando Quezada to make a pair of excellent saves.

“Earlier in the year, we’d have been the kind of team that got frustrated, went away from the gameplan, and maybe lost our focus,” Vom Steeg said. “Tonight, we didn’t do any of that. I feel like the team’s really grown up during the year.”

In the 99th minute, UCSB found itself on yet another counter as it pushed a majority of the team forward. Sophomore midfielder Drew Murphy started things by sending a beautiful switch ball down the field to Fujii, who skillfully brought it down before leading an overlapping sophomore midfielder Ismaila Jome down the wing.

“It was a great sequence,” Vom Steeg said. “It was the one time all night that we actually caught them without nine guys behind the ball.”

As he has done all season, Jome sent in a cross that rolled across the face of goal to find DePuy for a first-time shot. The powerful strike snuck just under the crossbar and over the head of Quezada, giving the Gauchos the 1-0 win and DePuy his fourth game-winning goal of the season.

“I saw an opening on the back post and I thought if Ish can roll the ball across the six I might score this, and that’s what he did,” DePuy said. “The only thing you can do is keep going and keep creating opportunities and that’s what I did. It was a great ball and a great finish.” 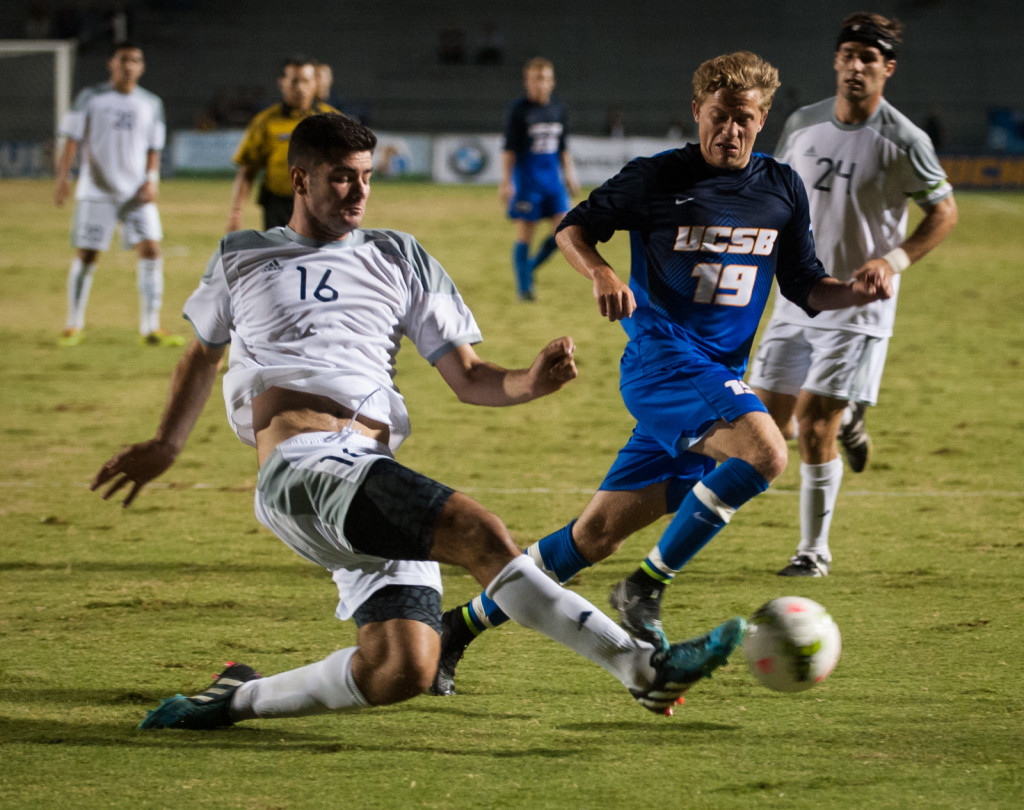 Despite constantly looking for the counter, UCSB’s backline performed admirably all night, giving up zero shots on goal for the entire game.

“We were very consistent in the back,” Vom Steeg said. “The key for us was that we didn’t lose our shape, we didn’t start freaking out. We stepped up our pressure and our center backs played excellent.”

DePuy, who has led his team in scoring for most of the season, has now tallied six goals and 48 shots, both good for fifth in the Big West. The assist by Jome was his fifth of the year, putting him in a four-way tie for first in the conference.

The Gauchos’ next game will be against a Cal Poly team that was just upset last night by Sacramento State, putting the Mustangs’ postseason chances in jeopardy.

The game will be played at 5:00 p.m. this Sunday at Alex G. Spanos Stadium.