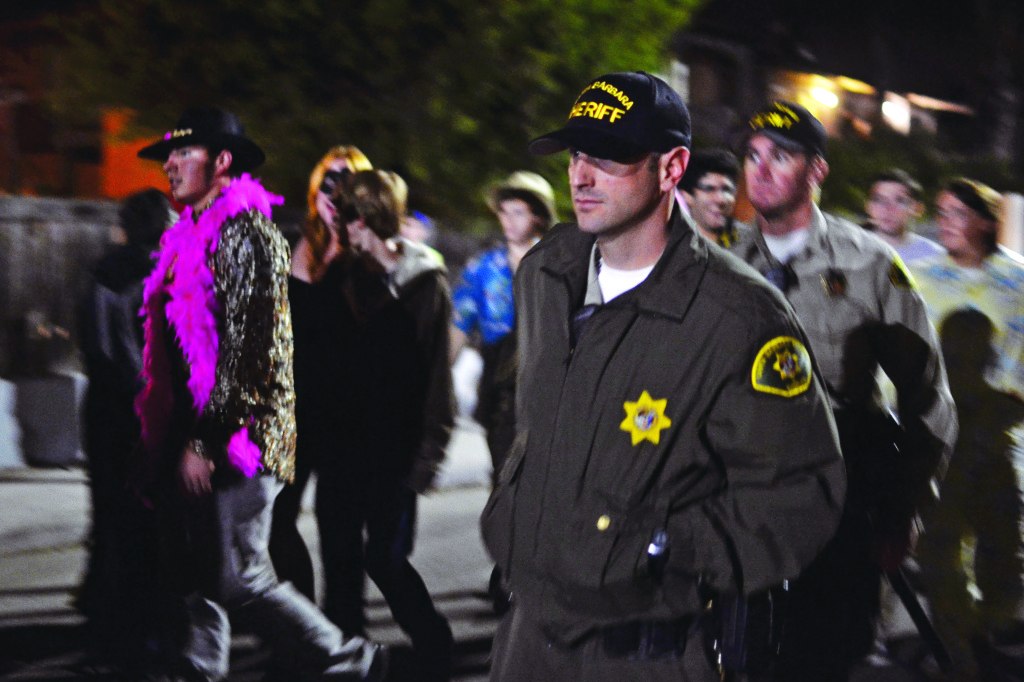 Over the weekend, UC Santa Barbara Police Department and the Santa Barbara County Sheriff’s Office will be enforcing extensive regulations, some not regularly enforced, and will increase the regular number of officers on patrol in Isla Vista.

According to the festival ordinance, which started last Saturday and lasts through next Monday, music must not be heard outside an apartment or house from 6 p.m. to 7 a.m., and temporary paper permits will not be honored this year, meaning vehicles must display either an annual campus parking pass, faculty or staff passes, or authorized special event permits to get past all check points on campus. No taxis will be allowed to pick up or drop off on campus, but there will be an emergency first aid tent for the public located at Embarcadero Loop on throughout the weekend.

A Search and Rescue unit will be set up at Camino Pescadero and Trigo Rd. to respond to emergency first aid needs. If law enforcement determines that I.V. has become unsafe for the public, roads will be closed by the county and proof of residence will be required for vehicle entry.

“The City of Goleta has also posed new parking restrictions,” Hoover said. “From South of Hollister Avenue between Canon Green to Storke Road is permit parking for residents only.”

Hoover said the reasoning for a bolstered force this year is to ensure student safety.

“Halloween in Isla Vista is an unsanctioned event that can be dangerous.  There are alcohol poisonings, sexual assaults, fights, potential cliff falls and other things that can happen,” Hoover said. “The law enforcement present is there to stop problems before they start, keep the peace and protect life and property.”
UCPD’s Sergeant Robert Romero said that the increased number of officers doesn’t mean increased action by law enforcement but rather the large presence has been called in “in case something does happen.”

“The goal is not to ruin anyone’s good time. The goal is to keep it safe, to keep it local, and sobriety is the key too,” Romero said. “Over 90 percent of everything that happens out in Isla Vista, especially during Halloween, is alcohol and/or drug related. We just want people to be responsible.”
Romero said keeping I.V. safe during Halloween is up to law enforcement, as well as students and the community.

“What we do is a band aid but what the UCSB and city college students can do is make a real change,” Romero said. “We’ve been asking for the community’s help around the areas like the K-Mart shopping center, the Costco shopping center, big parking areas where people can park and walk into Isla Vista, to help out with making their lots customer parking only.”

Romero said that the department has been actively taking to social media to get the word out about Halloween.

“We’re also doing a big social media push to the students around here about keeping a safe and local event,” Romero said. “Don’t invite your friends to come. It’s not a good time to invite out of town friends that may not care about this place like you or I do.”

Third-year sociology major Joel Gamino said he is in favor of keeping Halloween as local as possible.

“I’m a huge supporter of keeping Halloween local this year as I think that out-of-towners are the true ones that cause most of the problems and bring a bad image to UCSB,” Gamino said.

Second-year physics major Josh Barney agreed and said he would like to celebrate Halloween among fellow I.V. residents, not individuals unfamiliar with I.V. safety etiquette.

“I like to party and celebrate as much as any other student, but I think the influx of out-of-towners makes this a dangerous scene for both safety and the image of the university,” Barney said.

“I understand we have a good celebration here, but so does every other college across the country, so I think that solely UCSB students should enjoy the tradition,” Nierenberg said. “Also look at the monetary side,” he added. “It costs the school and city tons of money for the extra protection provided, such as police and local hospital visits.”

Romero said the majority of officers being brought in from other UC campuses or Ventura County have been called to I.V. before to help with past events, and have been trained to stop violations like any other officers.

“We’re a customer service oriented police department. Therefore, if people have questions, they need help, they’re lost, anything like that, we’re not just there in an enforcement capacity. We’re there to be visible,” Romero said. “It’s not strictly an enforcement action.”

Romero also said that since the Deltopia riots, the Sheriff’s Department has undergone a great deal of training to make sure their deputies and staff are prepared should anything similar happen. This year there will be a special-trained rapid-response team on standby on campus.

According to Hoover, maintaining a safe and local Halloween is essential to protecting both UCSB and Santa Barbara City College’s prestigious reputations.

“We hope everyone will have respect for themselves, for law enforcement and pride in their community of Isla Vista,” Hoover said. “We had a tough year last year with a lot of tragic incidents, we hope everyone can pull together and have a safe and local Halloween.”