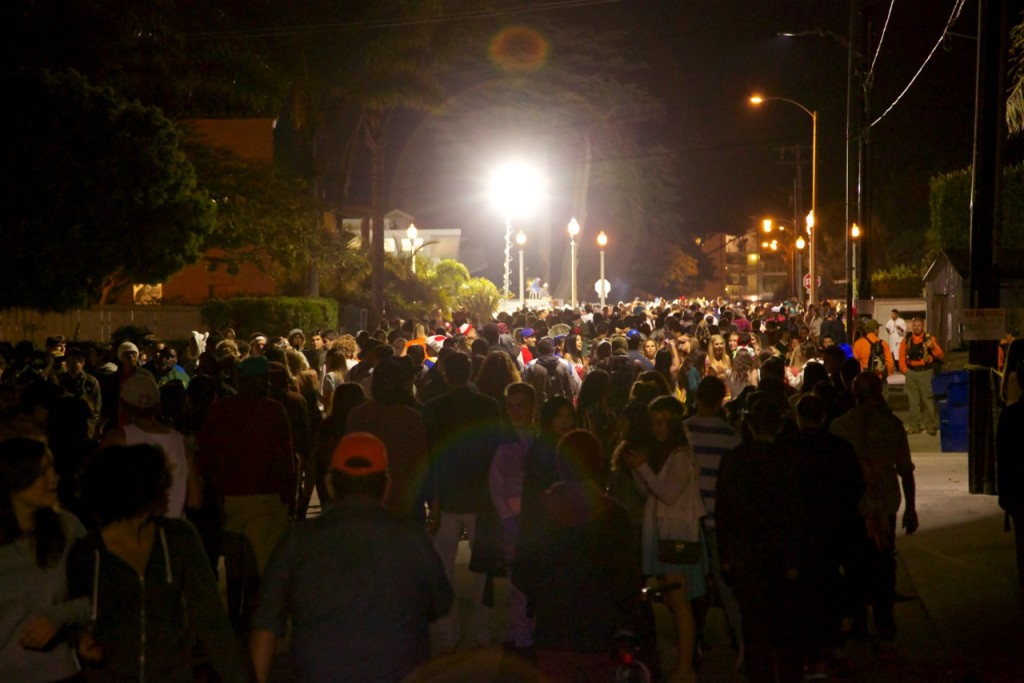 Examining Halloween’s recent evolution in Isla Vista, suspicion and uneasiness towards authority paired with extensive rules and restrictions and constraint have led to rising contentions between police and civilians, a common pattern for Isla Vista.

In the 1980s and early 1990s, the number of attendees skyrocketed. As crowds grew to 25,000 in 1991 and then made a massive leap to 40,000 attendees in 1992, according to the Office of Student Life, the number of accidents, crimes, violations and arrests increased as well. After this drastic surge in attendance, local law enforcement drafted a “Five Year Plan” to help limit the number of party-goers who would flood I.V. the following year in 1993. Similar to the restrictions we see today, the plan came equipped with noise ordinances, confiscation of possibly dangerous props or costumes, barricades and restricted parking, with aims to improve the safety of the community and keep things under control.

According to Geoff Green, a UCSB alumnus who served as Associated Students president during the 1993-94 academic year, his year in office marked a huge transition towards a significant increase in police and authoritative presence during Halloween. Green said that although the plan has good intentions and the safety measures were needed, students seemed unsure on how Halloween would play out.

“For the most part, people were onboard with the principle, but concerned with implementation,” Green said, “especially since this was only a couple years after Rodney King and the L.A. Riots — people were suspicious of law enforcement and authority.”

According to Green, following the increase of police in I.V. caused an increase in the level of resident complaints against police.

“1993 marked a significant jump in the level of police enforcement in I.V. during Halloween, taking authoritative levels to an all-time high,” Green said. “With this massive influx of authoritative enforcement, Isla Vista felt like a police-occupied state for many I.V. residents and afterwards, there were dozens of complaints of poor treatment by authority and many cases of civil rights abuses by authority.”

Green said students organized to counter the increased presence of law enforcement with an overwhelming amount of monitoring done by citizens. Green put cameras into the hands of student volunteers to monitor Halloween in general, but also to monitor the police force. This civilian tactic worked to balance the huge numbers of law enforcement officials and keep them on their best behavior, Green said.

“Recording kept law enforcement on its best behavior and it went very well, it was very peaceful and it greatly reduced the number of complaints against police behavior and unjust arrests,” Green said. “It worked as a friendly reminder to authority that we’re watching out for our community — it wasn’t an anti-cop thing, it was a way to respond to the overwhelming authority presence through being our own watching presence in the community.”

According to Senior Deputy Mark Ward, who has worked as an I.V. Foot Patrol officer for the past 15 years, the increasing numbers of enforcement officials is necessary to protect I.V. during Halloween each year.

“Halloween seems to get bigger and bigger every year,” Ward said. “Consequently, with increasing numbers of visitors, the law enforcement presence also has to increase. There has to be more law enforcement available to protect the growing number of people.”

Ward said he noticed that in the last few years there has been a change in attitude towards law enforcement officers, and it has been “generally more assaultive.”

“Years ago, back when I started as an officer, if you saw a law enforcement officer fighting somebody you would stop what you’re doing and help the officer,” Ward said. “On the other hand, nowadays, in that same situation, everyone or witness now take out their devices to video what’s going on.”

However, Green said that video recording is a part of officer-to-citizen accountability.

“The advantage generally goes to law enforcement when there are stationary cameras set up and police are largely given the benefit of the doubt in cases,” Green said.

According to Ward, there has been a “fundamental change” in behavioral issues in I.V. — particularly in how college-age students react to law enforcement.

“When I started as an officer in I.V. you could walk up to a person or group and ask ‘What’s going on?’ and they would answer and be respectful,” Ward said. “Now with a simple ‘How are you doing?’ instead of receiving an answer, the group or person in question starts videotaping and chooses to escalate the encounter into a fight and it’s a waste of time, it’s dangerous and it puts everyone at risk.”

According to Green, the level of police presence in Isla Vista will “probably continue” as the norm until I.V. has more say in its own governance.

My years in IV were great 84-94. We had a great relationship with the foot patrol. You could say “how are you doing tonight” and have a civil conversation. Our parties were large with lots of underage drinkers. But there was an understanding between the residents and foot patrol (I won’t comment on SBPD, CHP or other imported agency help)… we held up our end of the deal (no open containers in the street, no violence, turn the music down at 10, no high schoolers pukeing or passed out on the front lawn, no drugs in public) and the cops… Read more »