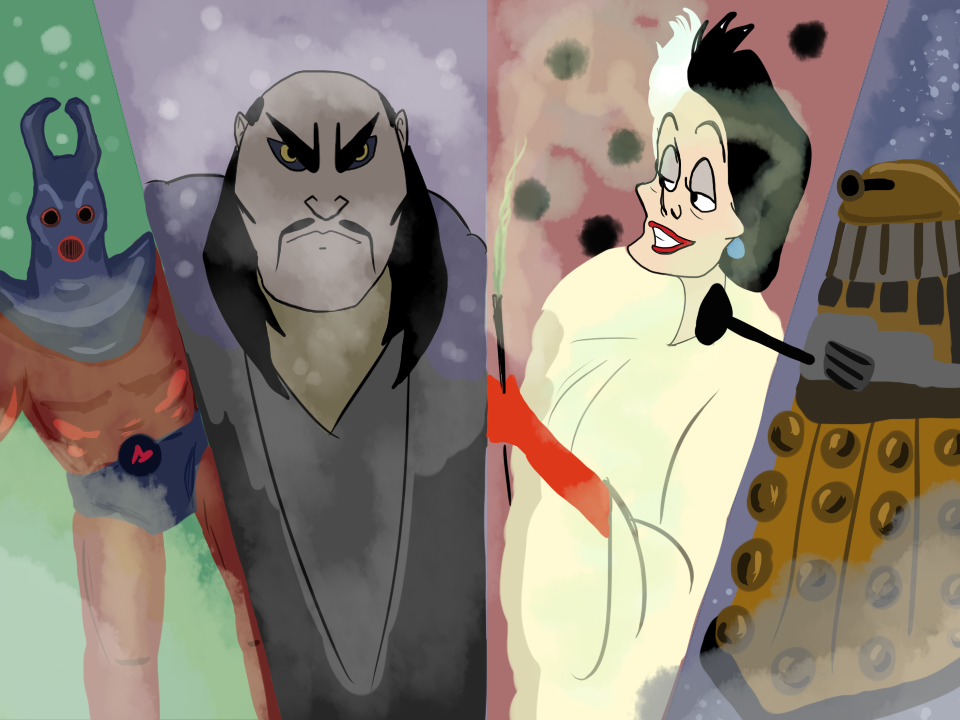 There’s the spidery quirks of Cruella de Vil, the mad eyebrow game of Shan Yu, the utter insanity of Fred Figglehorn and the insidious charm of Richard III. Where there’s a hero, there’s always a villain. Here are some of our favorites.

My favorite villain of all time is Cruella de Vil. Let me preface this by saying I love dogs and don’t condone killing puppies to make coats, but still, I have to respect Cruella for her great fashion taste and boss attitude. Throughout the film, Cruella had a clear (okay, diabolical) goal and a set plan in mind to get things done. Rather than doing the dirty work herself, she employed two dowdy men to do the job and carried on her life of luxury and extravagance. For the most part, Cruella was the perfect picture of an independent woman with class and elegance, and she had an awesome collection of furs.

Let’s talk charisma. In fact, let’s talk Hannibal. Dr. Hannibal Lecter. Protagonist in the third of a series of suspense novels, this cunning, cultured and multilingual psychiatrist not only delves in the brains of his mental patients — he eats them as well. He’s a cannibal with such class that he prepares gourmet meals from his victims’ flesh, served with a side of fava beans. He’s a master of irony, the man behind the chillingly-charming apology, “I do wish we could chat longer, but I’m having an old friend for dinner.” Besides the fact that he intends to literally have his old friend as dinner, his penchant for wordplay and courteous demeanor fools us all. Hannibal stands most intriguingly terrifying in my world of horror, luring victims in until it’s far, far too late to escape.

Dr. Heinz Doofenshmirtz, the scatterbrained and forgetful evil scientist from “Phineas and Ferb,” is my favorite villain. A hilariously nonthreatening character, Doofenshmirtz is never taken seriously by any of the characters throughout the show. His one-sided rivalry with Perry the Platypus and his sinister plots to take over the tri-state area (that do not ever seem to succeed) never fail to entertain audiences of all ages. After it is revealed that the reason he creates his schemes and inventions is caused by the lack of recognition and love from his unhappy childhood, he becomes a more relatable and likeable character. What makes Dr. Doofenshmirtz so different from other villains is the fact that he’s not actually evil; he’s a human being with insecurities of his own. It also helps that his accent and famous line, “Curse you, Perry the Platypus!” is pretty fun to imitate.

Fortune, beauty, love — these are typical goals that villains seek. Shan Yu of the Disney classic “Mulan,” however, seeks power. And in order to seize that power, he looks for complete annexation of China. What makes Shan Yu a respectfully cruel villain is his blindness to gender roles in a traditional, rigid setting that prohibits women from enlisting in the army. He recognizes Mulan as an equal opponent in strength and wit during a time period ridden with strict gender conventions. Shan Yu of the Huns, although unforgiving and brutal, still acknowledges Mulan’s capability. I’m impressed by his forward thinking, and I’m sure Mulan tacitly appreciated the acceptance.

“Exterminate! Exterminate! Exterminate!” Anyone that follows the longest running sci-fi show of all time, “Doctor Who,” will recognize that this signature chant originates from the almighty villain of outer space: the Dalek. The Daleks are a strangely cute and simultaneously pesky race of cyborgs whose arms are composed of a plunger and a whisk that shoots lasers. As adorable as they sound, they are not the best kind of people — the reason why the Doctor is the last Time Lord alive is because the Daleks killed off all of the others, including his family. Although they appear to be relentless and stone-cold serial killers, it is revealed in an episode that they are not as inherently evil as they seem — underneath a Dalek’s armor is a little, lonely organism that has feelings too. They may be easy to hate; but as misunderstood little critters, they are hard not to like.

For many, Oct. 31 is a night filled with mischievous bliss and candy-toting children amiss, but for one it was the night where everything was destroyed. He was the most powerful, devious, sassiest dark wizard the world had ever seen. All cowered in his name — I urge you to not say it, for it could be the very last thing you utter. Those that dared to think he was vanquished clearly doubted the clever mind of You-Know-Who, who had a backup plan of survival and broke his immortal soul into pieces. Voldemort was a cunning badass of a wizard, equal parts smart and evil.

Flashy, bold and eccentric, Yzma from Disney’s “The Emperor’s New Groove” is always hatching grand schemes to get what she wants. One of her first plans to kill the emperor was to turn him into a flea, put him in a box, put that box in another box, mail that box to herself and smash it with a hammer (though she eventually settles for poison to “save on postage”). A woman of power, Yzma will go through great lengths to reach her goals, even when she gets dumped in a pile of jungle slime. She’s a woman of spunk who has her own roller coaster leading straight to the lab, as long as she presses the right lever, that is.

Ma-ma-ma-MAN RAY! The most evil villain in all of Bikini Bottom has his own place in my childhood. The red and blue villain has his most famous scene when Spongebob and Patrick are watching over the lair of Mermaid Man and Barnacle Boy. The best friends try to teach Man Ray to be a good person, resulting in Patrick dropping his wallet as a test. After grabbing the wallet and trying to hand it back to Patrick, Man Ray is refused repeatedly by Patrick, who claims, “Nope, not my wallet.” The exasperation on the face of the villain will forever have a place
in my memories, along with the giggles of me and my sister.

My villain of choice would have to be from the adventures of my favorite comic series hero, Batman. Initially I would probably side with Mr. Freeze, but Heath Ledger’s performance as the Joker in “The Dark Knight” wins. The Joker is more menacing than the Riddler, a mysterious villain who sent dangerous gifts to his opponents, on which he would attach a small riddle that usually led to figuring out what the “present” was. Although similar in theatrical flair, the Joker is a crueler character; you do not know what’s coming until it’s already occurred and there is no way to stop him unless something extraordinary happens; at least the Riddler would leave a clue to let you know what was coming.

Fred Figglehorn in “Fred: The Movie” is one of the most defined villains in recent cinema: a stalker suffering from possibly schizophrenic hallucinations who will stop at nothing to get the girl he lusts after: Judy. What he intends to do when he “gets” her remains a mystery throughout the film. Fred is a truly terrifying presence. His high-pitched, constantly-screeching voice strikes terror into the hearts of his enemies and generally confuses everyone else.  He also demonstrates sociopathic tendencies when he pretends to invite people to his party, only to tell them they are not actually invited purely out of spite.

The Machiavellian Richard III is one of Shakespeare’s greatest masterpieces: a villain so criminally awful that it is almost seductive. Described as a horrifically hunchbacked man, Richard is grossly deformed and cannot walk “straight in front of a nymph.” So it’s a wonder that he is able to woo the beautiful Princess Anne, widow of the Prince of Wales whom Richard murdered.

At first, Anne essentially tells Richard that he should go to hell, and Richard responds that he is fit for one more place: her bedchamber. He proceeds to tell her that her beauty kept him awake at night, and it forced him to kill her husband so that he might lay in her bosom for an hour. Anne, vain cat she is, unravels under the compliments, and she becomes a missus to the murderer. What is so invigorating about Richard is that he manipulates everyone around him and plays the role of an actor so well that his crudeness is taken for flattery.