The Daily Nexus
Sports Blogs
Nexus Sports At the World Series
October 29, 2014 at 5:00 am by Mark Salay and Jackson Kerr

With Game 7 of the World Series between the San Francisco Giants and Kansas City Royals played tonight, Nexus Sports presents a special report from Game 4 of the series by staff writer Jackson Kerr, and gives you a look at what you didn’t see on camera. 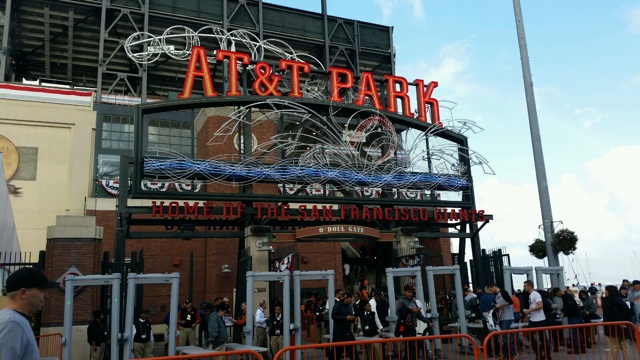 AT&T Park, the site of Games 3-5 of the World Series. The Giants entered down 2-1 in the series after a tough one-run loss in the previous game. Another Giants loss would give the decisive advantage to the Royals. Buster Posey, Pablo Sandoval, Hunter Pence and the rest of the Giants hitters would need to get on the board early before Kansas City handed the ball to its dominant bullpen. 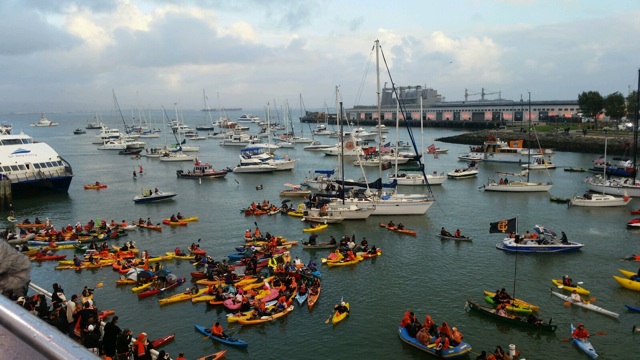 Boats gather in McCovey Cove to catch a home run ball before lineups are introduced. 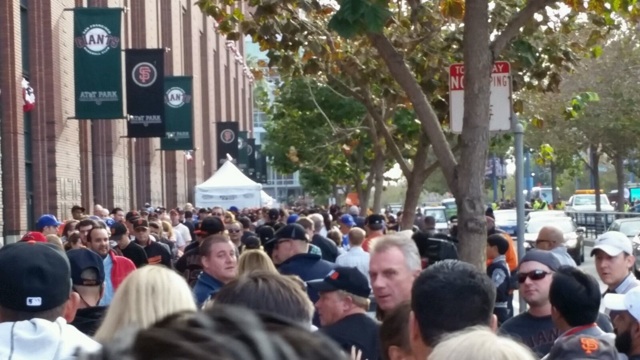 As fans begin to file into the stadium, it’s time to play, “Find the greatest quarterback of all-time”. Ready? GO! 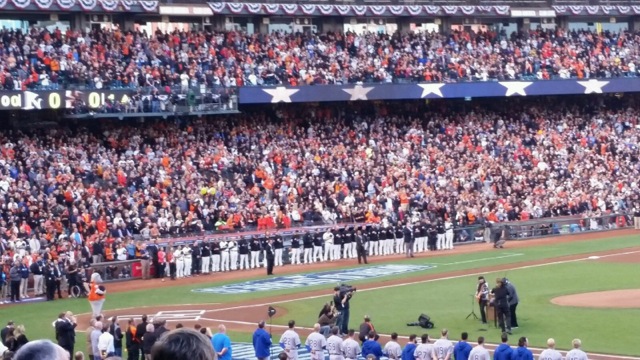 The stadium salutes the flag as Carlos Santana and his son Salvador perform the Star Spangled Banner. 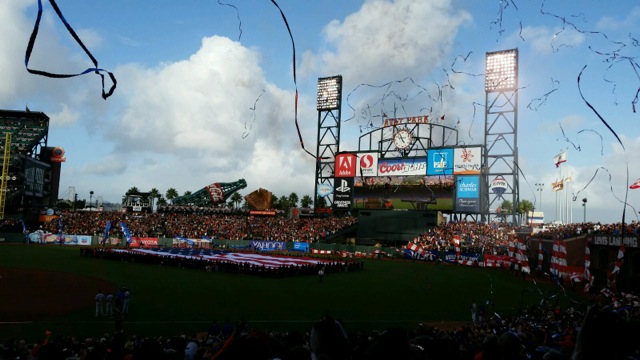 Red, white and blue confetti rains over the stadium as the national anthem ends. ‘MURICA! 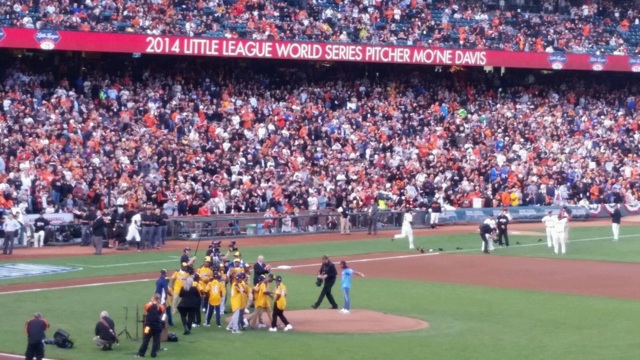 Mo’ne Davis, a 13-year-old pitcher who became the first girl to throw a shutout in the Little League World Series, throws the first pitch of Game 4. Despite being told to throw from the front of the mound, Davis confidently stepped onto the mound instead, and to no one’s surprise, threw a straight dart into the catcher’s mitt. Like a BOSS. 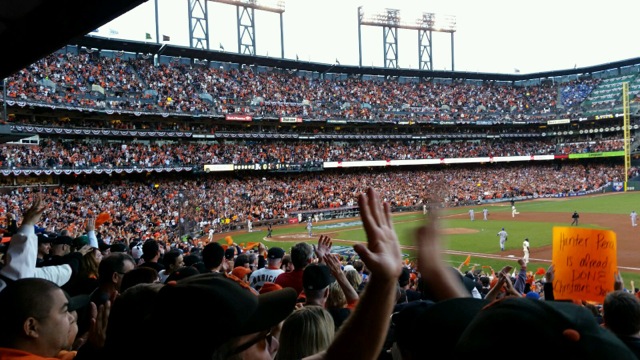 Game underway. Bottom of the first inning and fans celebrate as the Giants get on the board first on a force out by Hunter Pence. 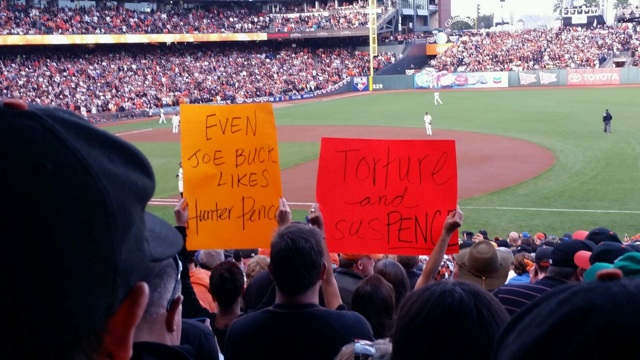 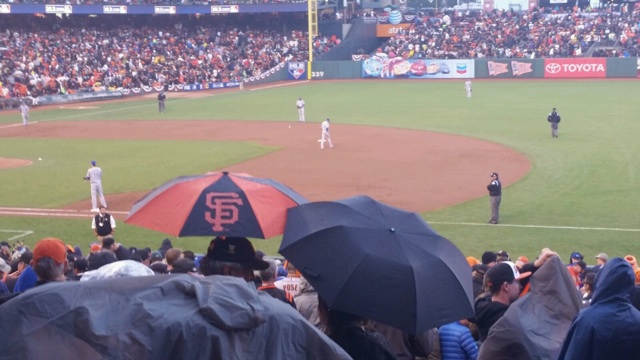 Fans pull out their umbrellas as the rain begins to fall. San Francisco was down 4-1 entering the third inning but 10 unanswered runs by the Giants gave them a commanding lead. Rain no problem for Giants. 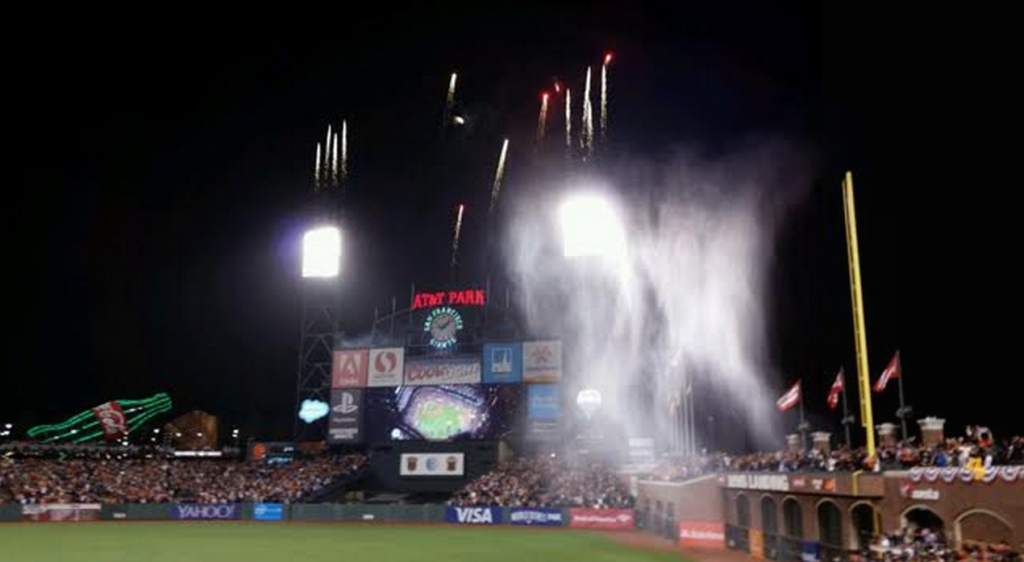 Fireworks shoot out of the scoreboard as the Giants win 11-4. San Francisco would go on to win Game 5 at home before losing Game 6 in Kansas City, setting the stage for tonight’s Game 7. 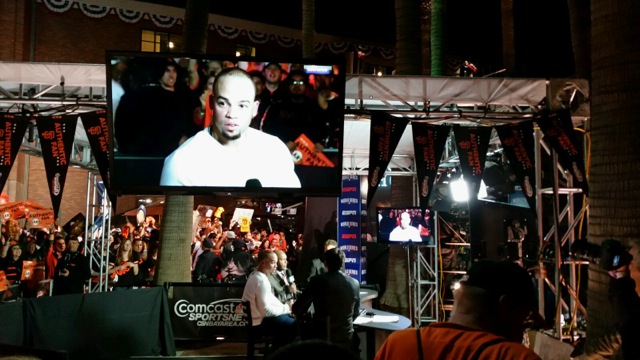 Giants left fielder Juan Perez on the CSN Bay Area live broadcast after the game. The next day, in the middle of Game 5, Perez learned his friend and former teammate Oscar Taveras, a 22-year-old outfielder for the St. Louis Cardinals, died in a car accident. Perez, a rookie, mustered up enough strength in that game to deliver a two-run double that helped the Giants win. Despite who wins tonight, we are reminded that baseball is just a game. 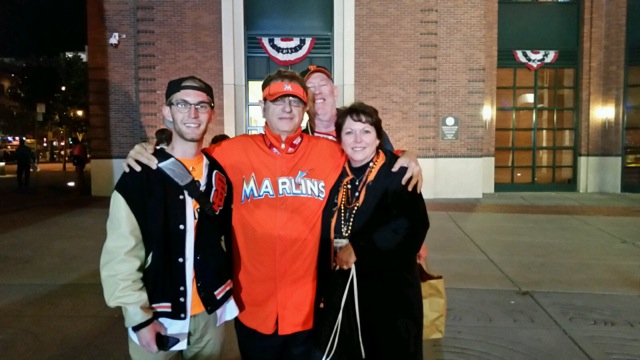 A picture with “Marlins Man”, Laurence Leavy. If you’ve been watching the World Series, you can’t help but not see this guy with his bright orange jersey behind home plate for every game. Apparently he’s a rich lawyer from Miami with too much time on his hands and loves to go to the biggest sporting events (27 Super Bowls, 64 NBA Finals games, and 88 World Series games). The Internet buzz he’s generated has led to a reality TV show offer. Is wearing ugly clothes in front of a camera the only thing you need to become famous now? 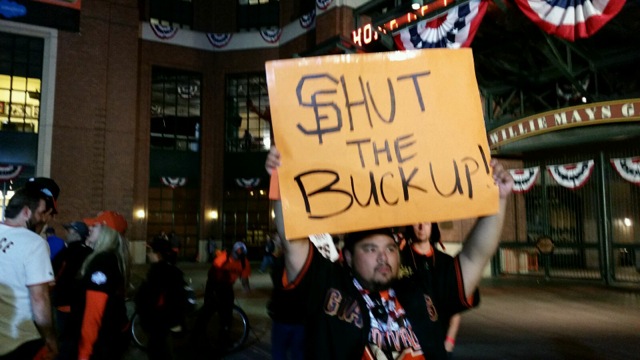 With a champion to be crowned tonight, Giants fans have one last message for the 2014 MLB season: Shut the buck up, Joe.