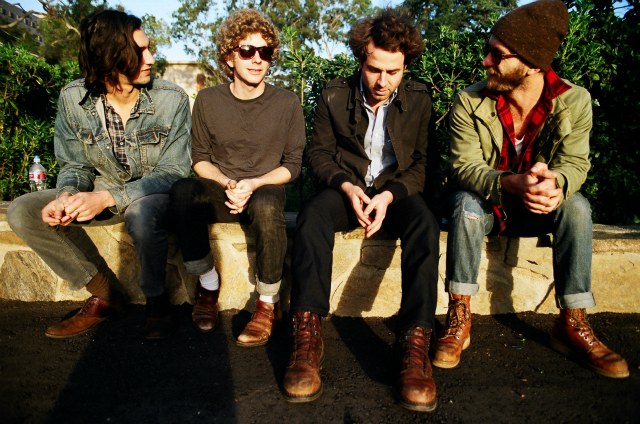 Precisely halfway through the set, baby-faced frontman Taylor Goldsmith gave a flirtatious wink to a middle-aged woman standing two feet away from him. The woman turned to her two friends and buckled her knees like a teenager swooning that the lead singer of L.A.’s indie rock band Dawes gave her such a generous display of affection.

Around her, 200 people of every generation mouthed lyrics to “Time Spent in Los Angeles.” It was a grand sight to behold: grandmas, moms, dads and pre-teens gathered together, everyone knowing words to the familiar songs and eager to take in new tracks.

Dawes has been around for quite a bit — officially a band on Wikipedia for 5 years in 2014 — and judging from Friday’s New Noise Music Festival performance at SOhO, they’ve amassed quite the following. Granted, their fan base is pretty close by in L.A., but it must’ve been nice to have so many admirers take the drive up the 101 to catch a hometown hero act.

Taylor wasn’t the only Goldsmith who had the audience grinning in satisfaction. Behind him, his curly-haired brother Griffin rocked the drum set and sang harmonies to meld with Taylor’s folksong voice. Bassist Wylie Gelber later noted in an interview on the SOhO patio that “Griff might be a better singer,” to which Griffin stated, “But Taylor is THE showman, you gotta be ballsy to do what he does.”

Griffin was presumably referring to Taylor’s insane guitar riffs. When Taylor ignores the microphone and focuses on the guitar, he goes into a trance. His eyes glaze ever, his teeth chew on his top lip and his body moves erotically, a motion that translates to the insane finger-plucking. He invited up a good pal who looked like a regular cowboy onstage to riff on “From a Window Seat,” from their latest album Stories Don’t End. The cowboy wore a toothy smile and a sense of control which contrasted Taylor’s glazed-over, out-of-this-world musicality.

Also on set was keyboard extraordinaire Tay Strathairn, who got picked up by the Goldsmiths seven years ago. The other three have known each other on a daily basis for more than 10 years, and according to Gelber, they get along really well.

“We do pretty good. We’re on tour so much that if we didn’t get along great it would be a nightmare. We literally have to spend every single day together. And back when we toured for seven years, it was just us in a van driving around the country.”

Dawes’ car in those days was a black, 14-passenger van that they put 5,000 miles on. It was a brutal and magical time, with the constant driving through the night to get to the next show. “[We used to] drive from Des Moines to Chicago, and literally pull up to the venue, do a sound check, play and drive [off] to a new place,” said Gelber.

Now Dawes has gotten beyond the days of switching off midnight drivers, and they’ve got enough clout to employ people. So it’s fun for them to play the small venues they used to with a proper crew to handle all the administrative business.

“We played this exact place without a crew four years ago. Rolled up and used the guy who worked here to run our sound who never heard of our band,” said Gelber. “Now it’s so much more plush. We have a crew, we have a hotel, everything is dialed in. It’s amazing.”

Gelber, whose first name Wylie is pronounced like the cartoon coyote that chases after road runner, is a floppy-haired, laid-back guy. He explained that the purpose of the SOhO show and the mini-California tour Dawes embarked on was to practice their new songs, which will be released in a new album later this year.

“Essentially we are rehearsing in front of everyone … we’ve done it before in a rehearsal room and it start[ed] sounding weird and sterile,” said Gelber. “It’s much easier to figure out what works and what doesn’t when you’re playing at a show … you respond better at a show rather than when it’s the four of you.”

The idea that this show was a “rehearsal” explains why each band member seemed to be in their own head onstage, figuring out particulars. While Taylor Goldsmith sang with a pick in his mouth and transported to another world on guitar, Wylie Gelber’s tall frame reclined on the speaker, as if playing the bass on a bed at home. Griffin Goldsmith kept the tempo alive on drums, but even he closed his eyes behind wire-frame glasses. Tay Strathairn kept to the keyboards and experimented with groovy Cuban beats.

The four individuals blended together beautifully, and although the set included many new songs, their loyal fan base swayed in appreciation. “This really means the world to us,” Taylor Goldsmith murmured. “Favorite show of the tour by far.”

A print version of this story appeared in the Daily Nexus on Thursday, Oct. 23.