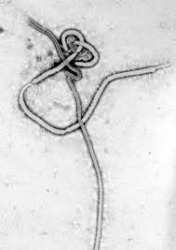 I sit quietly in my lecture hall when I notice someone cough innocently a few times. Promptly, a friend responds in a freaked out voice, “Cover your mouth! I don’t want Ebola! What the fuck?!”

It wasn’t more than an hour later that I sit enjoying my Panda Express that I overheard frantic conversation coming from a booth, describing in horror that someone in Dallas, as well as a patient in New York, supposedly contracted Ebola. “Once that shit hits Isla Vista, we’re fucked.”

The plague of misinformation that has hit the nation is perhaps more dangerous than the Ebola virus itself. While the fact remains that the Ebola virus is extremely dangerous and ravages the human body, the danger it presents to our country has been vastly overstated.

After a few brief surveys, it is clear that many people really don’t know what the characteristics of Ebola are. Many just thought it to be some sort of incurable disease that promptly led to your death. However, here are the facts:

Ebola virus disease infects humans and primates. Symptoms are flu-like, beginning with fever, sore throat and aches and pains. Then, as symptoms get worse, vomiting, diarrhea and rash set in. The virus spreads through contact with blood or body fluids of someone infected, it can NOT spread through the air. The most gruesome statistic (and the one that should actually scare people), is the 50-70 percent mortality rate.

An NPR report estimates your risk of catching Ebola as ASTRONOMICAL. Just how out there is astronomical you ask? Statistical models place your chance at about one in 13 million. You’ve got a better chance of being struck by lightning or dying in a plane crash than contracting the Ebola virus and a 50 percent chance to overcome it at that. So let’s realistically put your risk of dying from Ebola at one in 26 million.

If the odds are so low, why all the commotion and alarm? The answer lies in the media, who, in order to remain relevant, sensationalize every and any story they get in regards to the disease. Surely, you think to yourself, they can’t bear all the blame? Right you are! The blame also rests with the audience, who take anything that the media spews at them as irrefutable fact. Through laziness or something else, people do not question the information they get from the media; rather they take it for face value.

This same lack of curiosity led to the outbreak of microwaved iPhones, believing that we only use 10 percent of our brains (“Limitless” to blame) and terrible, pre-packaged political opinions taken to heart. Ironic as it is that I’m writing this on the opinion page, I don’t indulge in politics nor do I generate any ideas on things I know nothing about.

In an age where a ton of information is readily accessible on the Internet superhighway, mediums like Twitter and Buzzfeed cannot be relied upon for news. Their brand panders to the most easily influenced and susceptible reader imaginable. Click-bait articles that make you say, “WOW! These ARE 19 things I say when I’m on a road trip!” or “Holy moly, these 23 things describe my best friend’s relationship with me PERFECTLY!” The thought going behind the titles is so basic and formulaic, anyone can do it. 19 ____ That Only ____ Remember, or 11 ______ That You _____.

As I write this, I’m logging onto Buzzfeed’s website, and you will not believe what I see. Or maybe you will. An article on their front page, titled “Life in New York Goes On After City’s First Ebola Diagnosis” with a seemingly somber picture featuring a distraught looking man with a mask covering his mouth. Even the guy in the picture doesn’t know! Someone tell this man that he can’t get Ebola through the air! The article is so full of nonsense it’s hard to believe people read these publications. But they do, and when you realize that this is where people get their news, it becomes more believable that the hoopla that is the Ebola “crisis” exists.

This ignorance of knowledge towards current events has deep seated ramifications. Elections for who run our country are based upon votes that come from these same people (and while it is debatable that we are now an oligarchy that’s run by lobbyists, let’s pretend that’s not the case). I, for one, do not want policies to be based upon what the Buzzfeed majority wants. Many have been bringing attention to this issue for hundreds of years now. Thomas Jefferson said that letting uneducated people vote would have disastrous effects upon the country. It would seem that he had a great point, because the state of this country isn’t exactly fantastic.

Do some research, don’t just take hearsay as truth. I’m not going to tell you not to make Ebola jokes, but that shit is no laughing matter. I don’t think anyone would enjoy bleeding out of every orifice (yes, that does happen). It all sounds really cliché, but knowledge really is power and I can’t tell you how many easy bets I’ve won knowing that the person betting me believed some crap like he uses just 10 percent of his brain. Maybe he did, but I sure as hell don’t. I’ll just leave a nice Socrates-based quote here: “Too many people have opinions on things they know nothing about. And the more ignorant they are, the more opinions they have.”

George Kalinkin cracked the BuzzFeed code… He’s dropping out and getting into “news” tomorrow.