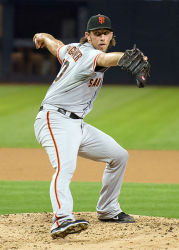 The San Francisco Giants sit one win away from their third World Series championship in five years. Tonight, the Giants and the Kansas City Royals square off in Game 6 with the Giants up 3-2 in a series that looked to be going in the Royals’ direction.

With the series tied 2-2 after a necessary win Saturday night, Giants’ ace Madison Bumgarner shut down the Royals Sunday as the Giants won 5-0. Bumgarner pitched nine shutout innings, striking out eight while allowing four hits and zero walks. His World Series record is now 4-0 with a 0.29 earned run average. He is quickly penciling his name in the history books as one of the greatest postseason pitchers of all time, and he is only 25 years old.

With the Giants leading 2-0 entering the eighth inning, Juan Perez came to bat with two men on base. Perez had learned earlier in the game that his good friend Oscar Taveras, a 22-year-old future star of the St. Louis Cardinals, had passed away tragically in a car accident that day. Perez was able to focus enough to hit a ball off the top of the wall for a double, scoring both runners. How he was able to focus after that terrible news is incredible and I’m sure that he dedicated the hit to his friend Taveras.

On Saturday night with the Royals up in the series 2-1, it appeared that Kansas City was going to take a 3-1 lead with the team leading the game 4-2 entering the bottom of the fifth inning. Everyone has talked about Kansas City’s shutdown bullpen and how the Giants would have no chance of breaking through once the Royals took the lead. But the Giants started clawing their way back into the series with a Hunter Pence RBI single and a Perez sacrifice fly off relievers Jason Frasor and Danny Duffy.

The scoring continued in the sixth inning as Pablo Sandoval hit a two-RBI single off left-hander Brandon Finnegan. Sandoval, a switch-hitter, only hit .199 from the right side this year, so it was a big hit from him to give the Giants the lead. After Brandon Belt singled to move the lead to 7-4, the Giants continued to tack on runs the next inning, as they won the game 11-4.

The series now moves back to Kansas City with a rematch between Game 2 starters, Jake Peavy and Yordano Ventura. The Giants lost Game 2 as Peavy allowed four earned runs in five innings in a 7-2 loss. In order for the Giants to win tonight, they will need a better effort out of Peavy and to jump on Ventura early. San Francisco has shown that its offense is not completely dead and that it can make a dent in the score with smart plays on the basepaths and clutch hits.

The Royals need to win tonight, so they will be looking for Ventura to get through six innings with the lead so they can turn to their bullpen that before Game 5 had been practically unhittable. Look for Kansas City to try to burn the Giants on the bases with their speed. Both teams want to lead this game before the other team’s bullpen comes in.

As exciting as it would be for this series to go seven games, I will stick with last week’s prediction that the Giants will win the series in six games as they close it out tonight off a great pitching performance from Peavy, giving the Giants their third World Series title in five years.