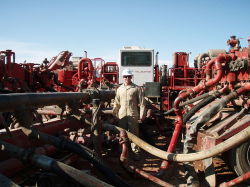 Fracking hurts Californians. Every day, in communities across the state, people are forced to deal with the negative impacts that fracking has on their health, land and water.

You have the power to put a stop to fracking right now by issuing an immediate moratorium on fracking in California.

This is your biggest legacy, sir. But I must be frank.

If you continue to kowtow to the oil, gas and drilling companies as I am positive you are, you are going to see the swift demise of an exuberant state that will shut down when all of what is left of the water by drought is poisoned forever by these carpetbaggers. They will leave and bear no consequences. What a pity…

They have a vengeance to get what they can out of our precious earth and take it to the nearest refinery that can prepare the dirtiest oil in the world for the global market. Doesn’t this sound selfish and, really, insane? This is a “bridge?” This is U.S. energy independence? What a crock!! It is a lie and a most dangerous one.

Have you taken a look at what is happening to our state’s citizens who are being sickened by the fracking and other extreme oil extractions in the north, Central Valley territory? First they were blighted and still are by ag industry chemicals and now this.

Like Ebola, the fossil fuel infection is creeping south and I’m not talking about conventional oil drilling. That industry of a hundred years ago once covered much of Southern California, but now those sites are being utilized for the new methods and creating havoc. Baldwin Hills, Los Angeles has suffered. Platforms out of our reach, offshore, are slant drilling and operate with cracked casings emitting methane in gross amounts.

Please come to the support of the County of Santa Barbara.

Support “Yes” on Measure P to ban any further fracking and other methods of extreme oil extraction. This is a fight for ALL of our lives. We are being outspent by the richest of anachronistic industries who have been selling this big, fat lie that they’re going to lose money from their present operations, that jobs will be lost as a result and that their contribution to the county coffers (not included in one snippet of coverage-Washingon Post) will be a loss and a detriment to the county services, e.g. firefighting and school funds.

This is a scare tactic and not true. Their present operations are EXEMPT, WRITTEN INTO THE INITIATIVE. They will keep making the money they are raking in, the slowly sickened workers will not lose their god-forsaken jobs and the industry will still pay their taxes covering those very important services. Further, they don’t even pay extraction fees where in other locations they must.

They lie, threaten and appeal to people’s greed for a very big reason. They have plans to drill 10,000+ already designated sites just as soon as they kill Measure P and get those locations in unincorporated areas — around you and me — permitted.

If they succeed to do this, our robust economy will be a goner. If we don’t have clean water and they poison the rest forever with lethal mixes, we can kiss off everything we hold dear and are so proud to share.

Like many other beautiful counties of diverse California, we maintain (although the drought is causing hard cuts) a robust economy. Our array of business is versatile: agriculture, ranching, the high tech industries, tourism, viticulture, higher education and the fishing industry to name some. Oil extraction sings in a minor key and doesn’t qualify as a throbbing industry of true, energy sustainability. We need to plug it up NOW.

Why doesn’t the oil biz make a wise decision to get into clean alternatives? What’s keeping them from doing this? Seems really smart to me.

The picture they draw for me is that of a junkie with kids. They just don’t give a damn about those children. What is of maximum of importance is the next fix.

Adrianne Davis is a Santa Barbara resident and a parent of a UCSB alum.