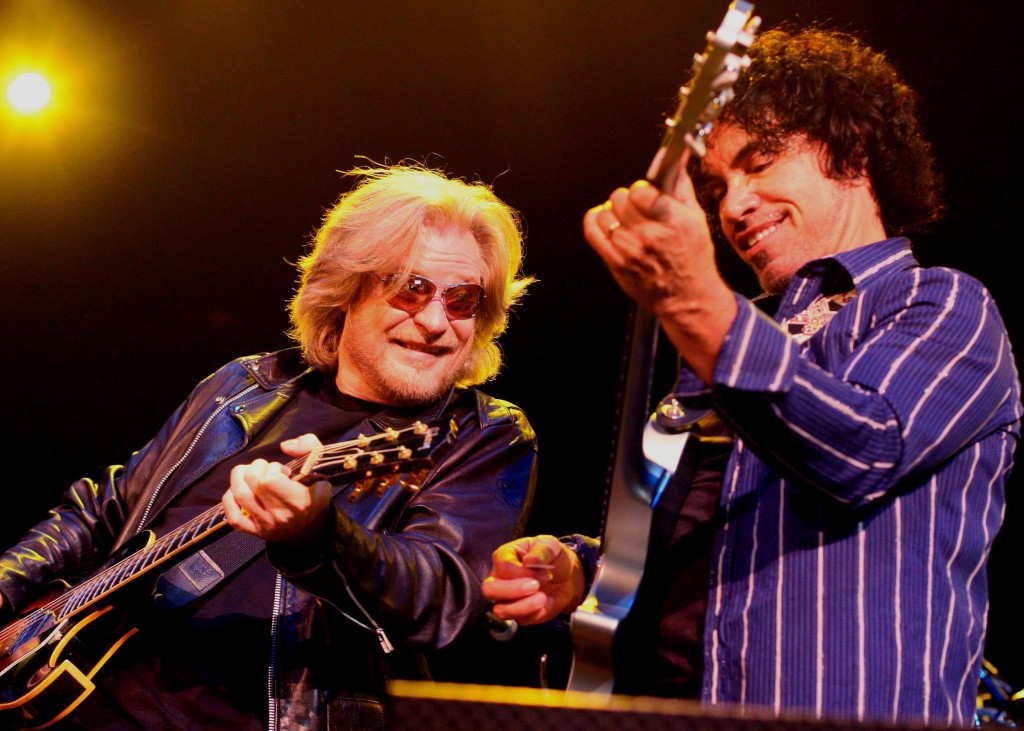 I arrived at the Santa Barbara Bowl as people were trickling into their seats, just in time to catch the opener. His name was Mutlu, and he set the tone for the night with soulful love songs accompanied by rhythmic guitar. A few times he made me giggle, and I blushed from lyrics like “Caramelize me baby / Rub me in nougat from my head to my feet / Caramelize me baby / You know that daddy’s gotta eat.”

The last few people were just finding their seats as the rest of the crowd anxiously waited in the dark amphitheater when the headliners finally appeared. Daryl Hall took center stage, his platinum feathered hair swept back, revealing sunglasses that he left on for the whole show. Wearing a black button-down shirt with white hemlines and a matching suit jacket, Hall looked pretty snazzy to say the least. To his left stood his counterpart, John Oates, wearing a sleek, all-black ensemble. A funky tune started playing, which I recognized as the intro to the song “Maneater,” and within seconds the crowd was on their feet and waving their arms. After the first song, Hall greeted the crowd with a standard, “Good to see you guys.” He mumbled, “We haven’t been here in a long time,” leading to an indecipherable contemplation with John on exactly how long it’s been. In the end they couldn’t decide.

The eclectic crowd was composed of everyone from veteran fans to college-aged hipsters, all similarly eager to see Hall & Oates perform. Together they conjured an odor that was the trifecta of weed, beer and the fresh woodsy air from the nature surrounding the stadium. It was my first time at the Santa Barbara Bowl and I was taken aback by its beauty, regularly glancing around to fully take in my surroundings. I happened to spot a middle-aged crew almost get busted by security for lighting a joint. In a way that instance encapsulated the overall vibe for the night. No real binary existed between the old and the young, and in truth the “older” crowd was the rowdiest of the bunch, as if the roles were to be reversed.

The seven-piece band consisted of guitar, drums, keyboard, saxophone, chimes, flute and vocals. Having gone to many EDM shows recently, I was very aware that every sound emitted from the stage was made live by the people in front of me. I was careful not to take that fact for granted, since it’s become somewhat of a rarity in what we consider “live” music. Hall’s vocals impressively hit every note attempted, and when mixed with Oates’ voice the outcome was rich and soulful.

Saxophone player Charles “Mr. Casual” DeChant was a vision in his sterling silver suit, turquoise blue shoes and silver elbow-length hair. I was smitten. His passionate sax solos stole the show on several occasions, most notably during “It Isn’t So,” and an extra loud cheer could be heard throughout the entire stadium whenever he took center stage. Towards the end of the show, Hall traded his guitar for a keyboard during “Do What You Want, Be What You Are.” He played the keyboard with equal parts skill and vivacity, and I noticed lines of people spilling into the front seating area. By the end of the song, a mass of fans surrounded the stage, swaying in unison.

Hall & Oates left the stage prematurely at approximately 9:10 p.m., but came back out to appease screaming fans. They didn’t disappoint with two of their most famous hits: “Rich Girl” and “You Make My Dreams Come True.” When the lights went out a second time, the insatiable and inebriated audience was still not satisfied and a sizeable crowd pooled at the edge of the stage.

The duo returned with another banger, “Kiss on My List,” and the show ended when Hall thanked the crowd for coming out. He also made sure to call attention to his TV show, “Live From Daryl’s House,” which features himself and fellow musicians cooking, eating and jamming at Hall’s home in New York.

Seeing Daryl Hall and John Oates live in concert was certainly a unique experience, and one I will fondly reminisce on the next time I hear their songs come on my favorite oldies radio station.

To check out episodes from “Live from Daryl’s House,” go to livefromdarylshouse.com.