The Daily Nexus
Opinion
Is it Really All About That Bass?
October 24, 2014 at 8:25 am by Katherine Anderson 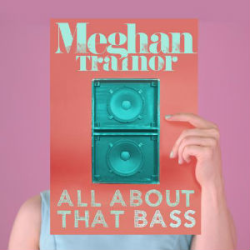 Body Image. Those two words have become a hot topic of debate over the last decade. They are especially relevant to our younger generation, who are more susceptible to the pressures of our popular culture and social trends. With images of skinny, beautiful blonde models glaring from the covers of every fashion magazine, and “one size fits all” clothing lines such as Brandy Melville becoming widely popular, it can be easy to become uncomfortable with not being as thin as you want to be. Recently body image activists have started campaigns that promote a more curvy shape. A great example is the campaign “Real Women Have Curves” which promotes a bigger body type while insinuating that you are not a “real” woman if you don’t have curves. Many public figures have recently picked up on this way of thinking by speaking or singing about having confidence as a bigger woman.

If you have listened to the radio over the past month you have most likely heard the hit song by Meghan Trainor, “All About That Bass.” The artist was praised for being confident in her skin and singing about girls who weren’t a size two. However, if you listen to the lyrics closely, you see that Trainor has taken one step forward and two steps back in promoting body image. She makes two errors in her intention to preach body peace; she not only sings negatively about skinny girls, but she also suggests that it is most important to look good so that men will like you.

In “All About That Bass” Trainor sings that “every inch of you is perfect from the bottom to the top,” however, she is really singing this to girls like her who are bigger than “normal.” It is wonderful that she is calling attention to the fact that curvy girls are not often appreciated in popular culture, however, she does this by negatively calling out other body types. Trainor excludes skinny women from her idea of beauty, calling them “skinny bitches.” Here is where the problem starts; it is not right to promote one body type at the expense of another one. The fact is that everyone is different, some people are born with big hips and breasts while others are born thin and straight. Neither person can change who they are and neither person has a “better” body shape than the other. Body image activists should focus on diversity of body shape and not on one extreme or the other. Yes, there should be more curvy women in magazines and television shows; however, it is not fair to hate smaller women because of their size. Trainor is absolutely in the wrong by calling out thinner women, even if she says she is “just playing.” Many thin women are self-conscious of their slimmer hips and flatter chests and many even wish that they could put on weight. Every body type is beautiful whether it is small, large, tall, short or anything in between. There is no template for what a perfect body looks like because there is no such thing as a perfect body.

Trainor makes a second blunder when she goes on to say that her mama told her not to worry about her size because “boys like a little more booty to hold at night.” In this simple sentence she is saying that it is ok to be unconfident in yourself as long as men find you attractive. Essentially she is measuring up her worth in the eyes of a man. In a statement she meant to be comforting, she inadvertently objectifies herself. Women should not want to be thinner or curvier for the sole reason that men find it more attractive. What causes the most concern for me is that most people listening to this song don’t notice these subtle jabs. I don’t even think that Trainor sees the extent of what she is saying. Have these ideas become so ingrained in our society that a song that hints of female objectification and skinny hatred is praised for its good message? If you took the word “skinny” and replaced it with “fat” in this song, Trainor would have been called a bully, however, not many people thought twice about the song after they heard it.

The most important part of having a positive body image is to for girls to learn to accept their flaws and see themselves as beautiful, just as they are, and not worry about how others perceive them. The day needs to come where all body types are seen as beautiful and there is no skinny versus curvy. There are already many positive examples of this in the world, however it is something that needs to be spread far and wide.

While Trainor created a very catchy and popular song, it is not one that is the best model for creating a healthy body image. It shows that we, as a society, are taking some steps in towards overall body peace, but we still have a long ways to go.

Katherine Anderson thinks you should be happy with your booty and unconcerned with whether or not someone would like more or less of it to hold at night.

http://everydayfeminism.com/2013/10/lets-talk-about-thin-privilege/?upw I find this very biased. In today’s society it is much better to be too skinny then to have curves. I agree that maybe she shouldn’t have said “skinny bitches” but finally artists out there are embracing bigger girls! And yes, they shouldn’t do it at the expense of other people’s feelings but no one seems to care about hurting big girl’s feelings when they make magazines or promote clothes. It is EXTREMELY hard to find cute plus sized clothes today but hardly any problem finding small clothing. It is very easy to judge bigger people if they have… Read more »