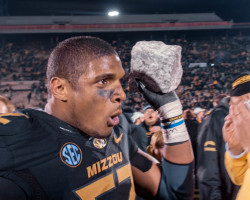 A former SEC Co- Defensive of the Year at Missouri, Michael Sam is still not any NFL roster. Photo courtesy of Wikipedia

Seems like a typical headline, right? Now think again. Michael Sam was the first openly gay player to be drafted by an NFL team. He was also one of the last players selected for the 2014 NFL draft, picked by the St. Louis Rams with the 249th pick in the seventh round.

His senior year alone at Missouri University he earned 11.5 sacks and totaled 19 yards for loss. He was also named SEC Co-Defensive Player of the Year.

Yes, the Cowboys, this means that in his time in the NFL so far, he has been dropped, picked up, and then dropped again. And all of this is without acknowledging that in the 2014 preseason, he recorded 11 tackles and three sacks in just four games. However, on August 30, he was cut from the Rams’ team roster and waived from the practice squad.

As ESPN NFL insider Adam Schefter reported, only 12 players in the preseason had 2.5 or more sacks – 10 are on 53-man rosters, one on a practice squad and Michael Sam is the player without a team.

So where does this story fall apart? And where does the argument for this NOT being a gay-thing stand? At first glance, I found myself thinking that this was purely a football decision and I had more confidence in the NFL than when I began to read more into the topic.

And that’s what this topic deserves: a second look. Headlines explain that Michael Sam wasn’t fast enough to adapt to being an outside linebacker, but too small to be a successful defensive end, or that the teams decided to focus on harboring depth within practice squads as the reasons why the Cowboys and Rams decided to go with other players.

But this doesn’t seem like a logical series of events and the statistics don’t add up. If only 12 players – presumably new, since veteran preseason play is limited — had 2.5 or more sacks and Sam had three, where else did he go wrong? Was it his team-best six tackles in his last preseason game? Or was it that he openly admitted to being gay and won the 2014 Arthur Ash Award for Courage in the process.

When he was first drafted by the Rams, I was proud of the NFL and the city of St. Louis for being the front of change in a league that is made up of some “good ol’ boys.”

Even President Barack Obama congratulated Sam and the Rams on their social progress, adding that “from the playing field to the corporate boardroom, LGBT Americans prove every day that you should be judged by what you do and not who you are.”

After Sam was drafted, even Rams’ coach Jeff Fisher stated to ESPN that the Rams “weren’t going to miss the opportunity to add an outstanding player to the roster.”

So, if you’re starting to believe that maybe this isn’t all about football, I’m right there with you. Regardless that Sam was expected to be somewhere between the 12-25th defensive end selected in the 2014 draft, there was still too much positivity circulating around his admission into the draft from the public, as well as the positive results he was generating on the field for him to be cut by not only one team, but another, and still not be kept on any practice squads.

Taking the physical game of football out of the equation, the fans wanted to see Sam play. The statistics have spoken and people also want to see Michael Sam on the field as he was second in jersey sales among rookies, behind Heisman Trophy winner Johnny Manziel.

The public was ready, so why wasn’t the league? I believe that it was the fear of the Rams and then the Cowboys to hold a controversial, media-attracting player on their roster in light of all the other NFL scandals this season. They didn’t need media hovering their locker rooms and press boxes so they decided to take the easy way out and drop him before the press uncovered something else lurking behind the scenes.

The problem with this view is that both teams could have turned what they saw as a liability into a positive, socially progressive mark for their organizations. Keeping Sam would have brought positive press and gain the respect from the public for accepting a player that no other team would take a chance on.

Finally, I support Sam’s career in the NFL based on talent alone and I believe that he has proved that he comes to play during game day. I am thoroughly disappointed that he is being denied an opportunity to show his potential and I believe that Sam, as he stated, should “continue to fight for an opportunity to prove that [he] can play every Sunday.”