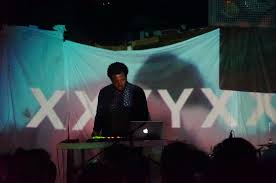 After years of waiting and ample missed opportunities, I finally caught a live performance of the young prodigal DJ who goes by XXYYXX (real name, Marcel Everett) last Thursday, Oct. 16 at The Observatory in Santa Ana.

Everett released his self-titled debut album in 2012 at age 16. The album was an experiment with electronic synths to make slow, chilled-out and repetitive melodies (a friendly policeman once described it to me as “mellow, relaxing jazz”), using samples from artists like Amy Winehouse and Alt-J. When I first heard his music a few years ago, it completely reconstructed my perceptions of electronic music and what this genre was capable of.

Of course, this was an album he put out years ago, and since artists are perpetually growing and evolving I couldn’t expect his current show to be completely true to his past style. He played an eclectic mix featuring slow-vibe, trap-infused hip-hop remixes at some points and faster, heavier drumbeats at others, alternating and experimenting between the two styles.

This was also the first show he played where he was in complete control of both sound and visuals. Vast landscapes reminiscent of vintage computer or video game graphics poured onscreen behind him. An ominous theme of nature versus technology was set by images of iPads and iPhones being destroyed with knives and hammers.

Still, I can’t say I didn’t miss the psychedelic, other-worldly feel so prominent in his album, and by the audience reaction it seemed as though they were yearning for it a bit too. I would definitely not say that what he played was unfavorable or not enjoyable by any means. But Everett’s set did fail in getting people to move and dance, which I assumed most people had come to do. In contrast, I thought the set was great for kicking back with friends in a more chilled-out environment. But then again, who is to say what objective purpose live music can or should serve?

Nevertheless, noticeable tension built up between the artist and his audience, who seemed less than enthusiastic for the greater part of the night. The extensity of their movement was limited to knee bouncing and head bopping, and this lack of reaction, sure to frustrate any artist, was not lost on Everett.

Before his performance, Everett turned to Instagram to express his frustrations with a video aptly titled “Modern crowds vs. forward-thinking music,” which showed the front few rows of people tapping their fingers and otherwise looking bored during the opener’s performance.

It’s possible that this early experience set a cynical tone for the rest of Everett’s night. At one point he grabbed the microphone to give a “shout out to the girl turned completely the other way.” It seemed fair to say there was a strange feeling going around. Amidst it all, I couldn’t help but wonder who was more to blame here: the unresponsive and seemingly unappreciative crowd, or the DJ who was not delivering what they wanted? Perhaps both were a bit at fault for not putting in full energy and enthusiasm, or perhaps neither was at fault for simply being true to their tastes.

Despite who should ultimately take the blame, Everett took the initiative about three quarters into the show. He stopped the music and again grabbed the microphone, but this time it wasn’t to throw shade. He took on a more remorseful tone this time and thanked everybody for buying tickets and coming out to support him.

In a climactic moment of admittance, he proclaimed he was going to start playing some “newer shit, not three year old shit” and wanted to see everybody in the crowd, especially the front row, having fun.

It was cool and refreshing to see him take that tone. His humble attitude was a far cry from the usually rigid stance of unwavering artistic integrity he puts forward on social media, and not something I would have expected. It verified that he felt the same vibes everyone else did that were going around and made up his mind to do something about it.

I like to believe that any good live music experience depends on a generous flow of energy moving between the artist and the audience. Although something about XXYYXX’s concert started out a bit off, I was glad to see it come together in the end. Not to mention, I can finally cross this one off my list.

XXYYXX just keeps going down hill ever since he left his friends label that launched his career and made him known to the world.

This just goes to show that who your label is and what label your on, matters. Never throw your homies under da bus.