The Daily Nexus
Volleyball
UCSB Splits Against Conference’s Best
October 20, 2014 at 5:00 am by Sarah Stigers 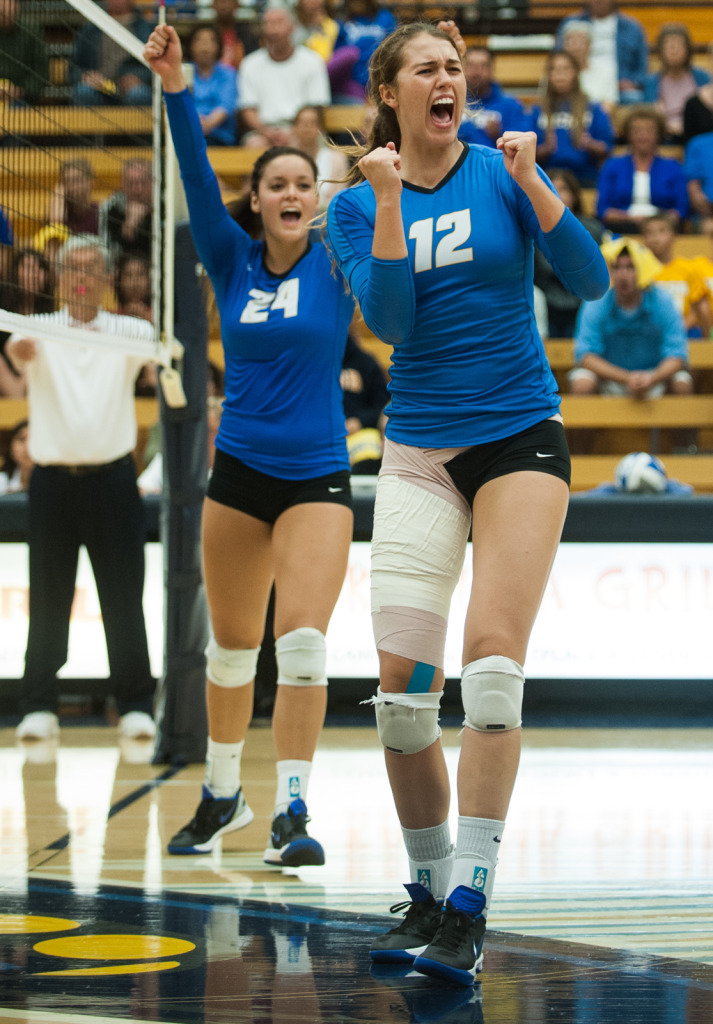 The UCSB women’s volleyball team split a pair of home games in the Thunderdome this weekend, falling to Long Beach State 3-0 and beating Cal State Northridge 3-0.

UCSB now holds a 4-3 Big West and 9-9 overall record, while the second place Matadors fell to 4-2 Big West and 13-5 overall. Long Beach is still undefeated in conference at 6-0 in Big West and 16-4 overall after wins over both the Gauchos and Cal Poly this past weekend.

The Gauchos came out with new intensity after their loss to Long Beach as they competed against and defeated an evenly matched Matador team in a 26-24, 25-20 and 28-26 match.

“We were looking for that Gaucho pride,” Head Coach Nicole Lantagne Welch said. “I was very proud of my Gauchos for bringing it [Saturday night].”

UCSB held the lead throughout the first set and came out on top, swinging for a .333 hitting percentage to Northridge’s .308. While both teams took 39 total attempts, the Matadors hit for 18 kills compared to UCSB’s 16.

“Northridge has had a lot of success. They’ve been consistently a really good team the past few years and in this season have done well,” Lantagne Welch said. “They’re a strong team, but I think that it was a great opportunity for us to show who we are and what we can do. No matter how tough it got, we were going to dig a little deeper.”

After the half, the two teams battled back and forth until the end, with both hitting for 44 total attempts and a .250 hitting percentage. With 11 ties in the third set, it was only after a long series of rallies that UCSB was able to end the set and match.

Standing out offensively for the Matadors was senior middle blocker Casey Hinger who topped the CSUN team with 13.5 points and 13 kills. Defensively, senior opposite Natalie Allen had 15 digs and two block assists.

Freshman outside hitter Chanel Hoffman had a strong overall game against the Matadors, as she led the team offensively with 12 kills, 15 total points, a .370 hitting percentage, as well as adding her contribution of 11 digs, a solo block and two block assists to the Gaucho defense.

“We came out with a lot more intensity and followed the game plan how we were supposed to,” Hoffman said.

“I just let [Friday] night go and realized we needed to show our Gaucho pride again and bring it back to the Thunderdome,” Grunt said.

In the Gauchos’ second game of the weekend, they fell in three sets to the 49ers, with scores of 25-21, 25-16 and 25-16, keeping Long Beach’s undefeated conference record intact.

“I think we came out playing pretty tentatively from all aspects of the court,” junior libero Shauna Klein said. “We didn’t execute when we had the opportunity.”

The 49ers kept the Gauchos to a .131 total hitting percentage on Friday, stopping their offense from ever hitting above a .250 average in a single set. Though the Gauchos outhit Long Beach 107-96 in total attempts, the 49ers great accuracy allowed the team to shoot for a .406 average hitting percentage.

“We started every game slow and we didn’t have the fire we did on Saturday to pull us back up,” Klein said.

Offensive leader for the 49ers was Chisom Okpala, who had 13 kills of the total 22 shots she took against the Gauchos. The senior middle blocker hit for .545 average and scored 14 of the team’s 58 total points with two additional block assists.

For the Gauchos, junior opposite Britton Taylor had 10 kills on 24 total attempts and a .208 hitting percentage, tallying 11 total points. Hoffman also scored 11 points, with nine kills on her total 24 attempts.

“I just take it one at a time, and see who’s next on the schedule and how can we prepare for that” Lantagne Welch said. “[Saturday] was an important match for us, it was huge for us to come out and play like this. It gives us much more confidence in knowing we can handle anything going forward, and that’s important for our team.”

The Gauchos will leave Santa Barbara to play Hawaii in the Stan Sheriff Center next Sunday.