The Daily Nexus
Water Polo
Gauchos Fall to Stanford
October 20, 2014 at 5:00 am by Edward Moss 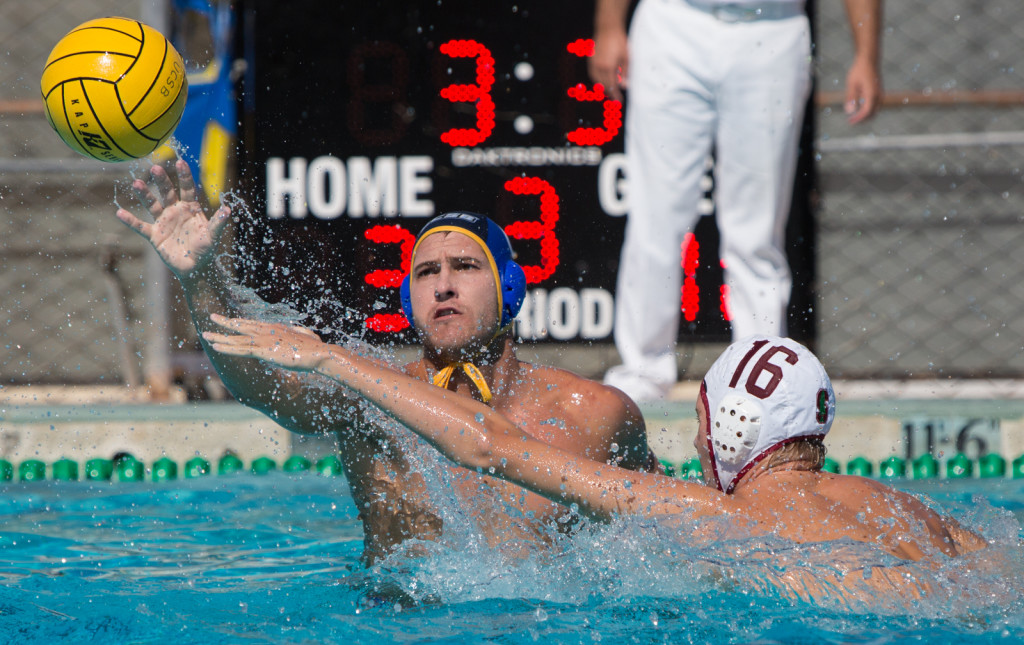 UCSB is still winless in the Mountain Pacific Conference after their defeat against Stanford  on Sunday. Dustin Harris/Daily Nexus

The No. 8 UCSB men’s water polo team suffered a commanding loss at the hands of one of the best teams in the nation, No. 3 Stanford, 13-6 Sunday afternoon.

“My thoughts going into the game were that if we play solid defense, the offense would take care of itself,” junior two-meter Samer Alkateb said. “We had a couple defensive breakdowns here and there and a couple calls didn’t go our way. Next time we play them we’ll be more prepared.”

Stanford started the match with three goals to take a lead it would never relinquish. After counters from junior utility Chase Racich and freshman attacker Shane Hauschild, the first quarter ended with the Cardinal leading by two with the Gauchos needing to step up their game on both the defensive and offensive end if they wanted to have a chance in this match.

The Cardinal took control in the second quarter with four goals to UCSB’s one. Junior driver Bret Bonanni scored two for Stanford while sophomore driver Reid Chase potted two as well. Alkateb scored for the Gauchos on a six-on-five opportunity.

Stanford came out firing in the second half as Bonanni scored his fourth goal of the game in the first minute of the second frame. Stanford added another goal to make the score 10-3. Alkateb countered with his second goal of the game prior to Stanford scoring once more before the end of the third quarter.

“They beat us early pretty good, so we gotta regroup and get on the same page and try to come to the next game ready to play better defense,” Head Coach Wolf Wigo said. “If we can keep the team to under eight goals then we’ve got a pretty good chance of winning.”

Going into the fourth quarter down 11-4, UCSB had little chance of getting back into the game. Stanford added two more goals while the Gauchos got two of their own from senior utility Brendan McElroy and junior attacker Bryan Snyder. Both teams put second and third string players in with the match already decided, and the final score was 13-6.

With its win over USC the day before as well as its victory over UCSB this weekend, Stanford will have a strong chance to take over the No. 1 ranking from USC in the next NCAA polls.

The Cardinal have a stacked team on both offense and defense with four players who also play for the USA National team. That includes Bonanni, who many believe is the best player in the nation.

of weeks and beat them,” Alkateb said. “Then when we come across Stanford at MPSF’s

hopefully it’ll be a closer match.”