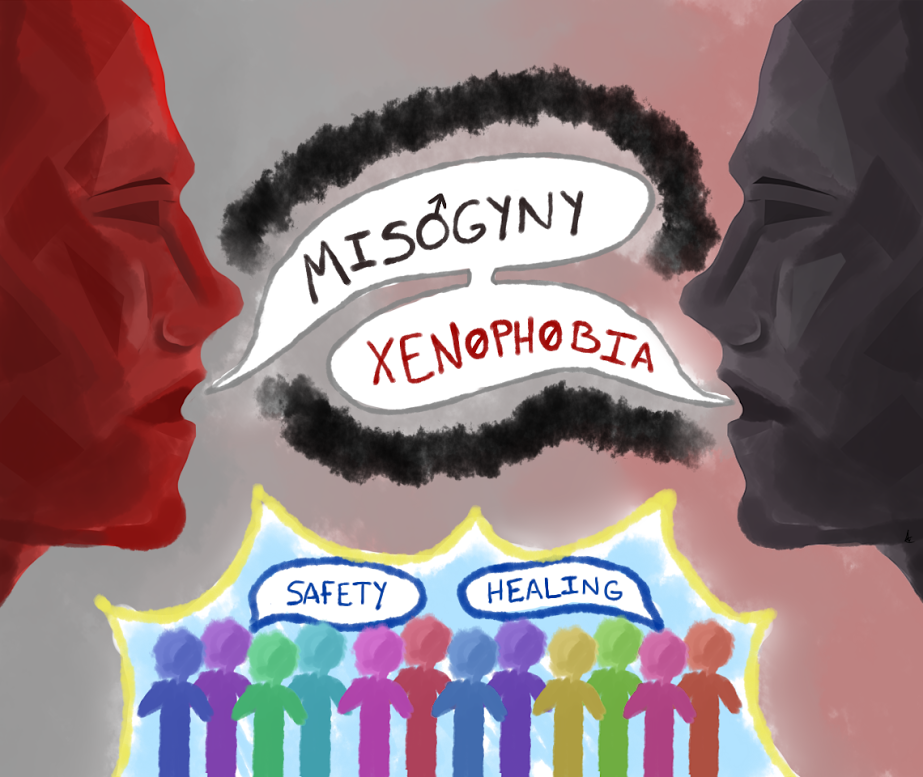 The MultiCultural Center hosted a panel discussion Tuesday evening in the MCC Theater, highlighting cultural, social and racial issues as part of an analysis of the Isla Vista killings that occurred last May.

The event began with the recitation of a poem written by a community member in the aftermath of the tragedy and proceeded into a facilitated panel discussion.
Blake, who initiated the dialogue, said the ideas to be put forth would help to “reorient thinking” about the I.V. tragedy.
Blake immediately delved into the topic of media response to the I.V. shooting and to mass-killings generally, a phenomenon that she said can be understood according to the discourse of tragedy and trauma.

“After the shooting the media was very quick to use the word ‘trauma,’” Blake said. “That’s a term that also suggests we don’t have language to talk about what happened. The events we’ve experienced have been so horrible that they are then unspeakable.”
According to Blake, media coverage of the I.V. shooting and similar incidents often foregoes the opportunity to engage in an analysis of the underlying issues of race and gender in favor of emphasizing the healing process.

“Collective ideas about trauma and tragedy and the ways we tend to deal with human suffering sometimes stand in the place of an analysis,” Blake said. “Mourning is not necessarily incompatible with an examination of the gendered racism that too often produces mass violence, premature loss and tremendous pain and grieving.”

Blake said viral campaigns such as #YesAllWomen and #NotOneMore, which went viral following the shooting, while facilitating important discussions about the issues of violence and misogyny, are prone to overlooking the factor of race.

“Those campaigns offered a more colorblind approach to thinking about issues of misogyny and mass violence,” Blake said. “This colorblind way of thinking challenges our ability to recognize how a lot of these issues that we’re encountering are color-bound, and are produced by color-conscious actions, decisions and intent.”

Blake said community activist work in the aftermath of the tragedy builds upon an extensive history of like-minded endeavors and is a necessary response to such events.

“While it seems like a harsh approach to tragedy, we have a very long history of extraordinary history around gendered racism and violence,” Blake said. “Collective knowledge [about] these long histories of struggle allows us to have a more robust and more critical discussion and conversation.”
Johnson spoke next, explaining the concept of a disaster narrative typical in film. He said the disaster narrative tends to homogenize victims of a tragedy and seek an equal outcome for all those afflicted.

“It struck me in the days after what happened in Isla Vista that this was another disaster moment. Disaster narratives often serve to unite us,” Johnson said. “One of the things that has become erased is the unequal outcomes that have happened in wake of the Isla Vista tragedy.”

According to Johnson, the heightened state of surveillance in I.V. following the shooting, while ostensibly serving the benefit of all residents, undermines racial minorities.

“What is going to be the effect of that surveillance on people of color who are already suffering in Isla Vista and Goleta?” Johnson said. “Disaster narratives obscure power, they obscure the unequal outcomes of providing safety.”

Johnson said there is a second, ongoing layer of struggle in I.V. that involves the struggle of underprivileged minorities to make a living amongst an affluent academic community.

“There are many people who used to live in Isla Vista and work on campus that have been forced out,” Johnson said. “All of this takes place on a landscape that doesn’t register visibly for those of us who are only aware of the trauma that’s been inflicted upon the privileged students of UCSB.”

According to Rios, devising a volunteer force of caregivers to monitor I.V. is a necessary remedy to the issues it faces on a cultural and structural level, as well as a viable alternative to increased law enforcement presence.

“We don’t need more policing. We need more caregiving,” Rios said. “Just imagine a collective of people going out there into IV at night. It’s when you expand and increase [law enforcement] at such a vast number that these officers aren’t trained to be caregivers.”

Harmony Karimi, a third-year English major, said she is concerned over a lack of unity in grappling with communal challenges that transcend physical security.
“I don’t think people realize there is potential to come together,” Karimi said. “Safety is not just safety of physical body. We also need to mentally feel safe and invested here.”

According to Zaveeni Khan-Marcus, director of the MCC, forums for community members to communicate with each other about issues such as these facilitate growth and change.

“[Panel discussions] stir up intellectual discourse. It may not be conversational. It could be change in a person,” Khan-Marcus said. “You have to realize certain misconceptions you have, and then you take it to your own circles. If you’re moved enough, you’re going to talk about it.”

A version of this story appeared on page 1 of the Thursday,  October 16, 2014 print edition of the Daily Nexus.