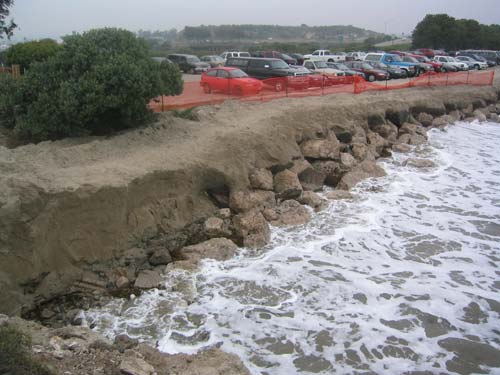 The project aims to keep rock revetments installed at Goleta Beach, shown here, in an effort to prevent natural erosion of the beach. Photo courtesy of edcnet.org

The Goleta Beach Managed Retreat Project proposal, which aims to retain rock revetments installed in 2005, was resubmitted to the California Coastal Commission (CCC) on Sept. 29 for further review after initially failing to be accepted on April 29 due to the CCC’s request for additional information.

Revetments are sloping structures that are placed on banks or in order to absorb the energy of incoming water. The Santa Barbara County Board of Supervisors previously voted unanimously on March 18 to retain the current rock revetment, over other suggested replacements, such as buried sandbags, cobbles or equalizing modules. The revetments were initially installed in 2005 after the CCC issued an emergency permit to prevent intense winter storms from causing further sand loss and erosion.

According to the project report, the decision to retain the existing revetments is based on the insignificance of adverse impacts to natural coastal processes at Goleta Beach County Park in the near future. The report also states that no additional physical changes would be made to Goleta Beach as part of the revetment retention project and no additional shoreline protection would be installed.

Operations Manager for Santa Barbara County Parks South Jeff Lindgren said that the removal of the current revetments and implementation of new measures against erosion would be too great.

“If you balance the proposed benefits of those projects with the disruption to the beach, having to tear everything out and install any kind of new apparatus, then leaving the rocks that have been there for many years is a pretty sound way to proceed,” Lindgren said.

Supervising planner in the Development Review South Division Anne Almy said she agrees that the decision was made due to its “lack of impact on the beach.”

“These particular rocks are located such that they will not fix the shoreline and they will not adversely affect sand supply down current,” Almy said.

According to Almy, the management of Goleta Beach is “an issue of great community concern and interest,” due to the many services it provides to the surrounding community.

“Goleta Beach receives one and a half million visitors a year,” Almy said. “Parking is free, there are picnic tables, a play area for children and rentals available for kayaking and boogie boarding. So there are a lot of amenities there that serve a wide range of the public and a long history of enjoyment at the beach, which really speaks to its importance.”

Professor of Applied Marine and Fisheries Ecology at the Bren School of Environmental Science and Management Hunter Lenihan said that while the beach may offer a wide variety of recreational opportunities, the long-term effects on the beach’s ecological system should be taken into account.

“There are all these people that want to do different activities on the beach, but we have to have balance,” Lenihan said. “We have to manage all of our resources along the coast and understand the impacts of different types of management on resources.”

Lenihan also said there has been an increased need for county management of Goleta Beach in the past years because of a storm that removed a lot of the natural elements, which had previously prevented erosion.

“There used to be a lot of cobble and rocky area off shore that had a big kelp forest that protected the beach from wave energy,” Lenihan said. “So there wasn’t as much scour and movement of sand before. But a storm came in and took up all that material and now there is no longer a kelp forest and that’s why they’re having to manage that beach more actively than in the past.”

Lindgren said now that there is a better understanding of the future of Goleta Beach, the county has plans for new changes, including the remodeling of existing facilities.

“Now we can proceed with much needed improvements in the park,” Lindgren said. “We are going to remodel one of the restrooms, that’s long overdue, and clean up a lot of the landscaping. We’ll also be repaving the parking lot areas to better serve the public. All those sorts of things we have not been able to address because there were so many questions with what was going to happen with Goleta Beach.”

“This is honestly where I grew up,” Wilgus said. “I’ve spent a lot of years fishing and surfing and playing in the water since I was an infant, so it’s my home.”

The east parking lot at Goleta Beach will be closed for repaving beginning Monday, Oct. 20. It is estimated that the lot will be reopened to visitors on the morning of Wednesday, Oct. 22.

This article is confusing. Are we fighting nature or trying to save it? We all want to have access to beach facilities, but not at the cost of creating a domino effect in the waterways and beaches down the coast. I’m no environmental sciences major, but it seems to me there was a beach long before we got there and that more construction will probably not help these kelp forests keep a hold on the soil.