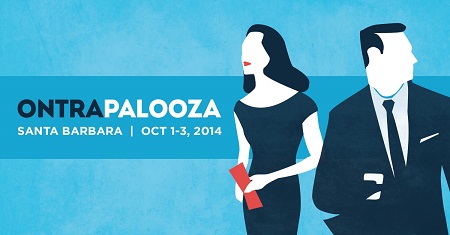 The three-day conference, sponsored by the technology company Ontraport, included speeches by prominent business leaders, journalists and best-selling authors, as well as demonstrations of new technology to streamline business management. Hundreds of business owners and aspiring entrepreneurs from around the world attended the $599 event, which provided an extensive array of accomplished speakers as well as evening parties on the rooftop of the Canary Hotel and the Wine Cask, as well as dinner at the Ontraport Campus overlooking Santa Barbara.

In the keynote speech that kicked-off the conference in the Lobero Theatre, Ray said it was essential that entrepreneurs have a business plan evoking passion and pride in employees and customers.

“If you’re going to devote yourself to a vision that’s anything less than totally inspiring, then you can expect to be surrounded by people who are willing to do the same,” Ray said. “Fortunately, in this room, we’re not willing to submit to that kind of nonsense.”

Ray also said it is critical for individuals to have a business goal that creates a positive change and encourages other people to get involved and provide support.

“The fulfillment of your vision needs to make a worthwhile difference in the world,” Ray said.

Dozens of UCSB students and alumni attended and staffed Ontrapalooza’s numerous events as interns or employees of Ontraport.

According to Ray, his company has benefitted greatly from its close relationship with the university.

“We have a lot of UCSB students that work for us,” Ray said. “That creates a strong connection to the community and a great positive feedback loop for us.”

Recent alumna and former communication major Andrea Webber, who works as the media coordinator for the event, said students from the university make up a significant portion of their employees.

“We hire a lot of UCSB students, especially in our customer support area,” Webber said. “A lot of people go through our internship program and get hired, probably at least a third.”

Julia Anghel, a recent alumna and former global studies major who was a student in the Technology Management Program, said Ontraport’s internship program is superior to any other business she has experienced working for.

“I think it’s the best first real job I could have ever asked for,” Anghel said. “Even being an intern I was already learning so much more than I had at any other internship I had. It’s so much more hands on and the company culture is great.”

Ontraport content writer and UCSB Ph.D. student Katlyn Gangi said there was a critical distinction to make between simply trying to sell a product to people and trying to establish the significance of your business and why it matters.

“Are you just communicating what you do for the world, like ‘hey we sell software, do you need software?’” Gangi said. “Or are you actually communicating to the world your greater purpose, why you exist and what gets you out of bed in the morning?”