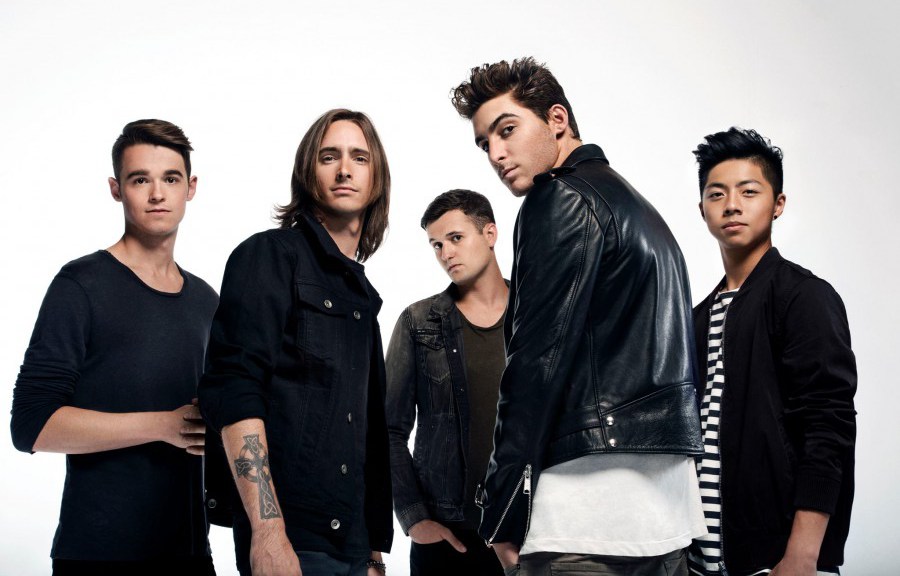 Photo Courtesy of North of Nine.

Up-and-coming band North of Nine is set to play SOhO as part of the New Noise Music Conference & Festival this Sunday. Lead singer Jackson Guthy — who happens to be A.S. President Ali Guthy’s musically inclined little brother — has opened for One Direction, Big Time Rush, Victoria Jackson, Cher Lloyd, Fifth Harmony, Emblem3 and 5 Seconds of Summer. Currently he’s signed to a label under Randy Jackson, and has become the American Idol judge’s newest prodigy. Artsweek reporter Heeba Kaleem sat down with Guthy and guitarist Michael O’Grady to get the scoop on the band’s origins, hair obsessions and what it’s like to work under a manager like Randy Jackson.

Q: How did you guys meet?

Jackson: I met Michael on Tinder.

Michael: It was love at first sight.

Jackson: It was love at first swipe. Get it? I went on tour with Rob, my drummer, about a year and a half ago. After I got done with stuff I met up with Ron [again] and we were playing music with a bunch of different musicians. We were on set [with] this group of five guys and we all clicked really well together as a band, but also as friends. Now we just started this new project called North of Nine that we’re super stoked about.

Q: What inspired you guys into music in the first place?

M: Well, I mean for me, I’ve been playing music my whole life. I started taking piano lessons since I was a little kid, like five years old.

J: I started piano when I was four.

J: I got into music … I got a love and passion for music my whole life so I started playing when I was four. And then I’ve had the courtesy of being able to go out on the road a lot … and gain a lot of experiences. So it’s really cool now to be doing this project. It’s a lot different from the stuff I was doing.

M: And I’ve been noticing, too, for us as a band, as North of Nine, [it] was a little gig, our first set rehearsal. I don’t think anybody really kind of expected it to go as well as it did because we ended up [with] — where was it Jackson — five, six new songs?

J: Yeah, [all] made up on the first day. You know that it’s different when something clicks like that.

J: Like that fast and that well, there’s something different and we were able to do that.

Q: What can we expect from your debut album? I know “We Ride” is a ballad but is your entire album like that?

J: Every guy in the band comes from a different place. So Rob comes from Michigan, our drummer, Michael, comes from Ohio, Nolan’s from Kansas, I’m from here and then Edison, who’s our bass player, comes from Hong Kong. So all of our music styles blend in. There’s a bit of a draw from places where we’re from, I guess. But it’s definitely more up-tempo, like Rockfish with a little bit of a pop element. I’d say more modern rock and alternative, I guess.

M: Which is a good thing for us because when you get together with musicians and you’re trying to do original material and if we all have different backgrounds, it helps blend and twist different styles to hopefully come up with something more original.

J: I just wanted to say that Mike’s hair plays a big role.

J: I write most of my songs on Mike’s hair.

M: Yeah, so if you wanna look up the meaning of our songs, it’s just coming down to the hair.

Q: Why did you guys decide to call yourselves North of Nine?

J: It comes down to my mom, a lot. Cause when I was born … in 1996, she went to an astrologer and supposedly I was born in the year where all of the nine planets were aligned. My mom’s super into that, so she told me that story when I was young. But then she also has always said in life you’re going to have a lot of challenges and a lot of things that you have to overcome. It’s really important to set your true North — like, the thing you’re striving for. It definitely spawned a lot from my mom and I think it’s a humbling title and something to look forward to in my life.

M: I think that’s good too because it can kinda go hand in hand from your previous question of why we do this; ‘cause it’s something that’s true to us and we stick with it. We go through the bad times and the good times no matter what.

Q: This is for Jackson. What’s it like to be a Randy Jackson discovery and to go into the music business at such a young age?

J: I’ve done music my whole life. I‘ve had the blessing to be able to work with a lot of the amazing, amazing people. You get a lot of stuff told along the way. People are like, this is your time. I remember signing with Universal and everyone telling me, oh, this is your time, everything is happening the right way. But you know, I never really felt fully comfortable in the situation … so I’m super stoked to be with Randy. I think it’s really awesome that Randy and I went from working on my solo project to working on North of Nine, which has definitely hit a lot more at home for me, which is why I feel the music is more real for me. It’s just something that comes out of me. This is the music that pours out of me when I sit at the piano. It’s humbling to be able to do that and Randy is amazing … he let me be my artistic side.

Q: You are also our school’s president’s brother. Tell me about that.

J: You know it’s weird like everything else. She just comes into the room [and] her secret service just punches me and moves me out of the way. It’s crazy ’cause she’s like my sister, but I can’t be normal ’cause she’s the president.

Me and my sister have a really close relationship. She’s one of my best friends in the world, there’s no one I love more than my sister. She’s an amazing person and she deserves to be doing all of the awesome things she is. We’re super proud of her and hopefully she’s super proud of me.

J: Yeah, we’re gonna be playing “We Ride.” But like we said, we have a lot of new music that people are gonna respond to so it’s gonna be cool coming to New Noise and seeing in person how people react.

M: It’s great exposure for us as a new band as well. As an up-and-coming and fresh [band], we’re really excited to have an opportunity like that.

North of Nine will play SOhO this Sunday, Oct. 19 as part of the New Noise Music Conference & Festival at 7 p.m. For more information on the band, check out northofnineband.com/