The Daily Nexus
Volleyball
Gauchos Split Pair of Road Games
October 13, 2014 at 5:00 am by Sarah Stigers 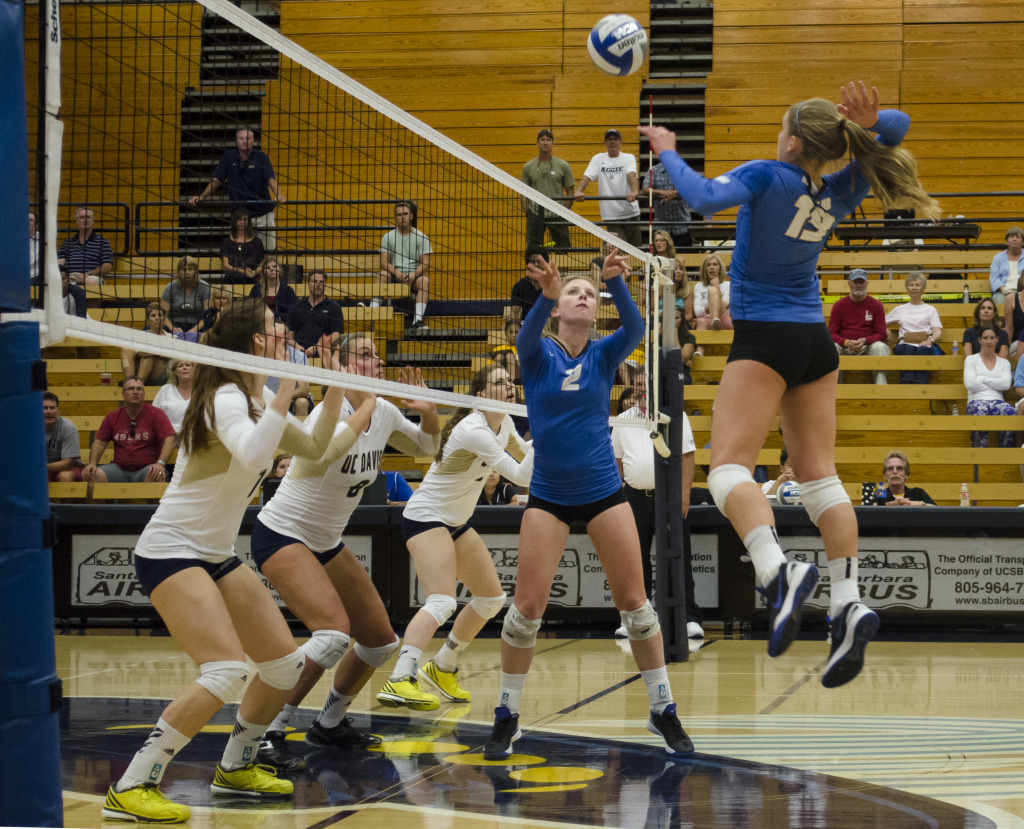 The UCSB women’s volleyball team went 1-1 this weekend with a 3-2 loss at UC Irvine on Friday and a 3-1 win at Cal State Fullerton on Saturday.

The Gauchos advance their record to 3-2 Big West and 8-8 overall. They ended the weekend on a high note after the win against the now 0-5 Big West, 6-12 overall Titans. Irvine improved to 2-3 Big West and 12-7 overall.

“We are going to take our loss to Irvine to fuel preparation for this weekend because we have two huge games,” sophomore outside hitter Ali Spindt said. “Long Beach and Northridge are some of the top two teams in our conference. It’s exciting, but we have to really focus and work hard in practice.”

It was a close match through the first two sets, with the Gauchos winning 25-23 and 25-20 respectively against CSUF. Falling in the third 25-17, the team rallied back to win the fourth set, 25-16, and the match.

Both teams were seemingly evenly matched early on, each tallying 16 kills in the first set. UCSB hit for a .364 average and Fullerton for .367 through two. However, Fullerton had five errors to UCSB’s four, as well as three less total attempts.

Coming off of the first set’s win, the Gauchos carried their momentum into the second as they held the Titans to a .047 hitting percentage while hitting for a .289 average themselves. UCSB cut its errors in half to two while Fullerton’s doubled to 10. However, in the third set, Fullerton retaliated, holding the Gauchos to only eight kills in a 25-17 win.

The Gauchos came back in the fourth to finish the match strong with 15 kills and 37 total attempts.

“On Saturday we played very well,” junior outside hitter Ali Barbeau said. “We were firing on all cylinders. The middle played really well and we ended up pulling it out.”

While Barbeau led a solid Santa Barbara offense on Saturday with 18 kills on 47 total attempts, the team also had a huge defensive outing.

“We prepared well all week to play against them and we got on a roll and got going,” Spindt said. “People were pumped up and making great plays. Everything came together.”

For the Titans, sophomore libero McKenna Painton and freshman outside hitter/middle blocker Niki Withers led offensively with 14 and 16 kills, respectively.

On the other side of UCSB’s split weekend was its 3-2, fifth-set decision loss to UC Irvine. The Gauchos battled Irvine back and forth throughout the five sets, but ultimately fell to the Anteaters.

“Friday night we should have won,” Barbeau said. “[Irvine’s] defense was outstanding and we just couldn’t offensively put a ball away. We couldn’t execute.”

The Gauchos beat Irvine in the first set 25-23. With an accurate, offensive edge behind the ball, UCSB hit for a .324 average compared to Irvine’s .256.

Fighting back in the second set, Irvine rallied to win 25-23, totaling 17 kills to UCSB’s nine. Irvine kept this momentum going through the third set, as the team held the Gauchos to eight kills and 32 total attempts, while still hitting for 16 kills. The Anteaters had only two errors on their way to a 25-14 win.

Tides changed back towards the Gauchos direction in the fourth set, as the team came back for a 25-22 win, hitting for a .268 average and holding Irvine to 11 kills.

However, as the match led into the fifth set, Irvine regained the lead on its home court, ending the match on a 15-9 win.

Offensively for the Gauchos, Barbeau, and junior opposite Jaylen Villanueva each had 14 overall kills in the match. Defensively, Spindt had 19 of the team’s 76 total digs, 12 of which also went to senior setter Ali Santi.

“[The season] is going pretty well. We are still trying to find that consistency against all the teams that we play, but we’re on the up,” Spindt said.

UCSB return home to play in the Thunderdome this upcoming weekend to play Long Beach State on Friday at 7 p.m. and Cal State Northridge on Saturday also at 7 p.m.