The Daily Nexus
Sports
Gauchos’ Unbeaten Streak Comes to an End
October 13, 2014 at 5:00 am by Michael Jorgenson 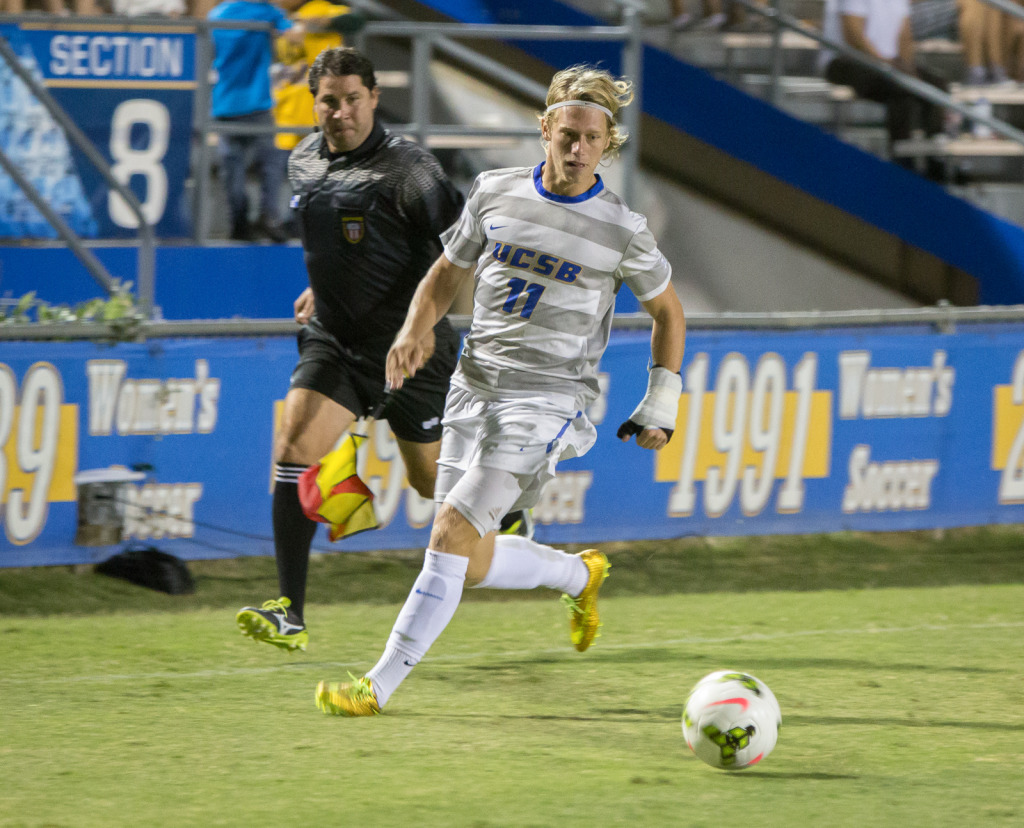 Despite going 2-0 against a pair of Big West powerhouses last weekend, the UCSB men’s soccer team couldn’t keep its hot start going as it lost 2-0 to Cal State Fullerton on Thursday before drawing 1-1 with UC Riverside on Saturday.

Although the Highlanders came into the game an outmatched team compared to the overall talent of the Gauchos, they found success with a gameplan centered around sending long balls into the box and doing whatever they could to keep UCSB from finding any sort of rhythm.

“It’s tough because the two teams we played against were not necessarily interested in trapping and passing,” Vom Steeg said. “They were more interested in bringing in seven, eight, nine subs and just basically throwing balls in the box and trying to get something from nothing.”

The Highlanders got off to a great start when in the 17th minute, Titan senior defender Otis Earle played a ball into the box that found senior forward Ulises Mosqueda for a header past freshman goalkeeper Brandon Berke, giving Riverside a 1-0 lead.

“We don’t want a game in which both teams just kick it back and forth. If we get into that kind of game then it takes away from what we do well,” Vom Steeg said. “We’re just having to learn the difference between playing at Harder Stadium and playing on the road. Our players just have to play a little bit quicker and work a little bit harder in terms of committing to try and keep the ball and move it.”

The Gauchos were able to end a long scoring drought in the 53rd minute when sophomore midfielder Ismaila Jome sent in a cross that found senior defender Kevin Garcia-Lopez for a first-touch shot. Lopez was able to fire the ball past junior goalkeeper Ashkan Khosravi to give Santa Barbara its first goal in over three halves and its first of the weekend.

A second yellow card given to freshman defender Jeff Quezada in the 74th minute put the Gauchos at a disadvantage down one man, but things got even worse in the 85th minute when junior holding midfielder Dylan Murphy was given a straight red.

Heading into overtime two men down, UCSB was somehow able to stave off the Riverside offense despite being outshot 8-1 in the 25 minutes after the second red card was given. After two scoreless extra periods, the game ended in a 1-1 tie.

“Given what happened on Thursday, I was very happy that we did have a real good response under difficult circumstances on Saturday,” Vom Steeg said. “Given that it was nine versus eleven for about thirty minutes it was pretty remarkable to be honest. We would not have tied on Saturday being two men down if we didn’t learn something from Thursday night.”

In Thursday’s game against Fullerton, a frustrated Gauchos team couldn’t find a way to get on the board with only two shots on goal out of ten attempts. The game got off to a slow start, especially after being delayed 45 minutes due to Fullerton’s women’s soccer team going into double overtime, and the Gauchos failed to record a shot on goal in the first half.

The Titans finally got things going with a goal in the 42nd minute. A long throw-in by forward Nigel Patterson got knocked around in the box before freshman midfielder Robert Coronado was able to control it and chip it past Berke to put his team up by one.

With UCSB pushing players up the field in search of a late equalizer, the Gauchos found themselves vulnerable to a counterattack. The Titans capitalized on this in the 82nd minute when a counter led to a deep shot by senior midfielder Spencer Johnson. An outnumbered UCSB defense failed to reach the ball after it came off the post, resulting in an easy rebound goal by sophomore defender Mitchell Bell.

“Unfortunately, they had success against us on Thursday because we did not play well at all,” Vom Steeg said. “You have to ask yourself, ‘Is the success about the way they were playing or is the success about how we didn’t handle what they were doing very well?’ and I actually think it’s a combination of both. Fullerton didn’t have a lot of interest in making that a soccer game and we didn’t really respond well to that. ”

Sophomore midfielder Nick DePuy led UCSB with five out of the team’s ten shots in the game. The disappointing loss marks the first time the Gauchos have lost in the conference since 2012, ending their  impressive 12-game unbeaten streak. The loss was also Berke’s first of the season after going 4-0 in his first four career starts.

“We know what teams are going to try to do to us,” Vom Steeg said. “They can’t really do what they want to do at Harder Stadium, but we only play half our games there. I’m hoping that we will go back on Tuesday night to putting the ball on the ground and just playing the way we want to play and moving in that direction again.

UCSB returns to action on Tuesday for a non-conference game against Loyola Marymount.