The Daily Nexus
News
IVFP Discusses Halloween With Residents
October 9, 2014 at 5:00 am by Erica Loera 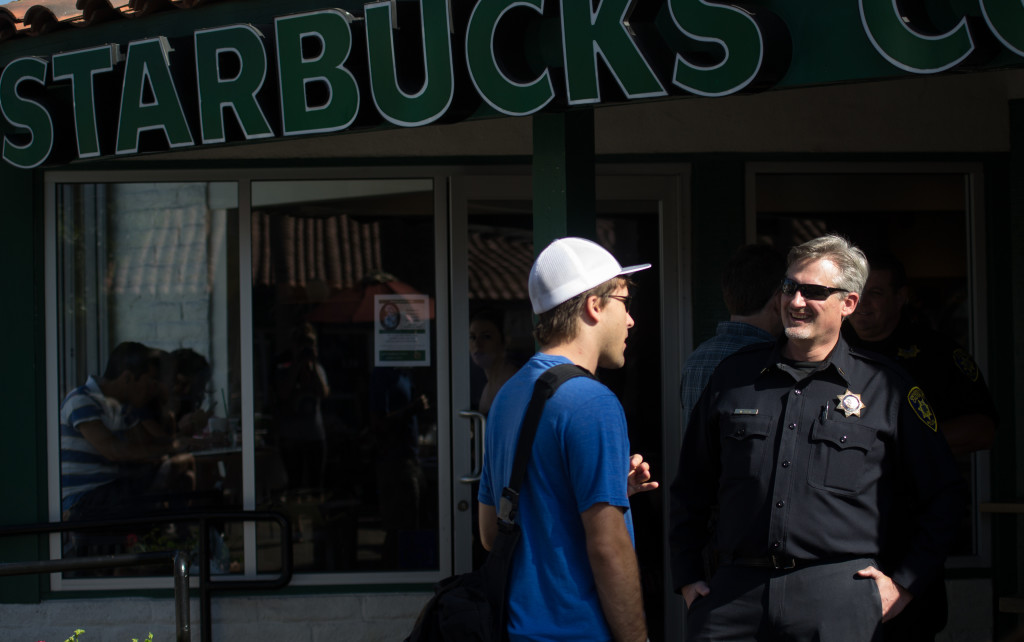 “Coffee with a Cop” is held every couple of months and is designed to allow students and I.V. residents to discuss their concerns with IVFP officers and deputies. The officers also discuss with students how to stay safe in I.V. and what to expect during Halloween.

According to IVFP Lieutenant Brad McVay, the event is a way to initiate dialogue between students and law enforcement officials, as officers are eager to help the community but do not always have time to do so.

“Sometimes we can not do that in the field, especially on a busy Friday or Saturday night, but in general we are available for you and people just don’t realize that,” McVay said. “Without input from the community, [knowing] what’s important or what are your concerns, we don’t know how to direct our resources.”

UC Police Officer Detective Dawn Arviso said students must take some responsibility in order to stay safe in I.V. and emphasized that the police have a priority to keep Isla Vistans safe.

“We want the students to enjoy themselves,” Arviso said. “We recognize this is a time in their life to go out and enjoy life because they’re on their own for the first time, so we’re not trying to ruin anyone’s time, but … at the end of the day, we have to enforce laws and make sure people are safe and a lot of the time kids view that as ruining their good time.”

Third-year biology major Bonnie Bierbaum said she believes such events helps erase the bad reputation students often associate with police and thus remind them that cops are working to protect them.

“I didn’t approach any of [the cops], they actually came to me and we just started talking,” Bierbaum said. “It’s nice seeing them in this environment, just casually talking to them and being able to ask them questions.”

According to McVay, there will be a significant increase in enforcement efforts this year to ensure the safety of students and I.V. residents during Halloween, which typically draws a large number of people to I.V. for the weekend.

“We’ve partnered with UCPD, who are bringing in a lot of officers, and we’re going to have the maximum deployment of all of our officers as well, not just for the safety aspect but so that we can ensure that everyone is having a good time,” McVay said. “The most important thing students can do is stay informed. We want people to enjoy themselves in a safe environment.”

According to Detective Rory Sheehey, a majority of crimes over Halloween weekend are committed by visitors, not UCSB students. She encouraged residents not to invite outsiders on Halloween.

“I would try not to invite any outside friends here for the parties, just have fun with your friends here. If anything happens, you will take responsibility for your friend, because you put yourself in that situation,” Sheehey said. “Hopefully this year we can still have a good time, just not in excess.”

Second-year history of public policy major Ashcon Minoiefar said he thought the officers should concentrate on watching people on the street rather than those partying inside a house.

“Breaking up a party isn’t necessarily going to stop [a crime], because then the officers just push people all out on the street,” Minoiefar said. “I have no problem with the laws set up for Halloween, I understand what they’re doing. I think it’s just they don’t understand that sometimes when they’re trying to help, they could make the situation worse.”

A version of this story appeared on page 1 of Thursday, October 9, 2014’s print edition of the Daily Nexus.