The Daily Nexus
News
A.S. Senate Convenes for First Meeting of Fall Quarter
October 9, 2014 at 5:00 am by David Jackson 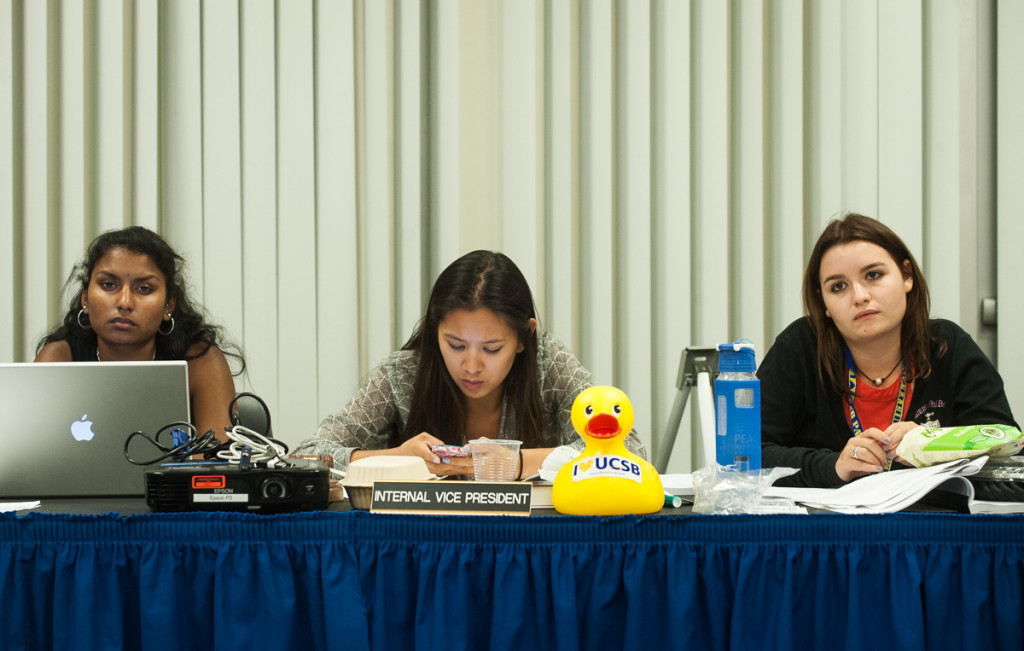 Associated Students Internal Vice President Angela Lau, center, and two Senators at the first meeting Wednesday night. The Senate spoke with UCPD Chief Dustin Olson about increased police patrols on the weekends and the role of police in I.V., among other topics. Kenneth Song/Daily Nexus.

The Associated Students Senate held their first meeting of the academic year this Wednesday in the Flying A room at the UCen.

The meeting focused on discussions with University of California Police Department representatives, complaints of a lack of support for student organizations by the Rec Cen and an appeal for a new electoral process for Associated Students Senate elections.

UCPD Chief of Police Dustin Olson informed the Senate that there would be increased police patrols on the weekends in Isla Vista and on campus.

“A couple things that you might have noticed or heard about that we have underway are increased police patrols over the weekend, particularly on campus and in Isla Vista Thursday nights, Friday nights and Saturday nights,” Olson said. “We’re really trying to make sure the community feels safe and is safe.”

Olson also said additional precautions would be taken during Halloween weekend, such as the presence of up to four times as many UCPD officers and drunk driving checkpoints.

“We’re pulling a lot more UC officers into the operation than we’ve had in years past,” Olson said. “Say like, last year and years before that there was maybe like 25. This year we’re bringing in up to 100. These are UC officers from other UC campuses.”

Senator and fourth-year mechanical engineering major Jonathan Rothschild asked if students were required to present identification to officers when on their own driveways and property. Olson responded by saying that students were not obligated to do so and would not be arrested if officers couldn’t prove that they were under age.

“I’m not going tell you that you have to,” Olson said, “they’re not going to arrest you for being underage unless they know you’re underage.”

Olson said UCPD was not looking to make students miserable or refrain from doing anything fun, but rather to simply behave in a responsible manner.

“I’m not here to tell you that I don’t want you to have fun or do things that UCSB and college affords you to do, that’s just not right,” Olson said. “What we want you to do is be safe and make good decisions and be part of that success. I hope you know that and feel that when you see us out there … we’re not here to make your lives hard.”

Later in the meeting, members of the UCSB Cotillion Dance Club voiced complaints that the Rec Cen had taken action to make their club and its 100 members unable to practice.

Fourth-year biology major and Cotillion Dance Club member Letitia Mueller said actions taken by the Rec Cen to raise the price of renting rooms, thus making others unavailable altogether, has forced students to resort to practicing in unsafe locations such as parking lots.

“This is dangerous. This is a liability,” Mueller said. “People are break-dancing in Lot 22. That’s so scary. People can break their necks, and it’s not okay. We need resource creation. We need a space to practice. There are no spaces for independent dance groups.”

[Correction: This article previously incorrectly stated that the UCen Governance Board had implemented policies affecting the Cotillion Dance Club. That is incorrect. This department discussed in the Senate meeting was actually the Rec Cen.]

A version of this story appeared on page 5 of Thursday, October 9, 2014’s print edition of the Daily Nexus.