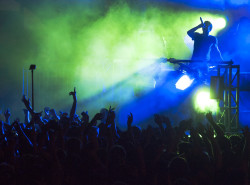 Justin Blau, better known as 3LAU (pronounced Blau), was a smash hit at Saturday night’s Welcome Back Concert put on by A.S. Program Board. Originally from Syosset, New York, Blau grew up in an artistic family and learned how to play piano and guitar, as well as sing, at a young age. At the age of thirteen, his family made the move to Las Vegas, Nevada, where he is now based. On a trip to Sweden in 2011 he discovered electronic dance music.  Shortly afterwards, he began uploading his mixes and mashups to YouTube under the professional name 3LAU.

Hundreds of students gathered at Storke Plaza awaiting 3LAU, but before the main star of night appeared, there was an opening performance by up-and-coming DJ Beni Haze. He was met with mostly good reception from the crowd, although some in the crowd complained of his abrupt change in songs. He played hits like “Knock You Out” by Bingo Players and “#Selfie” by The Chainsmokers — while he took a selfie. People were crowd surfing and one unfortunate girl was almost dropped. He also took the opportunity to introduce a new track to the crowd. Towards the end of his performance the crowd began to soar as more and more students filled Storke Plaza.

After much anticipation, 3LAU hit the stage and the crowd met him with pent-up enthusiasm. As a result, a wave formulated from concert-goers pushing back and forth in the crowd, which resulted in people being knocked down (including myself) and security having to pull people out from the front near the stage because they were being pushed up against the fence.

Before beginning his performance, 3LAU spoke to the crowd, saying that one of his good friends had attended UCSB. He then introduced his cameraman and told a story about him. While at Indiana University, his cameraman got so drunk that he had a blood alcohol content of .33 and fell of a cliff. 3LAU then challenged Storke Plaza to get crazier than his camera man. Although the concert-goers fell short of the challenge that 3LAU put them up to, it still got pretty wild.

From his first track, 3LAU had the students with their hands in the air and jumping. There was a lot of interaction with the crowd and it responded well to him. He played many popular tracks that got Storke Plaza going, such as “Listen To Your Heart,” “Letting Go,” “I Need Your Love” and even Blink 182’s “All The Small Things,” which everyone  recited the words to. He also played his smash hit “How You Love Me,” which had everyone dancing and cheering. A mini helicopter flew up above the crowd with flashing lights and one could assume a camera, capturing the view from below.

As it happened, Saturday night was also the birthday of 3LAU’s girlfriend Cassie. He dedicated a mix of Maroon 5’s “The Path That Leads to You” to Cassie and asked the audience to wish her a happy birthday, which they did.

Practically all of Storke Plaza was full of sweating, dancing college students while some looked on from the sides of the plaza and the stairs. Towards the back of the plaza, members of the campus group Ambience showed off their mad skills and gave free light shows to students. Two shirtless male students climbed and danced their way up one of the palm trees in the plaza. The audience requested an encore and 3LAU played one last track. At the end of it all, the students in the crowd could be heard chanting “U-C-S-B” before they dispersed.