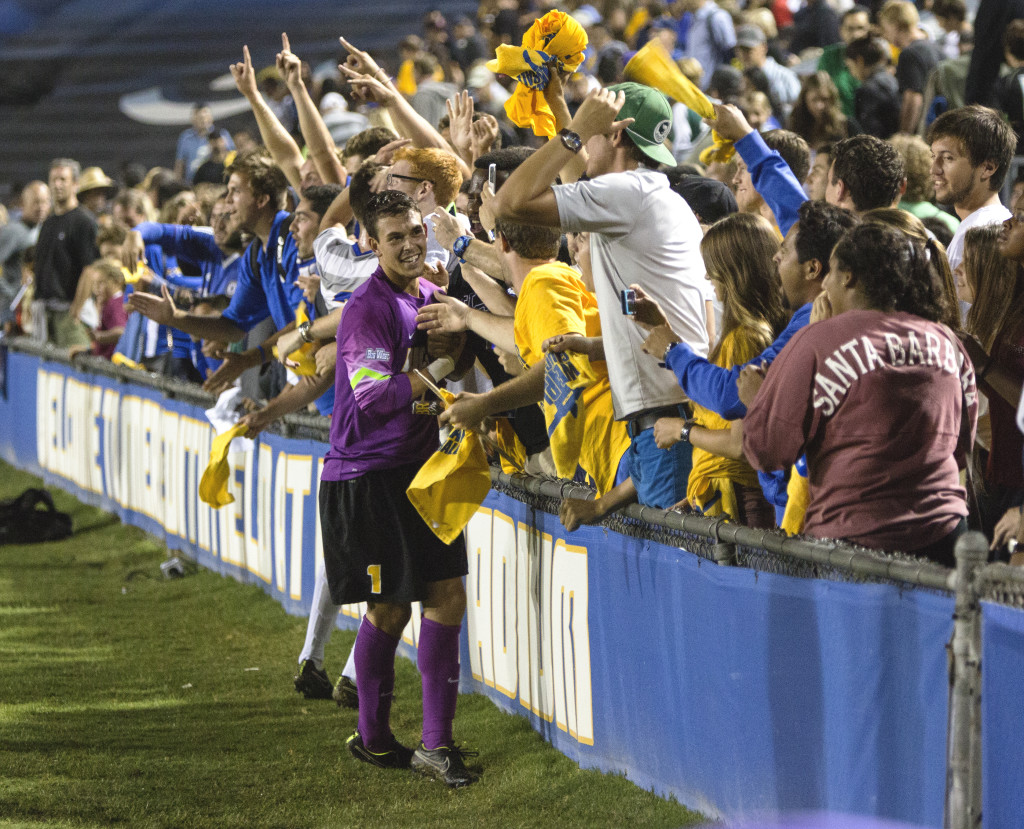 UCSB freshman goalie Brandon Burke is warmly greeted by fans after the Gauchos shut out No. 3 UC Irvine 1-0 to extend their win streak to four. Berke made five saves against the Anteaters in the match. (Dustin Harris/Daily Nexus)

After going undefeated in Big West regular season games last year, the UCSB men’s soccer continued its winning ways with a 1-0 shutout victory over No. 3 UC Irvine and a 2-1 win over CSUN to kick off the 2014 conference season this past weekend.

“I can’t think of a better way to finish the first week of conference,” Head Coach Tim Vom Steeg said. “We’ve been playing generally pretty well so far this season, but now it’s about getting results. We’ve been successful in that area recently.”

Irvine entered Harder Stadium an extremely confident bunch after going undefeated through its first ten games of the season, but as Vom Steeg jokingly predicted the weekend before, the Anteaters’ first loss would in fact come on Saturday in dramatic fashion.

After both teams went scoreless through 89 minutes, UCSB was finally able to find the breakthrough. With just seconds left before overtime, a long ball aimed towards senior forward Reed McKenna took UCI junior goalkeeper Michael Breslin off his line to clear the ball under heavy pressure.

Luckily for the Gauchos, the clearance landed right at forward Nick DePuy’s feet. The sophomore was able to control the ball before taking a touch to his left and firing a deep strike into the top left corner of the net, earning his team a shocking victory.

“As soon as I hit it, I knew it was going to be a goal,” DePuy said. “I saw the keeper off his line and decided to take a shot at it. It turned out to be a pretty good move.”

Goalkeeper Brandon Berke made five saves in the game, but none were more important than in the 69th minute when the Anteaters’ senior forward/midfielder Dennis Martinez found himself one-on-one with the freshman keeper. Berke smothered the chance, helping preserve the Gauchos’ second shutout of the season and bringing his record to 4-0 in starts this season.

It was also the fourth game since Vom Steeg moved DePuy to starting forward, a move that seems to have paid off as UCSB has won every game since. 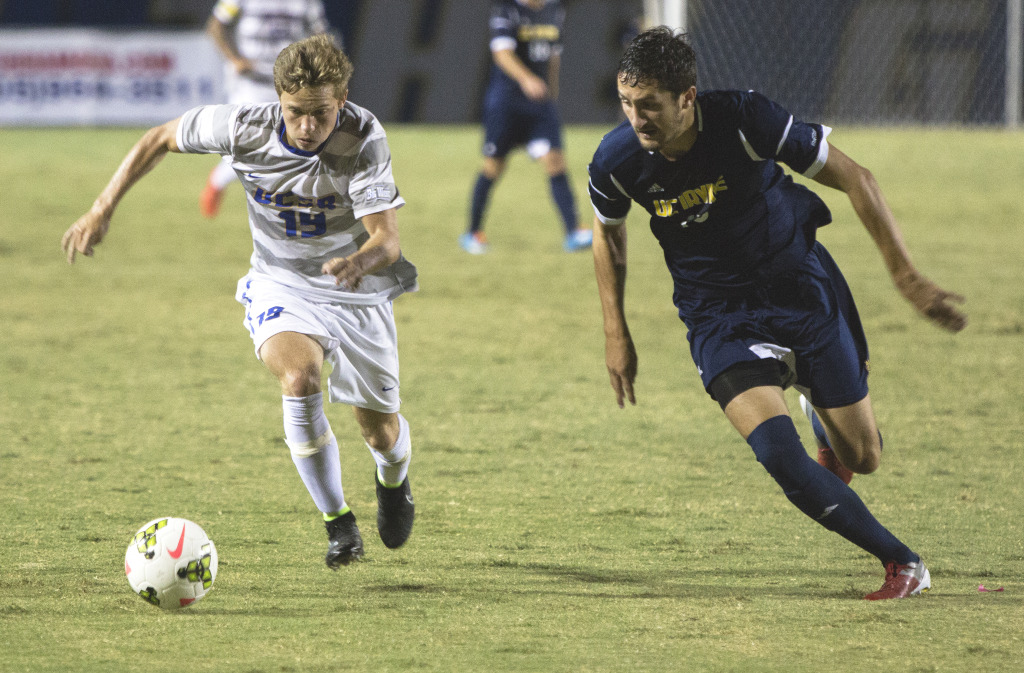 Against Northridge just two nights earlier, the Gauchos again found themselves tied late in the game.

Matador freshman defender Patrick Hickman shocked UCSB’s defense when he headed in a goal off a long cross from freshman defender Gabe Robinson just eight minutes into the match, giving his team an early 1-0 advantage.

The Gauchos were able to answer just 12 minutes later, when a corner from sophomore midfielder Drew Murphy found DePuy at the far-post. DePuy was able to play a header back across goal towards junior defender/midfielder Duncan Backus who headed it in for his first goal of the season.

The winner came in the 70th minute when freshman midfielder Axel Mendez found Murphy making a run down the left wing. Murphy sent a cross to the far-post to DePuy who was able to find good enough contact with the header to get it past the keeper and earn the Gauchos a 2-1 victory.

“Anytime you can get a good result against a great team like Northridge, you’re happy,” Vom Steeg said. “It was a bit of a tale of two halves, but we’re improving on our game management skills and that allowed us to compete in the final 15 minutes of the game when they were trying to find a tying goal.”

After notching two game-winning goals this past weekend, DePuy now leads his team with four goals on the season. Murphy, who won last week’s Big West Player of the Week award, now leads the Big West with five assists and shares team-high honors with DePuy for total points with nine.

The Gauchos return to action against Cal State Fullerton on Thursday for their first road game in a month.