The Daily Nexus
Music
Tony Bennett Show Gets Cancelled Due to Blackout
October 3, 2014 at 4:44 pm by Audrey Bachelder 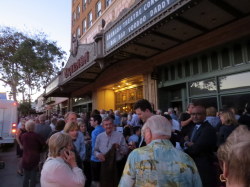 State Street had an impressive crowd of some 1,500 80-year olds in the street in front of the Granada Theatre last night, but the air was not one of delight. Duly anticipating a show by the legendary Tony Bennett, the crowd stood in long, hot lines only to be told that the Granada Theatre was postponing the show due to a blackout on State Street.

The lights between Arlington and Anapamu Streets shut off around 6:00 p.m., following a 5:30 p.m. blackout in Montecito. All of the street lights were shut off, and all the restaurants between the streets were unable to serve food. Those who already had fed their customers placed candles on tables.

In front of the Granada, the older crowd stood patiently in their dress clothes, crossing their fingers in hopes that the situation would be fixed so their $60 and up tickets to Tony Bennett would not go to waste. Bennett, who just released a new album titled “Cheek to Cheek” with none other than Lady Gaga, was due to perform at 7:00 p.m. as the opener for UCSB Arts & Lectures’ fall program.

The crowd covered every inch of sidewalk in front of the Granada, and occupied spaces the flower beds and the gutter.

At around 7:20 p.m., a manager of the Granada announced that Southern California Edison asked them to reschedule the show. She explained that she was already working on three potential dates with Bennett in the future and would let everyone know as soon as possible.

Unfortunately for the 1,500 geriatrics, on Thursday the show did not go on.

Geriatric crowd. Seriously? I’m 25, hardly geriatric and I’m sure the older demographic loved reading that one. You need to brush up on your journalism 101.

Still waiting for the re-scheduling of the Tony Bennett Concert.
Give us a clue!