The Daily Nexus
Sports
UCSB Opens Conference With Homestand
October 2, 2014 at 5:00 am by Michael Jorgenson 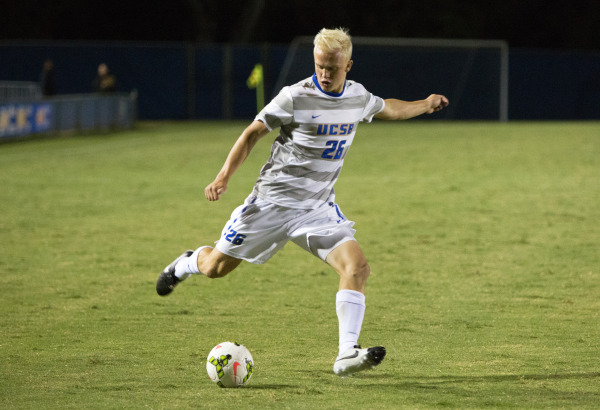 The Big West season kicks off this weekend for the UCSB men’s soccer team when it hosts conference rivals Cal State Northridge and No. 2 UC Irvine.

After two straight wins last weekend, the Gauchos enter their conference schedule with a 4-3-1 record and some much-needed momentum. In the NCAA’s first RPI rankings of the 2014 season released this week, Santa Barbara earned the No. 32 spot heading into the regular season. The Matadors come to town with a similar 4-4-1 record while the Anteaters have impressively gone undefeated at 8-0-1.

“Our conference is really, really difficult,” Head Coach Tim Vom Steeg said. “Every single team plays very, very hard and they play particularly hard against us, so it is a challenge. Nothing’s going to be easy starting with [Northridge].”

Goals could be difficult for UCSB to come by in Thursday’s matchup with Northridge as the Matadors have allowed just 10 goals to opponents through nine games. However, the Gauchos are offensively confident after coming off one of their strongest performances of the season, scoring four goals against Drake last Sunday.

“Momentum is huge. Momentum is about feeling good about how your team is and how they’re playing,” Vom Steeg said. “You don’t want to go into these next two games without feeling really good about yourself because it’s conference; it’s a different game. Especially when you’re talking about Northridge or Irvine, it feels like NCAA playoff games.”

The Matadors offense has been a one-man show thus far with senior Sagi Lev-Ari having scored a Big West-leading seven goals this season compared to two from the rest of his team. For the Gauchos, a balanced offensive attack has been a theme so far this season with their 13 total goals split between eight players. Sophomore Ismaila Jome continues to be a top offensive option as he works down the left side, while freshman forward Ludwig Ahl has emerged as a threat to opposing defenses with a team-high three goals.

Last week’s Big West Player of the Week in sophomore midfielder Drew Murphy has also impressed as he continues to take on a bigger role for UCSB, accumulating a team-high three assists to go along with his two goals.

On Saturday, UC Irvine will bring to town a powerhouse of an offense that has seen an average of 2.33 goals per game. The Anteaters have been solid with their passing in the final third of the pitch, picking up 19 assists on their 21 total goals this season.

UCSB has gone 0-3 against top 25 ranked teams this year, but the team has looked to take the positives away from those losses rather than dwell on them.

The Gauchos kick off Big West play against Northridge tonight at 7 p.m. at Harder Stadium and return to action against Irvine on Saturday the same time

A version of this article appeared on page 6 of October 2, 2014’s print edition of the Daily Nexus.