The Daily Nexus
Music
Local Natives Headline Way Over Yonder
October 2, 2014 at 5:00 am by Devon McNaughton 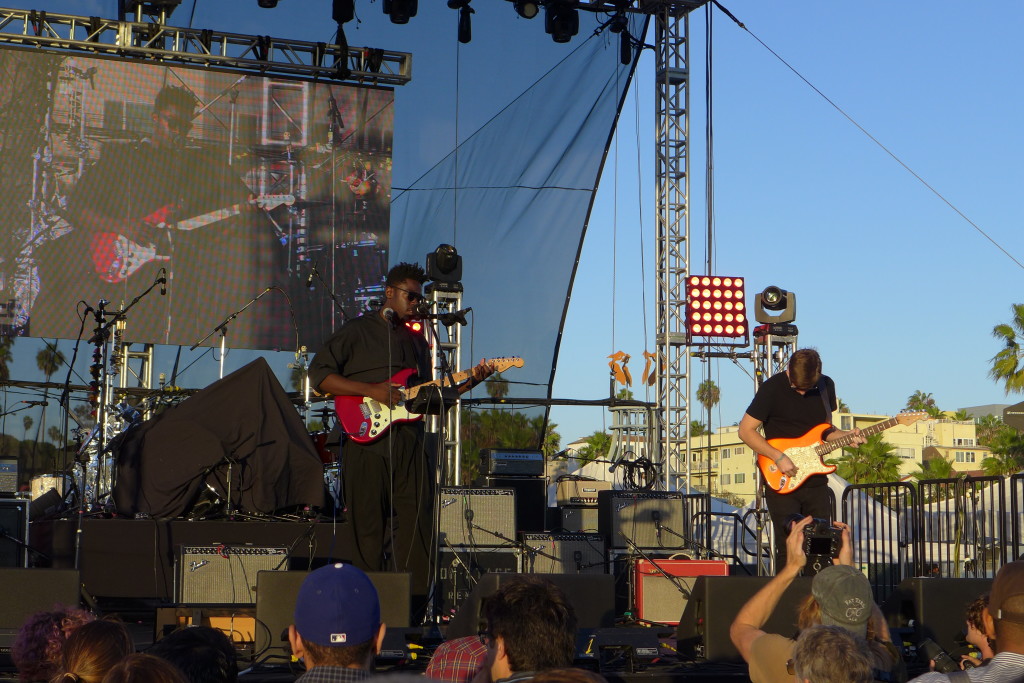 Legends of LA’s traffic abound far and wide, yet the drive down PCH to Santa Monica’s Way Over Yonder festival was shockingly painless on its opening day. The weather was a perfect, breezy 75 degrees. The ocean glittered so invitingly that it was tempting to forsake the opening acts in favor of a swim.

Luckily, WOY made it easy for attendees to busy themselves with attractions outside the festival grounds. Don’t expect the kind of self-sufficient mini world other festivals attempt to create; WOY is instead integrated within the already-fun atmosphere of the Santa Monica pier.

The grounds were relatively small and contained few dining options. Given the wealth of delicious food and entertainment available immediately outside, the few options made sense. Attendees could easily come and go throughout the day with hardly any lines until the closing acts.

The entire festival was characterized by a laid-back vibe. The crowds were never rowdy, the bar area was mellow and many of the performances felt casual. The folk genre lends well to this atmosphere and to another aspect of WOY that stood out: intimacy. There were maybe a thousand attendees at the biggest acts. There were only two stages; one main stage that dominated the festival and a much smaller one inside the carousel house. The carousel stage featured intimate, acoustic performances, but even at the main stage you could get pretty close to the performers and run a good chance of seeing them around the festival later.

Minutes after entering, in fact, I ran into loop pedal virtuoso Moses Sumney, who would perform later that day. He was extremely sweet and friendly as we chatted about WOY and his upcoming performance.

“I love the venue,” he said, mentioning that he came last year as an attendee. “It’s beautiful and the weather is just kinda perfect.”

I first heard of Sumney when he opened for Australian future soul band Hiatus Kaiyote last year, an experience he described as “brain melting.” He said he became good friends with the group and lauded them as “the heaviest soul band out there right now.”

Meanwhile, Bootstraps opened the festival at the main stage to a predictably small crowd. Dreamy, sustained guitar and glittery synth wafted from the stage as the group played with a decent amount of energy for how meager the crowd was. Their set suffered from some sound issues that were not uncommon throughout the weekend.

Alternative country band The Far West followed at the carousel stage. In the small space, the crowd felt larger than that of Bootstraps, and was certainly more enthusiastic. Clever songwriting, undeniable chops and an authentic charm characterized their performance.

In particular, frontman Lee Briante possessed a certain effortless charisma that won over the crowd. I ran into him later and asked about his musical history. He listed his parents as big influences, saying they were true music lovers and had great taste, introducing him to the likes of Woody Guthrie, Bob Dylan and Little Feat.

Houndmouth, a four-piece alt-country group from Indiana, played the second set at the main stage to a crowd heavily dominated by college kids. Their indie rock and country sound was a unique mix I hadn’t heard before, and it was nice to see a woman on the stage for the first time that weekend.

Moses Sumney stood out as the least conventionally folk act of the weekend. He used his voice and guitar to create loops and then sang over them in his Frank Ocean-esque croon, while another guitarist added subtle ornamentation. Sumney seemed endearingly shy onstage. His sparse, mellow tunes were met with great appreciation from the crowd and were a nice soundtrack to the setting sun.

Folk heavyweight Lucinda Williams saw an exponential increase in attendance from preceding acts at the main stage. She has built a deserved reputation for meticulously crafted Americana tunes and sounded just as good live as on her records. The mostly older crowd was a bit subdued, and her demeanor onstage was regrettably stiff, but technically the performance was excellent. 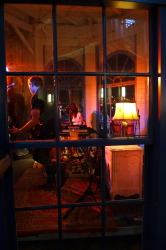 The last act to grace the carousel stage on Friday, Little Hurricane, delivered a lively set of bluesy tunes reminiscent of the Black Keys. They laid out a funky carpet and vintage end table onstage, making the already intimate show feel like it was taking place in someone’s home. The crowd fed off the energy of their performance and danced more than at any other peformance at the carousel stage. Drummer Celeste Spina wore an exhilarated smile for the entire show that was impossible not to mirror.

Making my way back to the main stage area, I witnessed the first long line of the day as people scrambled to catch Local Natives. It was apparent that many concert-goers bought tickets just for this moment. Additional lights were set up and they came on 15 minutes late, just long enough for the crowd to get antsy.

Older people and country fans who had stuck around to check them out absconded after a few songs, leaving a crowd of adoring, but subdued hipsters. Moses Sumney’s guest appearance for a Little Dragon cover was a highlight. Overall, Local Natives’ psychedelic-tinged indie rock made for a satisfying end to day one.

Day two saw the festival grow significantly more crowded. Joe Pug’s set at the carousel stage had the highest attendance of any I saw there; he seemed to be a local favorite. Though solo acoustic singer-songwriter isn’t exactly an original concept, Joe Pug is good at what he does. His Dylan-esque vocals were impeccable, his delivery personal and affecting.

Following Pug was surprise highlight Linda Perhacs. To my initial confusion, I entered the carousel house only to find half the crowd sitting cross-legged like school kids at story time. But I soon realized this was the proper way to enjoy her music and I joined them.

Her psychedelic brand of folk is difficult to describe, but it involves three-part harmonies, trippy vocal effects, acoustic guitar and synth pads. Perhacs, an adorable older lady with a kindly schoolteacher’s voice, had the crowd mesmerized.

In opposition to Perhacs, Heartless Bastards’ set did not live up to my expectations. Though the band played well, frontwoman Erika Wennerstrom seemed slightly aggravated for most of the show. Several times she interrupted songs to yell at the sound crew, killing the vibe. Her mysteriously uncomfortable stage presence made it difficult to connect with the music.

Jackson Browne closed out the weekend well with his quintessentially “folk” classics. Browne is a favorite of the Newport Folk Festival, of which he said, “it’s nice there, but it’s nicer here,” a high compliment.

His no-frills set mixed old standards with new tunes from his forthcoming album, and the crowd adored him. He forgot a verse to “These Days” (one of his biggest hits) and said with a laugh, “I’ve forgotten a lot of words in my time, but never the words to that song,” to which the crowd cheered.

The casual atmosphere, intimate performances and vibrant location of WOY set it apart from any other festival I’ve been to. The ease with which one can leave the revelry to enjoy Santa Monica prevents burnout and keeps the experience fresh. However, it has the potential to discourage attendees from discovering new bands, since watching an act you’ve never heard of might seem dull in comparison to a dip in the ocean or a ride at the nearby amusement park.

WOY rewarded those who stuck around with a lineup of diverse and (mostly) excellent acts that were a joy to experience against the idyllic backdrop of the pier. Did Way Over Yonder succeed in having the influence of its sister festival, Newport Folk? Not really. Did it succeed in putting on a really fun weekend? Absolutely.

This story originally appeared on page 12 of Thursday, October 2, 2014’s print edition of the Daily Nexus.