The L.A. Songstress on Recording, Travel-Addiction and Redheads 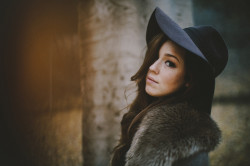 On most mornings when she’s not touring, Lily Kershaw wakes up in her airy room in Los Angeles with a melody in her head. Her cathedral arched windows allow just the right amount of light to get her up, prompting her to grab one of the four guitars lying around her collection of vintage 60s furniture. She starts the day nestled into a parrot-patterned loveseat that was her grandparents’ with a cup of Joe to work on a song and figure out what it wants to be. She is, in her words, “a slave to the music.”

A 23-year-old singer-songwriter who has been writing since age 13, Kershaw gained international attention in 2012 when her song “As It Seems” appeared on season seven of “Criminal Minds.” Almost overnight, people around the world were buying the song, and it eventually reached #1 on the iTunes Singer/Songwriter Singles Chart.

In 2013, she recorded her debut album, Midnight in the Garden, in just 14 days. It was a fast-paced and intimidating project for the fledgling artist, who had little-to-no experience in the studio. “I literally woke up every night the week prior in a sweat,” remembers Kershaw. “I kept thinking, ‘how am I supposed to do this. How do you make something out of nothing?’ I had these songs and these guitar parts, but I couldn’t imagine bringing them to life.”

From that intense process, Kershaw learned to immerse herself into production, be brave and go with her gut. “There wasn’t a lot of time to figure it out and plan,” she explains. “I hadn’t developed that part of my ear yet for what I wanted surrounding songs I had written acoustically. Now that ear is super developed and I hear instrumentation that I want — the guitar, the piano, the banjo.”

Following Midnight in the Garden, Kershaw headed to France for promo and finished a residency at the legendary Hotel Café, a Hollywood coffee shop that has supported the careers of fellow acoustic women Sara Bareilles, Katy Perry, Ingrid Michaelson, and Meiko. Kershaw toured Canada and the States, followed by another trip to France in the spring of 2014. This last year has been spent mostly on the road, with small breaks to stay at home and hole up in her room and write.

Traveling so much has got Kershaw addicted. “I’ve been in L.A. for the last couple of months, and I feel like I need the daily change. It’s becoming a bit of a habit [to be on the road],” she gushes. “There’s something really thrilling about not knowing — every day you meet a bunch of people and learn about them and their lives. I really get curious about people on tour and I end up asking a million questions. And I probably frighten all of them.”

On her wish list of places to tour are India, Ireland and Scotland — but especially Ireland and Scotland. The attraction has to do with their dark, romantic rainy-ness. Plus, she’d fit right in. “I’m a redhead, I’ve got freckles and I’m pale. I feel like I’d be amongst my people,” Kershaw laughs.

Speaking of redheads, Kershaw has this grand idea she has yet to propose to British acoustic star Ed Sheeran: the Redhead Only Tour. Redheads would perform, work on production, sell tickets, and volunteer as clean-up crew. “I think it would be so funny. [I want to] show some ginger love to a dying breed,” she says. “Tell all your redhead friends that they’ll get free tickets.”

In a note of seriousness, Kershaw admitted that someone tried to kidnap her once. “But I can’t talk about that,” she says, somberly, before unleashing some details. “I did have a situation where somebody wanted me to leave with them and security was called. Life is weird as a musician!” When asked whether she would put the escapade into a song, she laughs. “I think I’m just gonna try to avoid kidnappers in the future — nobody come take a nap near me! Maybe that will be the song. No naps allowed.”

Contrary to her bubbly, effervescent personality, Kershaw’s music speaks of another side of this adorable songstress — a darker, aching side haunted by nostalgia. Midnight in the Garden is filled with stories of heartbreak and death. “The first record I wrote was between the ages of 17 and 21, and it was the transitory time when you’re figuring out new aspects of yourself and you’re having some real life experiences.”

There’s been a lot of loss for Kershaw — a close high school friend of hers passed away shortly after leaving for college, a good friend and “Sons of Anarchy” actor named Johnny Lewis died tragically in 2012 and just in the last two weeks she’s experienced the death of her grandfather and a best friend’s father. These experiences have inspired this already-prolific writer. “I’ve been writing a lot more than usual just because there are more things on my mind, a lot more things I wanna get out of my body. Different types of sadness.”

Lily Kershaw’s art is that she takes the hard stuff from life — death, breakups, loneliness, depression — and places them into a song as a way of healing. It’s a way to take life head on and receive closure, and this feeling of compassion and triumph resonates with her adoring audience, who has made sure that Midnight in the Garden hit the #5 spot on iTunes Singer/Songwriter Album Chart.

Songwriting allows Kershaw to maintain her ordinarily happy, sweet, grateful self; a girl whose friends call her “baby cat” and whose life aspirations include touring with Damien Rice and saving all the elephants in the world. In addition to her thanks for the existence of motorcycle boots, the color black and Paul Simon, big thanks from Kershaw goes to her record label Nettwerk for giving her creative control.

Lily Kershaw is headlining SOhO on Wednesday, Sept. 10 at 7:30 p.m. as part of her “Like the Sun Tour” through the States and Canada. Tickets are $8 on http://www.sohosb.com/. For more information about Lily, go to http://lilykershaw.com/.