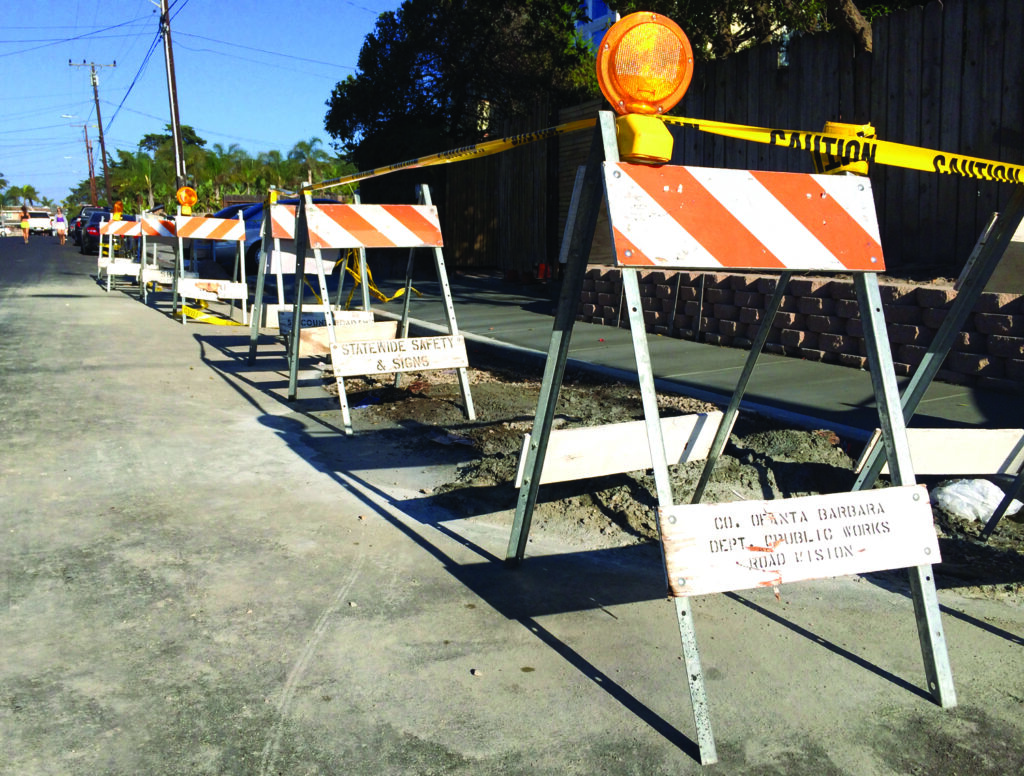 Students returning to Isla Vista this fall will find some typically non-existent or run-down sidewalks newly constructed and repaired thanks to a Santa Barbara County renovation project that aims to improve I.V. infrastructure.

Construction began last Monday as a part of the Isla Vista Pedestrian Plan, a Santa Barbara County project announced by Third District Supervisor Doreen Farr that plans to improve pedestrian walkways in I.V. The construction is a part of a four-phase sidewalk project that will renovate and install new sidewalks from the 6500 block to the 6700 block of Del Playa Drive, with construction slated to be completed in three to five weeks.

In addition to the sidewalk plan, the County is also working on projects to improve lighting by adding new streetlights to the currently dim Camino Corto and new lighting for the also dark Camino Del Sur beach access area.
According to Farr, the Isla Vista Pedestrian Plan was made possible with state funding that has been accumulating since I.V. was a Redevelopment Area, or RDA, a low-income community requiring financial aid in order to establish sound infrastructure and maintenance.

“There was a clear need for improvements, and specifically the issue of safety spurred us,” Farr said. “The idea was to reinvest money in the community. To better it and help property owners increase value and property tax in order to see more money flow back into the community.”

Some previous improvements include the Pardall Road corridor renovation, new storm drains, high quality streetlights and wider sidewalks at the Loop and in the El Embarcadero area, Farr said.

“The sidewalk renovations have allowed restaurants to expand and to incorporate sidewalk dining, which has created a nice downtown ambiance of a small town community, [which] is also good for business,” Farr said.
But while I.V. was once a poster child for redevelopment because of its high rate of community involvement, in 2012 the state decided to eliminate RDAs, leaving the county and its residents with lack of funding for the expensive sidewalk plan, a project costing just under $4 million, according to Farr.

The project is now funded through a series of grants from the County and UCSB, including community development block grants from the county board, 1990 Long-range Development plan funds that are usually used for lower-income communities, $100,000 out of the county’s general fund and thousands of left over dollars from a county grant “generously contributed” by the university, Farr said.

But while the sidewalks will physically improve DP, students such as fourth-year biopsychology major Lynn Nguyen said the sidewalk plan may not be an effective solution to I.V. safety, nor an efficient allocation of money.

“New sidewalks sound really great … but because so many people walk on the street, I imagine that people will continue walking in the streets even if there is a fresh sidewalk to stomp around on,” Nguyen said. “It may take a while to break into this Isla Vista, DP culture we’ve got going on, so maybe the money would have been better spent in a different way.”

Tanya Silva, a fourth-year biopsychology major living on the 6600 block of DP, said although the construction in front of her house has been a disturbance, the future improvements will be worth the annoyance.

“Although the construction on the street is rather annoying, the completion of new sidewalks will far outweigh the inconvenience,” Silva said.

“Construction will pass sooner and later while the benefits of these developments will last and leave an impact on future residents.”
According to Farr, the I.V Pedestrian Plan is a step in the right direction toward the progression of I.V.

“It is exciting to see these improvements take shape so quickly [and] to be completed within the next few months,” Farr said, “They are needed and the community deserves to have them.”

A version of this story appeared on page 4 of Wednesday, August 27, 2014’s print edition of the Daily Nexus.